Truth Comes to Light editor’s note: A friend of this site, living in Belgium, sent the following account of the May 1st freedom rally in Brussels, Belgium.  She is a healthcare professional with children, risking her own career by standing up for truth and for freedom. English is not her first language. All of the photos below, as well as the cover photo, were provided by her.  ~ Kathleen

Labour day in Belgium. The day nobody works. Or at least only a small part does.

This year, however, for the second time around, it is forbidden to meet each other, to enjoy the company of friends and family. Or more precisely, you can do that but under strict regulations. This so-called pandemic has altered our society in its very essence. Fun is no longer a part of it. Labour is.

So today, instead of meeting with friends we can no longer see, we went to Brussels, the capital of our country. Europe’s hell hole, as Trump used to say. How true his words turned out to be, but not in the meaning I used to think.

A group of youngsters have been organizing a protest march each week by cycling trough a part of Brussels. They traditionally start in a forest, called Bois de la Cambre. This Forest has become the symbolic place of resistance against the oppressive government and the changes to our society they want to push through.

On April 1, Fools’ Day, a collective had made this joke about a number of dj’s that would come to this Forrest. To host a party: ‘la boum’, French for ‘the party’. Everybody knew that it was a joke and the dj’s on the playlist were from abroad. Everyone knew it was impossible, our borders are still closed. A lot of young people went to the Forrest anyway.

It was a very bright and sunny day and they were (and still are) fed up with the prohibition to live the way young people do. They wanted a party after more than a year of waiting on ‘flatten the curve’. But the police, or better our minister of internal affairs, gave the order to chase the people away with all the means and violence necessary to do so.

And this is what happened, violence against peaceful citizens. Bois de la cambre became a symbol.

Today we started our cycling tour from a park in the middle of Brussels. A lot of people turned up and we got a lot of sympathetic reactions, but also a lot of frightened looks from completely brainwashed and masked spectators. 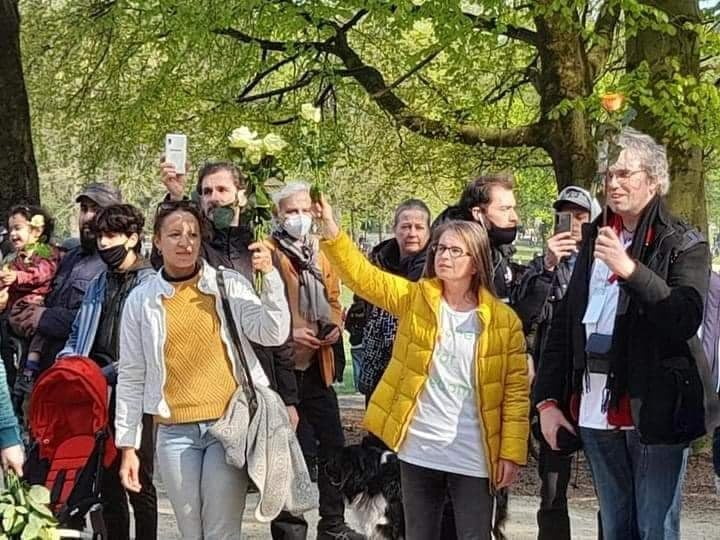 Afterwards we went to Bois de la Cambre, because ‘la boum 2’ was organized. This time it was different. First there were a lot of people dressed in a light blue vests with on their backs the words: ‘a superhero wears a mask’. They really think we are still toddlers, I guess.

It became immediately obvious that they were police officers. They gathered together to protect a police car in a way only trained staff do. There was also a group present with a very clear goal: starting a fight. They were dressed in black, with combat shoes.

Somebody told me they looked like Antifa. We never had Antifa in Belgium but it wouldn’t surprise me. Of course, this is the only thing main stream media will show, but we know better and since we no longer watch main stream media, who cares?

We will keep protesting because it is no longer a choice. It is a duty. As somebody told me recently, it is not a question whether these protests change anything, it is a matter of doing what is right.

An account of the May 1st protest gathering can also be found at the facebook page of lawyer Carine Knapen, who attended the protest. You will find details of the event, along with videos and more photos. 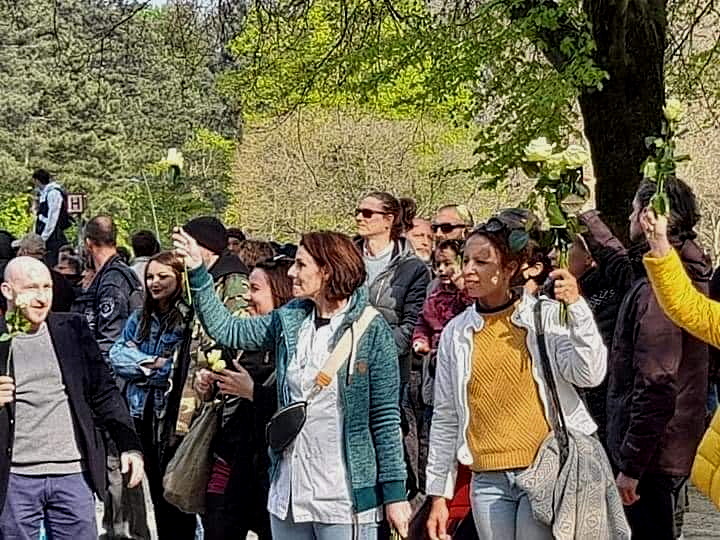 The following is an unofficial, rough translation from Dutch.

No fines but no dialogue either — only water canons, teargas and beatings without reason. The people were not asked to leave the forest. They were beaten up heavily without warning.

I personally witnessed a couple of people sitting on a fallen tree that were pulled of violently, and if that was not bad enough, 2-3 robocops started to beat on a man who was already fallen to the ground.

An unknown gas was used to spray in people’s faces. Not only in the Forrest but also in the streets around the area. Citizens were treated like heavy terrorists. The act was completely disturbed, sickening, criminal. 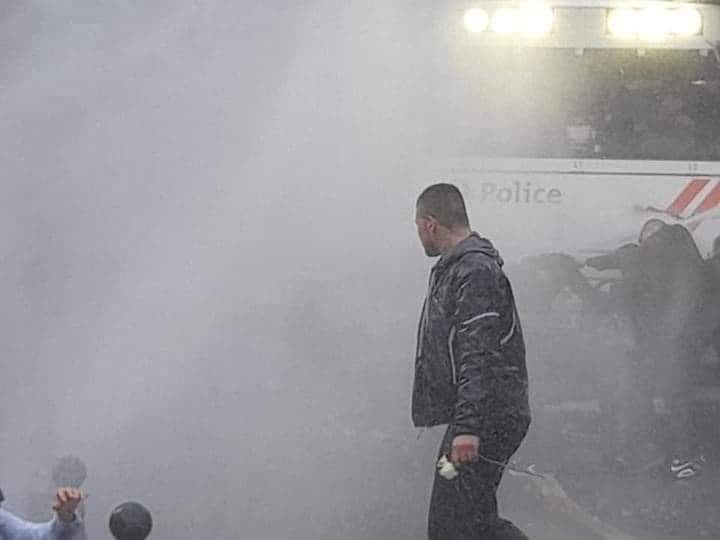 Somebody asked what this stuff was and a robocop answered that is was a disinfectant. Yeah right!

Before the intervention of the violent robocops it was all peaceful. Young people were dancing, others were talking in little groups. Some had banners. Others were there to support and to watch. [See video]

The only thing these people ‘did wrong’ was that there were too many of us. According to a ministerial decision — which was ruled unconstitutional by a court marshal — a gathering can’t be more than 50 persons, which is nothing. And gatherings can’t exceed more than 10 people.

Proof has already been given since a lot of large gatherings have occurred around the world without anybody getting sick. 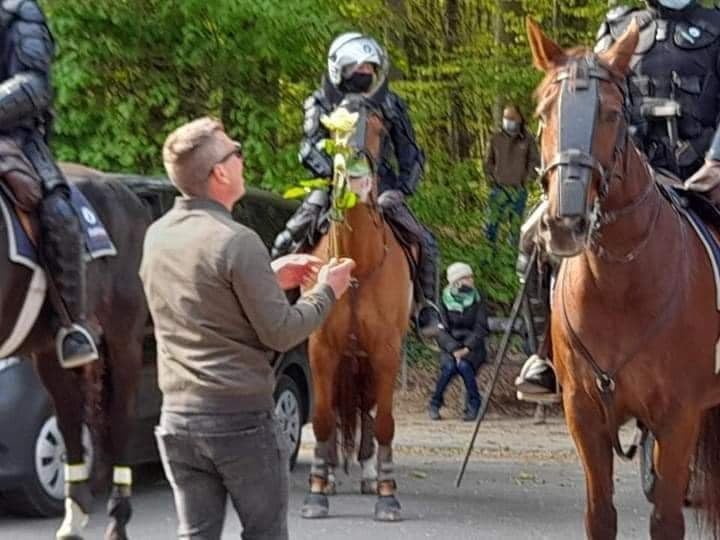 After the police came, everything changed. Citizens tried to offer white roses to the cops but they were sprayed with a mixture of water, sand and paint by these very men.

People tried to sit on their knees to prevent the water canons to push back the crowd. But all in vain. They drove at high velocity over the lawn, hitting a man of 60 during this action.

Parents of children present in the park formed a chain against the robocops to protect their children. Citizens were brutally treated (dégage was the order- French for ‘fuck off’), beaten with sticks, sprayed with an unknown gas and locked in when they wanted to leave. They could not, it was inhumane. 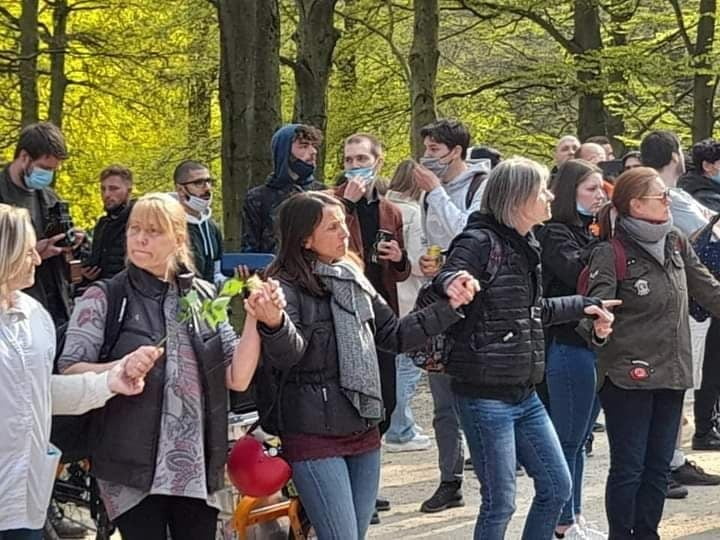 I got a lot of videos and pictures of the event. I only posted some, but the rest I will keep as proof. I received some pictures of myself and I posted one because he shows how I feel and still feel. Immensely sad.

On March 20, 2021 we already encountered police brutality after our peaceful walk in the Bois de la Cambre.

But what happened on May 1 excelled this. It was like a scene in a movie, but it was real.

After sitting on the ground with several others to prevent the water canons from driving back the people, I walked the line of robocops, who were fully armed. 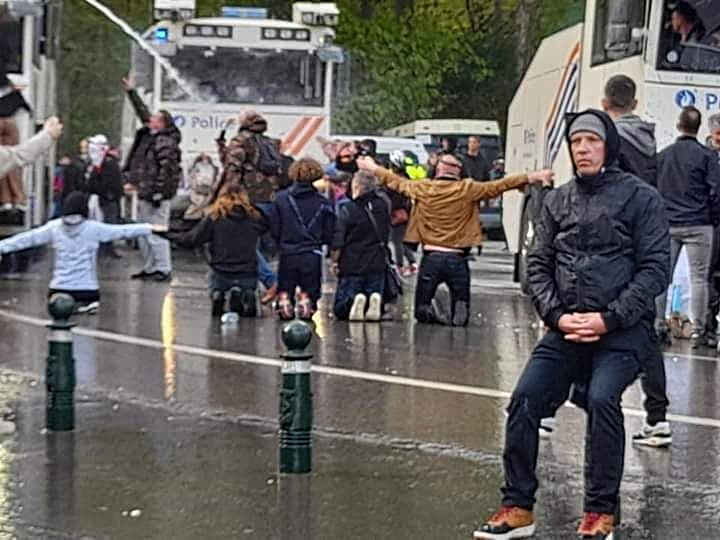 It was surreal to see them on one side of the street and to see the unarmed chain of parents and children on the other side with white roses in their hands forming a barrier to protect the children. They begged to stop this. Multiple parents went to the robocops to talk to them saying, ‘Take off your helmets, stand by our side. The police is our friend, not our enemy.’  But it was all in vain.

I addressed the officers in command. ‘Stop this, please. This is not necessary. Why do you do this? These people do nothing wrong.’ The first person pushed me aside and told me to ‘fuck off’ (in French). The second one looked down on me as if I were a lice on a dirty coat. ‘Are you serious? Let me do my job’, but I answered that this was not a job but a crime against humanity. But this didn’t help either.

I couldn’t believe what I saw. Baffled doesn’t cover it. It brought me to tears and it stayed that way. I am still in shock. 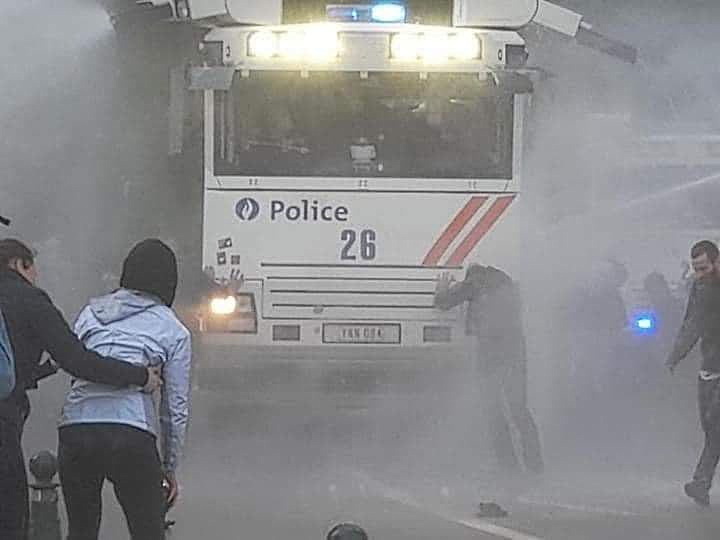 I saw what they did afterwards. It looked like a war. WWIII. I will never forget this.

The unnecessary violence against good citizens just because they were there. The water canons, the gas, tear gas that was thrown and the way they closed us in. I saw how policeman on horses chased young people fleeing the scene and forced them to go back instead of leaving.

I saw how robocops prepared themselves for a second attack by putting on gas masks used to protect against chemical agents and going into the woods to search for people.

Today I am still shocked at what has happened. And I still can’t understand something like this can take place in a country that calls itself a democracy.

Be the first to comment on "May 1st Freedom Rally in Brussels Belgium: Police Violently Assault Peaceful Protesters Without Warning"