Decades ago, the Environmental Protection Agency (EPA) was responsible for alerting Americans to biological and environmental risks from exposure to cell phones and other sources of wireless and electromagnetic fields (aka “Electrosmog”).

Thanks to Environmental Health Trust for providing more information about how the EPA was prevented from adequately protecting the public.

Please see below an important document. It is a Petition for Writ of Certiorari to the United States Court of Appeals for the Second Circuit from September 8, 2000. It clarifies how decades ago, when FCC limits were set, the EPA was defunded from properly reviewing the science on harm from electromagnetic fields.

It is not that the laws we have are inadequate… it is that we literally have no laws and no agency with oversight when it comes to impacts to our flora and fauna- the environment.

“The real problem here is that the most recent FCC standards set in 1996, are still based on thermal effects, despite newer information coming from scientific sectors largely outside of the U.S. The current FCC standards were adopted from decades old research reviewed by the National Council on Radiation Protection (NCRP Report No. 86, issued April 2, 1986), and from the American National Standards Institute (EEE Standard for Safety Levels with Respect to Human Exposure to Radio Frequency Electromagnetic Fields, 3kHz to 300 GHz, approved Sept. 26, 1991, with a cut-off date for scientific papers of December, 1985).”

“Both Professional agencies have a 5-to-7 year built-in time lag in their review process, and their respective RF committees are comprised almost entirely of physicists, engineers and bioelectromagnetics researchers — not professionals from the public health sector. In other words, dated, inappropriate research, reviewed by authorities from inappropriate professions, is being used to reach conclusions about public safety concerning radio frequency radiation. Why has there been no better up-dating of the FCC standards? The answer is obvious: because *25 Congress has not appropriated adequate funds to conduct nonthermal research by the key federal agency — EPA.”

“The Court’s reliance on the EPA was technically correct but substantively naive. What the Court did not realize was that Congress terminated funding for radiation research by EPA in 1996, and no staff has been available at EPA to conduct such research for the past five years.”

“The Court’s reliance on the EPA was technically correct but substantively naive. What the Court did not realize was that Congress terminated funding for radiation research by EPA  in 1996, and no staff has been available at EPA to conduct such research for the past five years.” 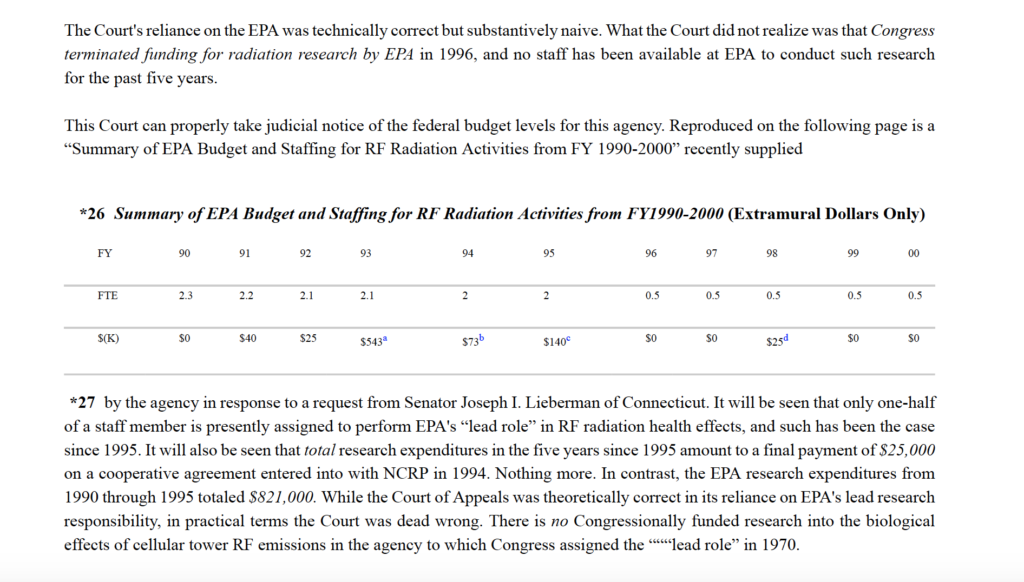 Currently there is no U.S. Government-funded research program into the non-thermal biological effects of RF emissions to the environment. The EPA, which formerly conducted such research, lost all of its research funding in 1996, and has done nothing since.  In July 2020 the Director of the Radiation Protection Division of the EPA  Lee Ann B. Veal wrote Theodora Scarato Executive Director of EHT that  the EPA had no funded mandate to regarding wireless radiofrequency matters and that they are not aware of any developed safety limits or research reviews related to impacts of wireless on birds bees and the environment. Read the letter. The EPA stated their last research review was their 1984 Report. The FCC confirmed in a USTTI webinar October 15, 2020 that their limits were for humans only.

Thus when companies state that proposed antennas are FCC compliant, this has no applicability to protections for bees,  trees or the environment. As the scientific literature amply demonstrates, findings demonstrate the pressing need for a heavily-funded federal environmental-oriented research program and compliance with NEPA that considers impacts to wildlife from the increased radiofrequency radiation.

The Federal Communications Commission (FCC) – not a health or environmental agency – replaced the EPA as the regulatory agency assigned to protect Americans from the telecom industry. They have done the exact opposite for decades and have become more dangerous since Trump was elected. Despite research proving harm, they refuse to update 24-year-old federal RF radiation exposure guidelines. Lawsuits have been filed against the agency for NOT protecting the public from unsafe levels of radiation as well as 5G deployment on land (see 1, 2, 3, 4, 5, 6) and in space (see 1, 2).

For many years, various health experts and organizations – including the World Health Organization (see 1, 2), American Academy of Pediatrics (AAP), and American Academy of Environmental Medicine (AAEM) have recommended that we reduce our exposure to sources of wireless radiation (Bluetooth, cell phone, WiFi).

High-speed internet CAN be achieved without wireless and without 5G. According to Federal Communications Commission Chairman Ajit Pai – and a LAWSUIT filed against the agency – Americans have paid to have this already.

Be the first to comment on "EPA Was Defunded from Reviewing Research Proving Harm from Cell Phone Radiation, WiFi, Other EMFs 20 Years Ago"