“If our sin as scientists was to make and use the atomic bomb,” Leo Szilard, famed physicist would admit, “then our punishment was to watch The Beginning or the End.” Szilard’s exposure to the 1947 MGM movie, however, went far beyond merely enduring a viewing of the first Hollywood drama about the creation and use of the bomb. The previous year he had traveled from Chicago to Los Angeles to offer his input on key scenes, then signed a contract agreeing to be portrayed in the movie – and after much cajoling, convinced Albert Einstein to sign his own approval.

Szilard would not be the only atomic scientist to express disappointment in the big-budget film, which drew mixed reviews from movie critics and modest box office receipts. The project, after all, had shifted 180 degrees from its inception, when it was inspired by the scientists as a warning against building new and bigger bombs. Now it was little more than error-ridden, pro-bomb propaganda.

It had started with an urgent letter from a worried scientist at Oak Ridge to his former high school chemistry student, actress Donna Reed. Now it concluded with a scene at the Lincoln Memorial, with the one voice of conscience remaining in the script, a young scientist named Matt Cochran, addressing his wife – as a ghostly figure. Despite having just perished in an accident while arming the Hiroshima bomb (which would then slaughter 125,000 others), he assures his widow, in cloudy, apparitional form, “God has not shown us a new way to destroy ourselves. Atomic energy is the hand he has extended to lift us from the ruins of war and lighten the burdens of peace…. We have found a path so filled with promise, that when we walk down it we will know that everything that went before the discovery of atomic energy was the Dark Ages.” 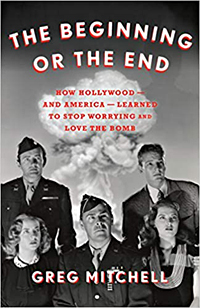 How and why did that transpire? The full story is told for the first time in my book, published this week, The Beginning or the End: How Hollywood – and America – Learned to Stop Worrying and Love the Bomb.

Once MGM bought out a rival project (with a wild script by none other than novelist Ayn Rand) from Paramount, it had clear sailing to take any route it desired. Legendary studio chief Louis B. Mayer, in approving the project, had insisted that it become the “most important” movie he would ever present. Producer Sam Marx was relatively liberal for a movie executive in that era of Hollywood. Mayer, in contrast, was a hardcore conservative and turned the overall managing of the project to one of the most rightwing activists in town, James K. McGuinness (later a prominent promoter of the blacklist and McCarthyism).

Even more critical to the outcome, the studio paid the then-enormous sum of $10,000 to General Leslie R. Groves, director of the Manhattan Project, for his exclusive services, and essentially granted him final approval of the entire script (a power he would exert, to the max). The scientists served only an advisory function. They were able to successfully fact-check some technical aspects, but had no authority to force any changes in tone or message and were paid little or nothing for their services.

Ultimately, mainly thanks to Groves, the movie would not only fully endorse the decision to use the bomb against Japan, but rewrite history to support that conclusion. For example, it repeatedly referred to the U.S. “showering” the target cities with leaflets explicitly warning that a new weapon was on the way – while eliminating plans to reveal some of the human effects of the bomb on the ground in Hiroshima. And Nagasaki? In the end it wasn’t even mentioned once.

Elsewhere, the script was adapted to emphasize the desire to portray the atomic attack in a heroic way, and as one absolutely necessary to save America from meeting the same fate. FDR now claimed that his psychological warfare experts told him that the “Japs will fight right down to the women and children.” Now the “light flak” greeting the American bombers near Hiroshima – already an enormously revealing falsehood – has been transformed into “heavy flak.” Even worse, when purely fictional Japanese fighter planes approach the Enola Gay, they are so close (in the movie) that the Americans need to return fire! The accident that dooms Matt Cochran’s life now occurs before Hiroshima, as he arms that bomb, not in the run-up to Nagasaki.

This enabled the script to totally eliminate any depiction of the even more questionable second bomb. Equally revealing (although ultimately cut from the final script): the addition of two new, fictionalized, warnings about the Japanese obtaining atomic weapons to greet a US invasion. Where was their lab located? In Hiroshima, of course.

Finally, the White House, which also had veto power in its pocket, got crucially involved, with Truman and his press secretary Charles Ross, ordering a costly retake (an unprecedented order from the Oval Office in the history of Hollywood) of the key scene showing the president explaining his reasons for deciding to drop the bomb. Truman even got the actor playing him fired. He wanted someone with more of a military “bearing.”

On its release, the film’s “cheery imbecility” would be mocked by James Agee in his Time magazine review. Life magazine would call it “hokum” and “full of flossy but trite hopes for a better world.” Yet its overall message, and in some cases falsifications, endure to this day in the enduring Hiroshima Narrative of justification. As long as most in the media and government endorses the double use in 1945 the more likely we will see a first-strike (which is official US policy) in the future.

Greg Mitchell has written a dozen books. His latest is The Beginning or the End: How Hollywood – and America – Learned to Stop Worrying and Love the Bomb (The New Press).