Across the United States, people are taking to the street to protest racist police violence, including the tragic police killings of George Floyd and Breonna Taylor. This is a historic moment of reckoning for law enforcement. Technology companies, too, must rethink how the tools they design and sell to police departments minimize accountability and exacerbate injustice. Even worse, some companies profit directly from exploiting irrational fears of crime that all too often feed the flames of police brutality.

So we’re calling on Amazon Ring, one of the worst offenders, to immediately end the partnerships it holds with over 1300 law enforcement agencies.

One by one, companies that profit off fears of crime have released statements voicing solidarity with those communities that are disproportionately impacted by police violence. Amazon, which owns Ring, announced that they “stand in solidarity with the Black community—[their] employees, customers, and partners — in the fight against systemic racism and injustice.” 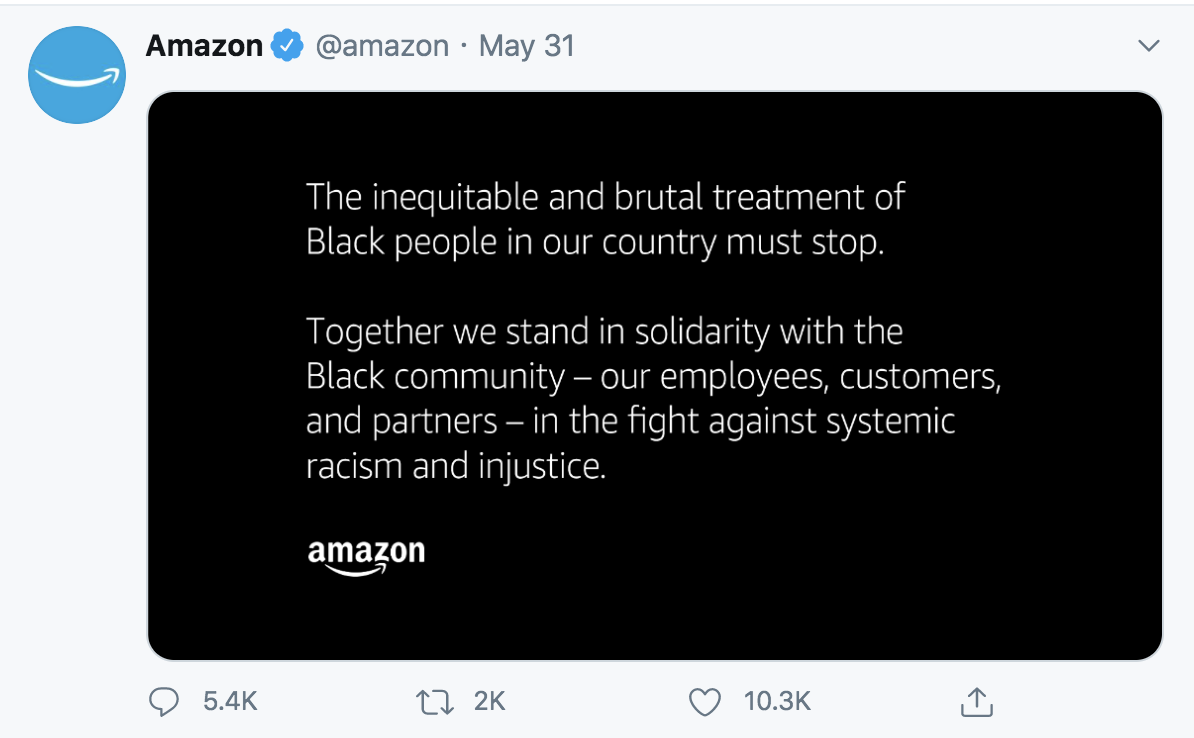 And yet, Amazon and other companies offer a high-speed digital mechanism by which people can make snap judgements about who does, and who does not, belong in their neighborhood, and summon police to confront them. This mechanism also facilitates police access to video and audio footage from massive numbers of doorbell cameras aimed at the public way across the country—a feature that could conceivably be used to identify participants in a protest through a neighborhood. Amazon built this surveillance infrastructure through tight-knit partnerships with police departments, including officers hawking Ring’s cameras to residents, and Ring telling officers how to better pressure residents to share their videos.

Despite Amazon’s statement that “the inequitable and brutal treatment of Black people in our country must stop,” Ring plays an active role in enabling and perpetuating police harassment of Black Americans. Ring’s surveillance doorbells and its accompanying Neighbors app have inflamed many residents’ worst instincts and urged them to spy on pedestrians, neighbors, and workers. We must tell Amazon Ring to end their police partnerships today.

We’ve written extensively about why Ring is a “Perfect Storm of Privacy Threats,” and we’ve laid out five specific problems with Ring-police partnerships. We also revealed a number of previously-undisclosed trackers sending information from the Ring app to third parties, and critiqued the lackluster changes made in response to security flaws.

To start, Ring sends notifications to a person’s phone every time the doorbell rings or motion near the door is detected. With every notification, Ring turns the pizza delivery person or census-taker innocently standing at the door into a potential criminal. And with the click of a button, Ring allows a user to post video taken from that camera directly to their community, facilitating the reporting of so-called “suspicious” behavior. This encourages racial profiling—take, for example, an African-American real estate agent who was stopped by police because neighbors thought it was “suspicious” for him to ring a doorbell.

Ring Could Be Used to Identify Protesters

To make matters worse, Ring continuing to grow partnerships with police departments during the current protests make an arrangement already at risk of enabling racial profiling even more troubling and dangerous. Ring now has relationships with over 1300 police departments around the United States. These partnerships allow police to have a general idea of the location of every Ring camera in town, and to make batch-requests for footage via email to every resident with a camera within an area of interest to police—potentially giving police a one-step process for requesting footage of protests to identify protestors. In some towns, the local government has even offered tiered discount rates for the camera based on how much of the public area on a street the Ring will regularly capture. The more of the public space it captures, the larger the discount.

If a Ring camera captures demonstrations, the owner is at risk of making protestors identifiable to police and vulnerable to retribution. Even if the camera owner refuses to voluntarily share footage of a protest with police, law enforcement can go straight to Amazon with a warrant and thereby circumvent the camera’s owner.

The rapid proliferation of these partnerships between police departments and the Ring surveillance system—without oversight, transparency, or restrictions—poses a grave threat to the privacy and safety of all people in the community. “Fear sells,” Ring posted on their company blog in 2016. Fear also gets people hurt, by inflaming tensions and creating suspicion where none rationally exists.

Consider that Amazon also encourages police to tell residents to install the Ring app and purchase cameras for their homes, in an arrangement that makes salespeople out of what should be impartial and trusted protectors of our civic society. Per Motherboard, for every town resident that downloads Ring’s Neighbors app, the local police department gets credits toward buying cameras it can distribute to residents. This troubling relationship is worse than uncouth: it’s unsafe and diminishes public trust.

Some of the “features” Ring has been considering adding would considerably increase the danger it poses. Integrated face recognition software would enable the worst type of privacy invasion of individuals, and potentially force every person approaching a Ring doorbell to have their face scanned and cross-checked against a database of other faces without their consent. License plate scanning could match people’s faces to their cars. Alerting users to local 911 calls as part of the “crime news” alerts on its app, Neighbors, would instill even more fear, and probably sell additional Ring services.

Just today Amazon announced a one-year moratorium on police use of its dangerous “Rekognition” facial recognition tool. This follows an announcement from IBM that it will no longer develop or research face recognition technology, in part because of its use in mass surveillance, policing, and racial profiling.

We’re glad Amazon has admitted that the unregulated use of face recognition can do harm to vulnerable communities. Now it’s time for it to admit the dangers of Ring-police partnerships, and stand behind its statement on police brutality.