Public shaming is nothing new, and neither is shaming others on social media. Now people have taken it to an entirely new level by shaming those on social media who are violating social distancing rules.

From Facebook to the community app Nextdoor, people have flooded social media platforms to criticize others who are violating public health orders. Some are complaining about their neighbors hosting wild quarantine parties, while others are disgusted by joggers panting on others.

Experts fear the rise of the surveillance state is being ushered in by the coronavirus pandemic. And people snitching on others and posting it on social media will become normalized in a post-corona world, reported AFP News.

“It distresses me greatly to see a few uncaring louts who scoff at the safety rules that are meant for all of us to get through this awful situation,” said one user on a listserv for a wealthy suburb of the capital Washington, which has seen a slew of complaints about people ignoring distancing guidelines. 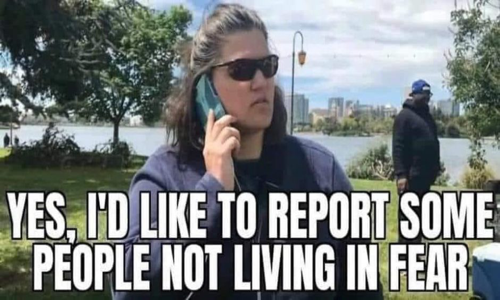 “I have a suggestion – if you see such behaviors as mentioned above – why not take photos/videos of the offenders? This could discourage their dangerous behaviors,” said another.

Online shaming has been around for at least a decade or two. What has developed during the pandemic is that some people believe it’s their civic duty to enforce public health orders by shaming those who violate it on social media, which adds a new layer to the police state of your neighbor doing the bidding for Big Brother.

“There is a sense that if you do it you can save lives… With COVID-19, we’re scared and there is an urgency to enforce the social distancing rules. Shaming is really one of the only tools we have,” says Dr Emily Laidlaw, an associate professor at the University of Calgary who studies privacy law and online shaming.

Activist Post Recommended Book: Snitch Culture: How Citizens Are Turned Into The Eyes and Ears Of The State

Most of the shamming is occurring on Facebook, Twitter, Instagram, and Nextdoor, via posts that have names, locations, and or even images or videos detailing how social distancing rules were violated, it can be extremely dangerous and allow the government to conduct unprecedented snooping operations.

“My neighbors are all drunk and having a party next door. One of them went on a loud tirade near my door that another month of quarantine is stupid and that he wasn’t going to do it,” posted one frustrated resident of a middle-class west Los Angeles neighborhood recently.

“You need to report them when it’s happening because that just means another month for us to be indoors,” another user replied.

As we’ve noted, the government has already taken action to monitor the locations of everyone via their smartphones to make sure social distancing is being followed. In combination with neighbors shaming others on social media where the government can easily see, well, our freedoms and America we use to know will not exist in a post-corona world, as the rise of the surveillance state becomes more evident.

Wicca Davidson, who manages communications for a municipality in Maryland, said there’s a noticeable increase in social media posts of people snitching on others for violating public health orders as the pandemic unfolds.

“We don’t want to give a few people the ability to derail the use of the listserv,” she told AFP.

But “there is a cost that should be acknowledged — casualties who are taken down by this unfairly, and the normalization of neighborhood surveillance,” Sonti said.

Another social media user around the Washington Capital Beltway fears the rise of the surveillance state:

“I sympathize with the concern but becoming a police-state type of community isn’t healthy,” the user wrote.

“This is not ok to take picture of people and post them,” another person wrote on a Nextdoor group in Los Angeles, after a user posted photographs of people they felt were walking too closely together. “What is next? Train to Dachau?”

Privacy expert Laidlaw said public shaming on social media started way before the pandemic, noting that “shaming sites are not new, nor are neighborhood watch/surveillance sites.”

What’s even more concerning is when the government starts asking people to snoop for them: NYC Mayor Bill de Blasio told residents on Friday that people should take photos of those who are not wearing masks and report them to authorities.

(And Mayor Garcetti said that “snitches get rewards” in the post-corona world – Ed.)

When the dust settles, which could be sometime in 2Q21, as per a new report via Morgan Stanley, it will become increasingly evident that a surveillance state in America has been erected, from the community level of people snitching on others on social media, all the way up to mega-corporations and government.

Subscription is FREE and CONFIDENTIAL
Free Report: How To Survive The Job Automation Apocalypse with subscription
Share432
Tweet
Pin1

Be the first to comment on "“What’s Next… A Train To Dachau?” – Snitching On Social-Distance-Deniers Sparks Outrage Across America"