In the last week 4.427 million Americans filed for unemployment benefits for the first time. 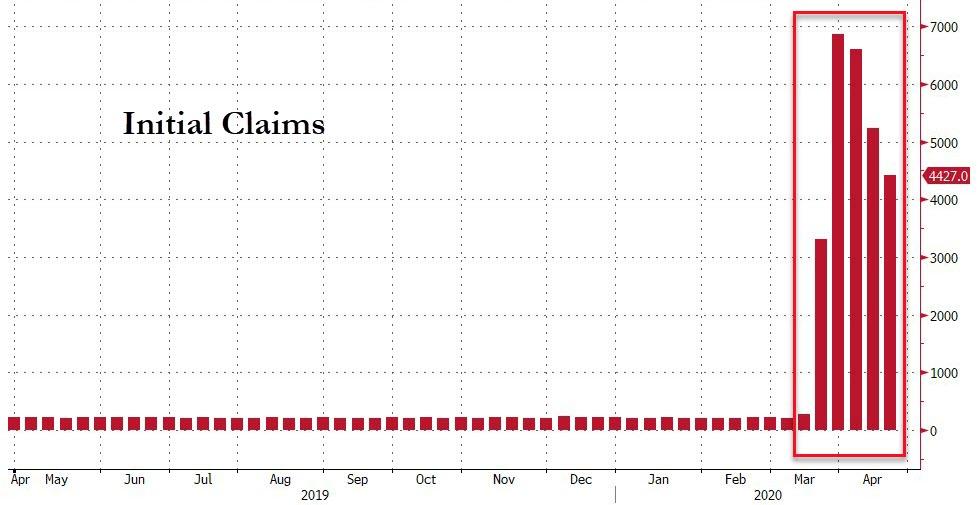 That brings the four-week total to 26.5 million, which is over 10 times the prior worst five-week period in the last 50-plus years.

And of course, last week’s “initial” claims and this week’s “continuing” claims… the highest level of continuing claims ever 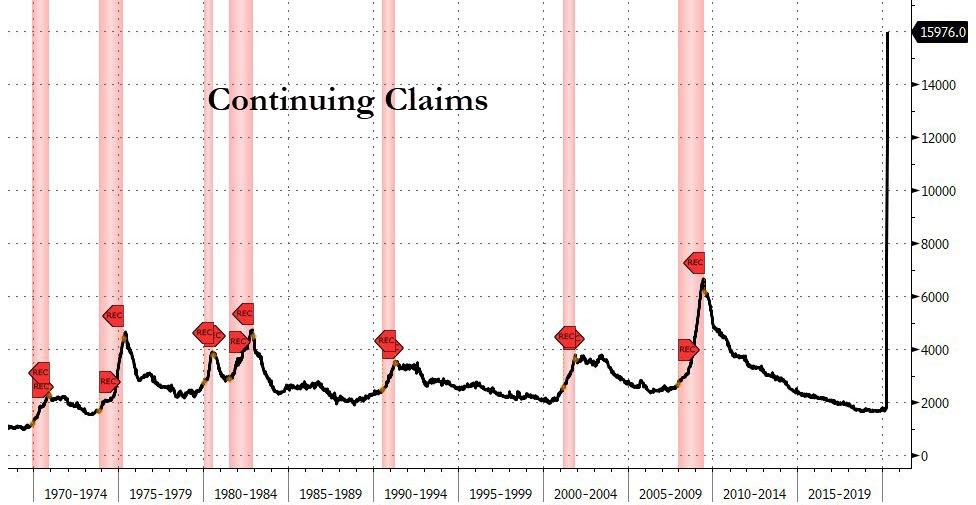 A breakdown of initial claims by state shows that the weekly devastation is easing, with the number of (not seasonally adjusted) claims in New York, California and Michigan declining notably over the past week, while Florida and Connecticut still showing dramatic increases.

And as we noted previously, what is most disturbing is that in the last five weeks, far more Americans have filed for unemployment than jobs gained during the last decade since the end of the Great Recession… (22.13 million gained in a decade, 26.46 million lost in 5 weeks)

Worse still, the final numbers will likely be worsened due to the bailout itself: as a reminder, the Coronavirus Aid, Relief, and Economic Security (CARES) Act, passed on March 27, could contribute to new records being reached in coming weeks as it increases eligibility for jobless claims to self-employed and gig workers, extends the maximum number of weeks that one can receive benefits, and provides an additional $600 per week until July 31. A recent WSJ article noted that this has created incentives for some businesses to temporarily furlough their employees, knowing that they will be covered financially as the economy is shutdown. Meanwhile, those making below $50k will generally be made whole and possibly be better off on unemployment benefits.

Furthermore, as families across the nation grapple with lost jobs and struggle to get meals on the table, The Epoch Times’ Zachary Stieber reports that food stamp benefits are up 40%, according to the Department of Agriculture.

The increase will “ensure that low-income individuals have enough food to feed themselves and their families during this national emergency,” Secretary of Agriculture Sonny Perdue said in a statement.

Families receiving food stamps can typically get a maximum benefit of $768. Through the increase in emergency benefits, the average five-person household can get an additional $240 monthly for buying food. Families already at the maximum won’t get additional benefits. SNAP normally costs the U.S. government approximately $4.5 billion each month. The allotments made under the Families First Coronavirus Response Act, which President Donald Trump signed, is adding nearly $2 billion per month to that total. The emergency funds are made available through waivers the Department of Agriculture makes for each state.

But, hey, there’s good news… well optimistic headlines as Treasury Secretary Steven Mnuchin said he anticipates most of the economy will restart by the end of August.