Since the Federal Reserve detached the dollar from the gold standard in 1971, the world’s central bankers – with the Fed leading the charge, have flooded the world with fiat currency to the point of diminishing its purchasing power to shadow status.

A common belief during the early decades of the former Soviet Union’s rise after 1917 was that, according to Marxist-Leninist theory, the West and capitalism would either self-destruct, or be “buried” by the superior economic platform being constructed for the proletariat by the USSR, and later Communist China.

But even the Great Depression, which in the West lasted from the Crash of 1929, and arguably into WWII, failed to do the trick.

Much later, in a case of great historical irony, the West received a Christmas present of sorts, when on December 26, 1991 the Supreme Soviet voted itself and the USSR out of existence!

However, to say that the world is moving into uncharted waters as we head into 2020 could turn out to be a monumental understatement!

On the surface, the U.S. still enjoys – so far – a 10-year stock market bull run, record low employment, and fairly stable consumer prices. But under the hood, we’re piling up massive long-term debts which have little chance of being paid back at anything near today’s purchasing power.

Pouring more paper and electronic bytes into the system in order to stimulate growth is having the opposite effect. Consider the €15 trillion in Eurozone-issued paper, now literally paying less than nothing and accomplishing about as much.

Fiat currency simply floats to the top of the heap where it fuels market bubbles, stock buybacks, bigger management bonuses, and investments in billion-dollar (non)startups like WeWork.

The middle class once looked forward to “clipping” bond coupons during their “golden” years but are now being greeted with what the Bank of England calls “the lowest interest rates in 5,000 years.” 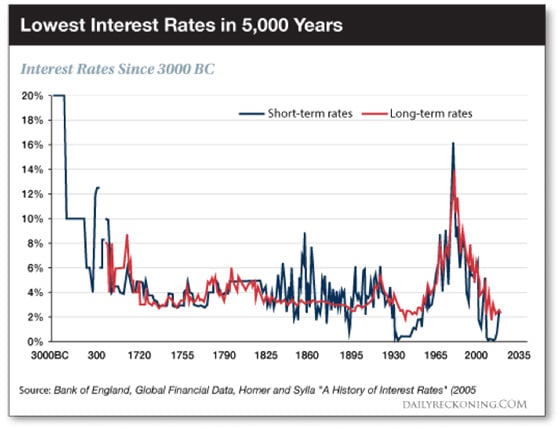 Meanwhile, Russia has become the world’s third largest gold producer (after China and Australia) and continues to import even more, with central banks doing the same!

Slowly the “powers that be” are starting to come clean about their (private) love – (public) hate relationship with gold, hinting that it just might have some redeeming features. The Dutch National Bank recently said:

Gold is… the trust anchor for the financial system. If the whole system collapses, the gold stock provides a collateral to start over. Gold gives confidence in the power of the central bank’s balance sheet.

So there you have it!

Our financial crystal ball is still a bit cloudy right now, but it’s not a stretch to consider that the global financial tectonic plates are under considerable stress as multi-causal socio-political factors conspire to grind them ever more tightly.

Keeping in mind that the pronouncements of news outlets on the mainland tend to closely align with the views of Bejing’s rulers, and that the Party speaks of important matters obliquely, the Global Financial Times, China recently had this to say:

So the gold standard is an effort by the world market and financial system to balance the “Trumpian future.” It means that the US can take its own path and Americans will have the right to look after themselves, but other countries around the world will also have the right to make their own choices.

In other words this will be a process of rebalancing in the world financial market, forcing the US to face up to problems. It needs to make a choice: fulfill the obligations and responsibilities for international finance, or abandon the international status of the dollar, thus allowing the dollar to become a common currency…

For the US, the gold standard is a choice that cannot be avoided. The existence of the choice matters a lot. Central banks would increase their holdings of gold reserves to prepare for the return of the gold standard. Gold prices will rise. Besides that, the most important thing is whether the US is willing to accept any big change or wants to return to the old financial order…

In short, it’s an odds-on bet that over the next few years, profound structural changes are in store for the world financial system.

As China, Russia and other key players attempt to “re-rate” the US dollar from Reserve Currency, top-dog status to “a common currency,” we should pay attention and adjust our personal financial profiles accordingly. 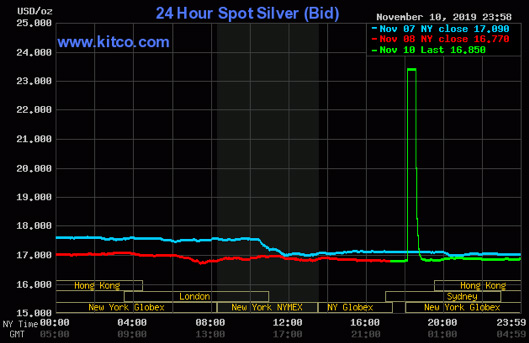 On Veterans Day, in thin market conditions, an intra-day silver spike turned out to be a false signal. But what if it had been for real and on the open for the next trading day, the price had held, or even moved up to $25? And you had no silver? What now, sport?

One of these days, a surprise move like this for both gold and silver could be for real.

We don’t need to predict exactly when in order to protect ourselves and make sure we’re “involved” by having some metal insurance. Why allow ourselves to be relegated to the status of long-term spectators – minus the binoculars?

Once gold gets a few closes above its intermediate high around $1,575, perhaps before year end or soon thereafter, it will be motivated to run toward the next “resistance” level around $1,700 – as a start.

So don’t wait to act until the obvious is well under way. Get yourself positioned to play the long game and the Big Move.

As Nick Barisheff succinctly puts it, “The small minority of wealth preservationists will sleep well with their physical gold and silver, whilst the majority of the asset management industry are likely to have nightmares for many years.”

Act soon to acquire enough physical gold and silver so you can sleep well, counting your Maple Leafs and Silver Eagles, while others are counting sheep… or sitting up in bed with a bad case of FOMO – the Fear Of Missing Out.