In El Salvador, President Nayib Bukele is popular. The Twitter-savvy entrepreneur arrived at the presidency on June 1, 2019, without a clear ideological line at the heels of decades of disappointment in governments from the left and the right. Years of high-level corruption, gang violence, lack of jobs and forced migration made the population believe that Nayib Bukele could be the captain to steer El Salvador in the right direction.

Between January and May 2019, the homicide rate decreased from 8.9 for every 100,000 inhabitants to 5.6 between June and August according to national data, which Bukele credits to his militarized security plan. A little more than 50 percent of the population see the fight against crime as Bukele’s best achievement, while 90 percent have noticed some positive change since he took office.

The day he announced the launch of an international anti-corruption scheme, another popular initiative, he refused to let investigative journalists into the press conference. A public spat then ensued between Bukele and the censored journalists.

Bukele tweeted that journalists from El Faro and Revista Factum were “crybabies” (he used the word “vístimas” an ironic alternative for víctima, in Spanish) and explained they were not allowed to enter because they behaved badly in a previous press conference. El Faro journalist responded that in a previous occasion, he had his microphone turned off and so had to shout his question.

El Faro and Revista Factum have helped uncover massive corruption and impunity schemes in the past and are investigating the current president’s past financial links and the government’s transparency. They also investigate criminal structures within the country, helping readers understand the highs and lows of gang violence in El Salvador.

For many of Bukele’s followers, these digital media are accused of being biased against the president. One of the founders of Revista Factum is affiliated to a nascent right-wing party, for example. In general, the media in El Salvador is seen as sold out to private and political interests.

International organizations like the Inter-American Commission on Human Rights and the Committee to Protect Journalists condemned the ban, however. Bukele has since allowed the journalists to press conferences, but has called one of Revista Factum’s journalists’ questions on transparency “stupid,” as shown in this video. The video went viral with people supporting the president’s behavior.

“100 days are a very short period of time to judge a government. We can talk about the first symptoms of what looks like a problem of a cult of personality, a narcissism problem, and an intolerance to critical voices. Hopefully this will change.”

El Salvador has been considered one of the relatively better countries in Central America to be a journalist, but it is losing its position—it regressed by 15 spots in the 2019 World Press Freedom Index since 2018.

Although Bukele’s conflictual relationship with the press is not new—he was involved in coordinating a “troll center” from his cellphone against La Prensa Gráfica and El Diario de Hoy in 2015—it escalated in recent weeks.

Bukele’s supporters are following his lead and decredibilizing, or, in the worst cases, insulting journalists and anyone giving a hint of skepticism of Bukele’s governance. The president uses a narrative that divides those who are in favor of him—the “90 percent who support him in polls”, and the 4 percent who “do not.” Bukele claimed that the “4 percent are disgusting” because they criticize armed forces.

Public shaming may dissuade others to speak their mind in the country. Karla Castillo, a Salvadoran human rights activist, had questioned Bukele’s penchant for the growing militarization of El Salvador on Facebook and the post went viral. Thousands of people criticized her opinion and her person by insulting and threatening her.

The President’s Office of the Secretary of the Press has just shared a series of images on Twitter as part of it’s Independence Day celebration. A show of repression by the Armed Forces, in front of the president’s dais. I don’t know about you, but I feel sad and afraid when seeing these images. President Nayib Bukele could have chosen to make a difference by celebrating independence with so many cultural, artistic and even educational activities. But he prefers to make a demonstration of terror. Even more incomprehensible is to see them enjoying the show. No, this is not independence, this is to create fear among the population.

And for those who defend this practice, I remind you of the report that was made public by the Attorney General’s Office a few weeks ago, which demonstrated that the authorities themselves abused their own power to commit violent acts. The report counted at least 116 victims.

It is one thing to use the government’s forces within the framework of their duties, it is quite another to use them to put on a show for entertainment purposes. This institutionalizes terror as a practice and to legitimize the use, and even the enjoyment, of repression. 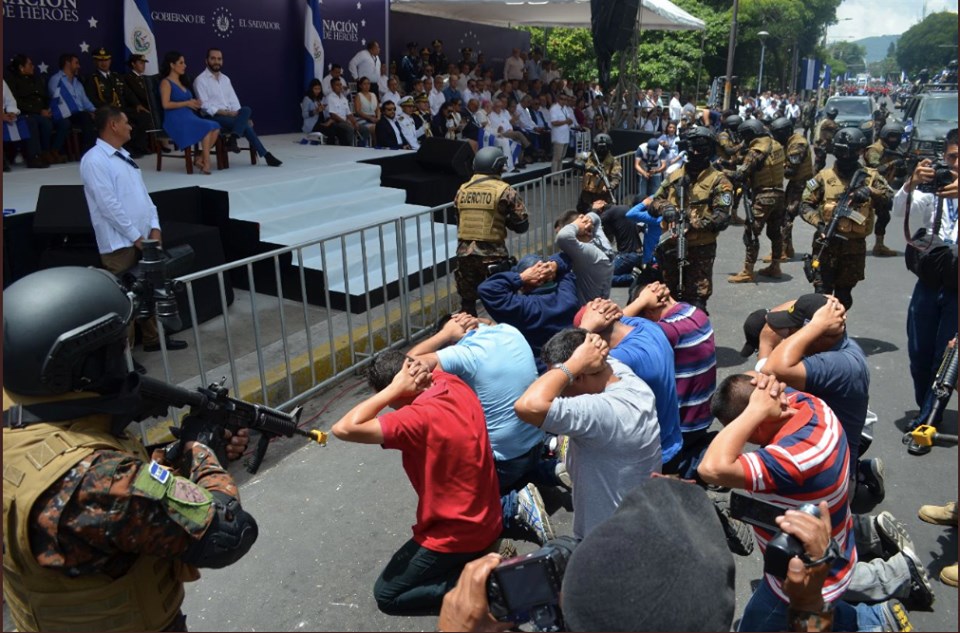 “People get offended because Bukele is their only hope,” Karla Castillo told Global Voices by phone. “So any criticism against the president is criticism towards them and their hope.” What worries her is that the president is “prompting others to follow his lead.”

Although she believes that the president has good intentions to fix the country, she says that he may “have strategies on how to manipulate public opinion.” She believes that one of these strategies is to make the press the enemy and avoid uncomfortable questions. Another strategy, according to her, would be to create the vision of a country that does not exist yet and discredit contrary opinions.

“Of course I want the country to improve, my friends have lived through horrible stories of murder,” she said. “But I want things to be done in the right and truthful way.” She believes that attacks on freedom of speech is a form of violence in itself.

“People have written to me in private to thank me for being that voice, because they don’t dare criticize the president openly because of online attacks,” she said.

Melissa Vida — I am a freelance journalist based in Mexico City and cover Central America for Global Voices.

Be the first to comment on "While El Salvador’s Security Improves, It Loses Ground in Freedom of Press"