We live not only in a time of fake news but also in the era of fake economic growth. The performance of the economies of the industrialized countries since 2010 is a prominent case of deceptive economic growth. This economic recovery is not the result of a strengthening of the productive forces of the economy, but is due to a massive expansion of liquidity. Central banks created a monetary avalanche that has gone mainly into the financial markets and has become a source of deception for investors. In real terms, the economy has not advanced very much since the financial crisis of 2008. The valuation of financial assets has decoupled from the real economy.

The president’s favorite indicators of prosperity such as the stock market valuation and the official unemployment rate paint a deceiving picture of the true state of the American economy. Alternative calculations of the employment data — which include long-term discouraged workers and chronically unemployed — indicate that the labor market is much slacker than the official statistics indicate.1 Profits recovered in the first few years after the crisis of 2008 but over the past five years, they have been flat. Stock prices, in turn, as measured by the S&P 500 Index, have risen by over 50 percent since 2012.

The recovery after the crisis of 2008 was brought about by the stimulus packages and later on by the monetary policy of “quantitative easing.” The expansion that followed does not constitute genuine economic growth. While the financial asset markets indicate wealth creation, the economy’s productive capacity tends to remain weak. Over the past ten years, the Congressional Budget Office had to lower its estimate of potential output year by year and productivity growth has stayed below the trend of the time before the crisis of 2008.

At the national and the global level, the size of the fabrication of additional central bank money since 2008 has been unprecedented. Led by the Federal Reserve, the other major central banks joined in to increase the global money supply. The balance sheets of the world’s three main central banks rose from four trillion in 2008 to fifteen trillion U.S.-dollars in 2018.

In the United States, the Federal Reserve System expanded its holding of assets from less than one trillion in 2008 to over 4.5 trillion US-dollars in 2015 until the American central bank began a policy of reducing its stock of assets in 2018 to the present level of about 3.8 trillion US-dollars (Figure 1). 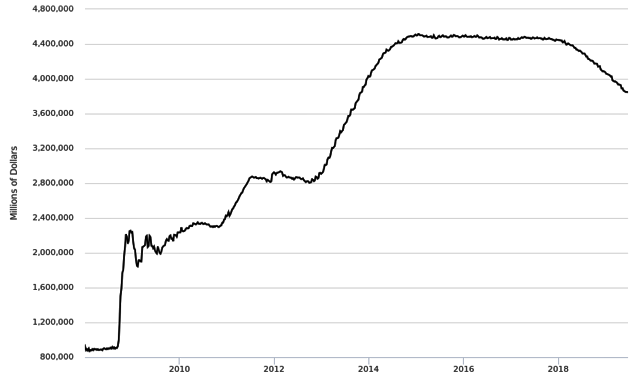 The point to notice here is not only what has happened but what has not. Firstly, this massive amount of liquidity creation has not led to higher price inflation and secondly, compared to this immense increase of liquidity, the expansion of the real economy has been mediocre. Both facts are interrelated. Despite an unprecedented increase in liquidity, the real economic expansion has been poor, and the price level has remained relatively stable. Both, the average real growth rate of the US economy, and the mean annual inflation rate have been less than 2 percent over the past ten years. For the euro area, the data are not very much different, and for Japan, these indicators are even worse.

The recent surge in the American economic growth rate to 3.2 percent in the first quarter of 2019 is as fake as the economic growth before when it was the result of monetary expansion. Now when the American central bank tries to shorten its balance sheet via monetary policy, fiscal policy has become expansionist with the Trump tax cuts. The fiscal stimulus has replaced the monetary stimulus. At the beginning of the year 2019, US federal debt reached over 22 trillion US-dollars and the ratio of public debt to gross domestic product surpassed the level of 105 percent since 2016 (Figure 2).

Whereas one does not know how the economy would have done in the absence of the expansionary monetary and fiscal policies, we do know that relative to the magnitude of the monetary and fiscal stimuli, the impact of the expansionary policies on economic growth and the price inflation has been modest. Now, in the mid of 2019, while the economy has not yet fully recovered, there is still a balance sheet problem and rising public debt, both of which will become severe problems when the economy heads into the next recession.

The economic policies that the authorities implemented in response to the crisis of 2008 have not been very effective. They have brought more problems instead of a solution. By pushing the interest rate down to zero, and partially into negative territory, by flooding the financial markets with liquidity, central bankers have elevated the valuation of bonds and stocks and real estate to levels that far exceed the growth of the economy and consequently the rise of salaries. This has made the monetary policymakers the prime culprits of the massive wealth disparity that has emerged over the past ten years. They have been the perpetrators behind the shift of popular sentiment that has made capitalism dubious and socialism popular.

Things will get worse when the next recession strikes. The Federal Reserve System and the other important central banks have produced an economy of Zombie companies. In an environment of extremely low interest rates, a plethora of business projects emerge that create economic activity and raise employment but will not be able to withstand higher interest rates. In the meantime, these Zombie firms suck the blood out of the healthy part of the economy. Because a return to normalcy would reveal that a large part of the economy is on artificial life support and that the recovery has been fake, the central bankers have opted for lower interest rates and governments for more deficits. Central banks and governments buy a short-lived extension of the economic expansion at the price of a bigger bust to come. These policies instigate malinvestment and deepen the misallocation.

Policymakers ignore the main lesson of the crisis of 2008 that monetary and fiscal stimulus policies do not bring about a solid recovery but manufacture a phony economic growth that distorts the economy’s structure of production. Instead of a V-shaped recovery that would occur if government abstained from intervention, policymakers produce an L-shaped agony.

As if a prolonged stagnation wasn’t already bad enough, the interventionists also act as the undertakers of capitalism. Policy intervention distorts the economy and drives a wedge between Wall Street and Main Street. The majority of the people do not attribute the discrepancy between the growth of financial wealth and the stagnation of the real economy to the policy of the authorities — but accuses capitalism of this evil.

It is hard to find a greater paradox in current politics than that the battle cry for social justice demands more government spending and a monetary policy which ignores debt and deficits. It was exactly this kind of policy that has caused the present widespread discontent.

Dr. Antony P. Mueller is a German professor of economics who currently teaches in Brazil. Write an e-mail. See his Amazon author page.

Subscription is FREE and CONFIDENTIAL
Free Report: How To Survive The Job Automation Apocalypse with subscription
Share61
Tweet
Pin2