Aided by lax legal restrictions, Pakistan is a “high-risk country” in terms of media pluralism as more than half of mass media ownership is concentrated in the hands of a few — a model which has resulted in closure of businesses, a fall in journalism standards and rise in censorship, says a new research study.

These findings, coupled with the ruling party’s increasingly hostile attitude towards journalists who are critical of government institutions, have led to the deterioration of the country’s once-vibrant media environment and paved the way for continued threats to press freedom.

The report found that the top four television channels, radio stations, newspapers and news websites had over 50 percent of the country’s entire audience share.

In addition, unbridled “cross-media ownership concentration“, which measures concentration across media sectors, has allowed more than 68 percent of market control to stay in the hands of eight media organizations. These organizations (Jang, Express, Dunya, Nawa-i-Waqat, Samaa, Dawn, Dunya, ARY) — and the government — have a significant presence in more than one media sector. 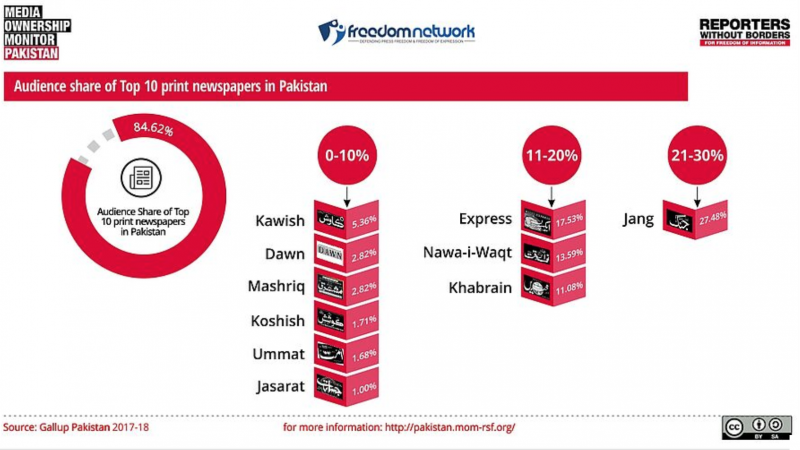 According to the report, the current legal framework does not prevent cross-media ownership and the country’s regulatory bodies are accused of failing to ensure a “level playing field” and “fair competition” in the market.

The Pakistan Electronic Media Regulatory Authority (PEMRA), which is responsible for regulating radio, television, and distribution services of electronic media in the country, is often accused of being more of a media content regulator than a media industry regulator. According to the report:

…instead of regulating the industry, the regulators have traditionally concentrated on content monitoring and censoring media on the behest of state institutions and governments”.

In addition, PEMRA only has regulatory control over private-sector media and its ordinance excludes existing and future operations of any government-controlled media. This infrastructure has helped to create an environment where the government has the power to exercise control over the media without many checks.

According to the report, the state influences the functioning of the media market by “discrimination” in the distribution of state advertisements. The state has long remained one of the most important sources of funding for the country’s private broadcast and print media. It generally distributes advertisement on the basis of audience share; however, violations have often been reported with ad volumes being reduced for certain media houses “as a tool of punishment”.

The Pakistan Tehreek-e-Insaf (PTI) government has shown “hostility in its dealings with all media” and slashed its ad spending, forcing the media to lay off nearly 2,000 staffers; some newspapers and TV channels were also shut down.

According to a  report on Global Investigative Journalism Network (GIJN), the government has revoked advertising for Dawn newspaper, as well as for its TV channel, DawnNews. The independent Dawn Media Group is facing immense pressure due to its editorials and reports that are critical of the government.

This business model — where ownership is concentrated in the hands of a sole investor or a single family — has not only led to the closure of business and fall in the quality of journalism, but it has also given rise to censorship. The Dawn news outlet commented on the media crisis in Pakistan:

Failing financials have forced the media owners and managements to cave into rising pressure from the state machinery, including not just the political government but also the security establishment, both of which are losing their appetites for criticism of their policies by a freewheeling media.

Recently, government authorities have been accused of more actively stifling opposition voices — from disrupting the transmission and distribution of news channels and independent newspapers, to an unofficial ban on reporting on so-called “sensitive” subjects like the Pashtun Tahaffuz Movement. Interviews with top leaders like former president Asif Zardari and Pakistan Muslim League (PML-N) vice president Maryam Nawaz have been pulled off air, and networks are being penalized for giving them “unedited” coverage.

The same day Prime Minister Imran Khan, who is on a visit to the United States, addressed the Pakistani community at the Capital One Arena in Washington, the PML-N opposition leader was holding a rally in Faisalabad, Punjab. The opposition event, which was also attended by thousands of party supporters, was not given the same coverage.

#Pakistan media covered #PMIKJalsaInUSA from thousands miles afar but ignored #MaryamNawazInFaisalabad at home! Her coverage has disappeared from airways just like #PTM’s. Welcome to Naya Pakistan where there opposition doesn’t have the right to speak! https://t.co/YyHoAdMMY0

Senior journalists Umar Cheema and Azaz Syed were recently “forced” to deactivate their Twitter accounts for three days as their “hard-hitting tweets did not go down well with the authorities”.

Geo News, which has been repeatedly blocked from broadcasting in recent years, was forced off the air or, in many parts of the country, had its channel number suddenly changed:

In the middle of their coverage of the provincial elections in the former Fata, Geo News has suddenly disappeared from my cable and has been replaced by Such TV. Anyone else experiencing the same black-out?

Earlier this month, privately owned news channels Capital TV, 24 News, and Abtak News were also blocked. This move came a day after they aired Maryam’s Nawaz’s press conference, in which she leveled accusations that an accountability judge was blackmailed by the military establishment into sentencing her incarcerated father and former prime minister Nawaz Sharif.

So far, Prime Minister Khan has dismissed the ongoing censorship accusations as a “joke”.

Waleed Tariq is a multimedia journalist based in Karachi, Pakistan.

This article was sourced from GlobalVoices.org.

Top image: A spectrum of the findings of the collaborative research study, the Media Ownership Monitor (MOM) Pakistan. Screenshot from the MOM Website.