Convenience is the sales pitch, but the real goal is control in service of maximizing profits and extending state power.

When every device in your life is connected to the Internet (the Internet of Things), your refrigerator will schedule an oil change for your car–or something like that–and it will be amazingly wunnerful. You’ll be able to lower the temperature of your home office while you’re stuck in a traffic jam, while your fridge orders another jar of pickles delivered to your door.

It’s also about control, and as we lose control of everything that’s actually important in our lives, the illusion of agency/control is a compelling pitch. Imagine being able to program your fridge to order a quart of milk delivered when it gets low but not order another jar of pickles when that gets low! Wow! That’s control, yowzah.

The Internet of Things is indeed about control–not your control, but control over you— control of what’s marketed to you, and control of your behaviors via control of the incentives, distractions and micro-decisions that shape behavior.

I Used Google Ads for Social Engineering. It Worked. (via Mark J.)

The control enabled by the Internet of Things starts with persuasion and quickly slides into coercion. Since corporations and government agencies will have a complete map of your movements, purchases, consumption, communications, etc., then behavior flagged as “non-beneficial” will be flagged for “nudging nags”, while “unsanctioned” behavior will be directed to the proper authorities.

Say you’re visiting a fast-food outlet for the fourth time in a week. Your health insurance corporation has set three visits a week as a maximum, lest your poor lifestyle choices start costing them money for treatments, so you get a friendly “reminder” to lay off the fast food or make “healthier” choices off the fast food menu.

Failure to heed the “nudges” will result in higher premiums or cancelled coverage. Sorry, pal, it’s just business. Your “freedom” doesn’t extend to costing us money.

Then there’s the surveillance. The Internet of Things isn’t just monitoring energy use and the quantity of milk in a fridge; it’s monitoring you–not just in your house, car and wherever you take your Personal Surveillance Device, i.e. your smartphone, but everywhere you go.

If you are a lookie-loo shopper–you browse the inventory but rarely buy anything–expect to be put in Category Three–zero customer service, and heightened surveillance in case your intent is to boost some goodies (shoplift).

Heaven help you if you start spending time reading shadow-banned websites like Of Two Minds: your social credit standing moves into the red zone, and your biometric scans at airports, concerts, retail centers, etc., will attract higher scrutiny. You just can’t be too sure about people who stray off the reservation of “approved” corporate media.

Your impulses are easy to exploit: since every purchase is tracked, your vulnerabilities to impulse buys will be visible with a bit of routine Big Data analysis, and so the price of the treats you succumb to will go up compared to the indifferent consumer next to you. Sorry, pal, it’s just business. Your vulnerabilities, insecurities and weaknesses are profit centers. We’d be foolish not to exploit them to maximize profits, because that is the sole mission of global corporations.

Governments access the trove of surveillance for their own purposes. Monitoring phone calls, texts and emails is only the first step; privacy as a concept and a right has effectively ceased to exist other than as a legal abstraction and useful fiction. The Dawn Of Robot Surveillance: AI, Video Analytics, and Privacy.

Longtime correspondent Simon H. recently submitted a video link on The Internet of Things as well as a sobering and insightful commentary.

Here is an overview by James Corbett of the totalitarian reach of the 5G IoT and a technocratic surveillance dictatorship. All delivered as an unavoidable facet of inevitable tech progress.

There seems to be an idea that the only reason we have historically had privacy, civil liberties and general freedoms is because in the past we lacked the technology to eliminate them.

The future does indeed seem to have globalist technocracy written all over it which is to be presented as a simple matter of embracing technological progress and celebrating new technological wonders. Don’t think about the total surveillance taking place just marvel at the speed of your connections and the convenience of outsourcing all of your troubling personal sovereignty to machine assistants to make all of your decisions for you.

Anyone who resists this undemocratic future will be branded as a nostalgically foolish, technological Luddite. However, this new form of tech is completely different in nature to all of those that have preceded it. If we think in terms of macro and micro economics, then we can also look at current developments in terms of macro and micro sovereignties. This phenomenon is more pronounced in the UK than the US because of the sovereignty issues of the EU and Brexit.

Not only is our democratic sovereignty being eroded by supranational organization such as the EU, the IMF, the IPCC, markets and the central banking masters of the economic universe, etc., if we take surveillance capitalism, 5G and the Internet of Things (IoT) into consideration one can see that our sovereignty it is also under direct dual attack at an extreme and fundamentally personal level.

Against all of these things we are seeing extraordinary coalitions of resistance: Marxists, Anti-Capitalists, Anarchists, Austrian Libertarians and anyone of an old school left of right wing true liberalism who believe in the principles of democracy and sovereignty, freedom of speech, privacy and civil liberties.

The so called liberal progressives who support globalism and the technocracy are anything but liberal: they are imperialist totalitarians no better or less dangerous than the Nazis. We desperately need to strip them of their fake liberal and moderate claims and show them for what they truly are — sociopaths.

Thank you, Simon. Resistance can take many forms.

One approach is to minimize surveillance by stripping out apps from your smartphone, leaving it in a drawer most of the time, and disabling WiFi in all appliances and devices you buy/own. This approach isn’t perfect, as surveillance is far beyond our control, despite Big Tech claims of transparency, privacy controls, etc., but nonetheless any reduction in data collection is meaningful.

More than 1,000 Android apps harvest data even after you deny permissions (via Mark J.)

Buy with cash and buy the absolute minimum. If you only buy real food–meats, vegetables, grains, fruit, etc.–you’ve effectively stripped out all the profit potential of our corporate overlords. Who is going to make a big profit offering you a discount on raw carrots? No one.

Limit your Personal Surveillance Device, i.e. your smartphone: disable its “always listening” and other capabilities; leave it in the drawer, etc.

Understand you’re being played and gamed 24/7; ignore all the marketing, pitches and propaganda. Make it a habit to ignore all marketing pitches, discounts, coupons, etc. Become an anti-consumer, minimizing trackable purchases and pursuing a DeGrowth lifestyle of repairing existing items and making everything you own last rather than replace it with a new item (this is the Landfill Economy I’ve discussed many times, with thanks to correspondent Bart D. who coined the phrase to the best of my knowledge).

Don’t buy WiFi-enabled devices, and disable WiFi if there are no non-WiFi options available.

This subverts the value of the data Facebook, Google, et al. collect on you and sell to the highest bidder. If the data isn’t useful in selling you something, then the buyers of the data will at a minimum weed the non-controllable consumers out of the data pool.

Since any deviance outside “normal” attracts scrutiny, game the system by logging a baseline of “normal” purchases and activities. Appearing minimally ordinary has its advantages. Trying too hard to leave no digital footprint is itself highly suspicious.

Advocate for digital privacy / Freedom from Surveillance and AI Bill of Rights. There is still a narrow window in the U.S. for protecting and expanding civil liberties and privacy. Here is an example of a proposed Algorithmic Bill of Rights: 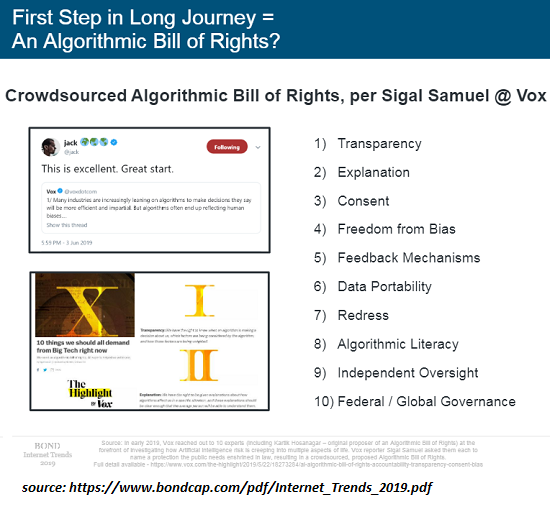 Convenience is the sales pitch, but the real goal is control in service of maximizing profits and extending state power. “To serve humans” takes on new meanings in Big Tech/ Big Government’s Orwellian the Internet of Things: To Serve Man (The Twilight Zone).

You can read more at Charles Hugh Smith’s blog Of Two Minds, where this article first appeared.

Be the first to comment on "“Alexa, How Do We Subvert Big Tech’s Orwellian Internet-of-Things Surveillance?”"