By Manuel and Adam Long

Police violence is a regular Saturday occurrence. The guys who get hurt and injured aren’t hooligans, but protesters.

These are the words of David Dufresne, an independent journalist who is angry about the excessive use of force by French police since the start of the yellow vests (gilets jaunes) movement. Dufresne has kept a tally of the injured victims of police violence and he describes his motivation:

I got involved, right at the start of December, when I saw these horrendous images of the maimed circulating on social media. And I mean maimed: I’ve counted 23 people who’ve lost an eye, five who’ve lost a hand.

To call out the violence, David Dufresne set up a website, in partnership with Mediapart, an independent newspaper. Ironically named “Hello Home Office, Justice Department” (referencing a Twitter expression to flag illegal or offensive content to the police), his platform itemizes casualties since the beginning of the yellow vest movement.

The site details injuries reported by category. Of the 550 reports cataloged, more than 222 concern head injuries, with at least 20 with cases of eye loss and five reported arm loss. Of the victims, 419 were demonstrators, 57 journalists, 37 minors, 19 bystanders and 18 medical personnel. On Twitter, Dufresne shares photos of injuries sent by the victims.  At times extreme, images show grave injuries sustained at the hands of law enforcement officers during protests.

Police violence: We now have at least 260 reports from @davduf. @CheckNewsfr calculates 93 seriously injured, 13 of whom have lost an eye. A Gilet Jaune is reportedly in a coma. Many journalists have also been wounded. One thing remains constant: the government’s silence. pic.twitter.com/D7ZNHoAURZ
— David Perrotin (@davidperrotin) 14 January 2019

The violence and repression raise questions. Why are so many protesters losing an eye or a hand in these demonstrations?

French law enforcement has been using a particular weapon referred to as ‘less-lethal rubber bullet gun‘ (lanceur de balle de défense, or LBD, in French). Made in Switzerland, originally designed to prevent killing or seriously wounding a target, this projectile launcher is controversial. Detractors say this weapon is entirely unsafe.

Between 2004 and 2013, serious injuries of around 30 people were attributed to LBDs — the same number since the start of the yellow vests movement in November 2018 to present.

In January, medical practitioners launched a petition to ban the use of LBDs. Laurent Thines, neurosurgeon and chief clinician at Besançon teaching hospital said:

A projectile of the LBD40 type, for example, launched at over 90 meters/second (324 kilometers per hour) has an impact force of 200 joules [rate of energy aborption]: that’s like having a 20 kilograms of concrete block thrown on to your face or head from one meter’s height!

In principle, LBD should only be used in the area of the “torso, upper or lower limbs,” according to Eric Morvan, director general of the national police.

Amputation of a limb, disfigurement for life, facial or dental trauma, ocular laceration or loss, skull fracture, brain haemorrhage, leading to doubtful survival prognosis, and leading to neurological damage — all these mutilations recalling the destroyed faces of First World War shelling victims…  So many lives have been sacrificed this way…

French police have also used sting-ball grenades to enforce the order. Loaded with explosive trinitrotoluene (TNT), their detonation propels metallic fragments with a blast effect that can wound and deafen.

France is one of the last countries in Europe to employ LBD, along with Poland, Hungary, Turkey and Greece. 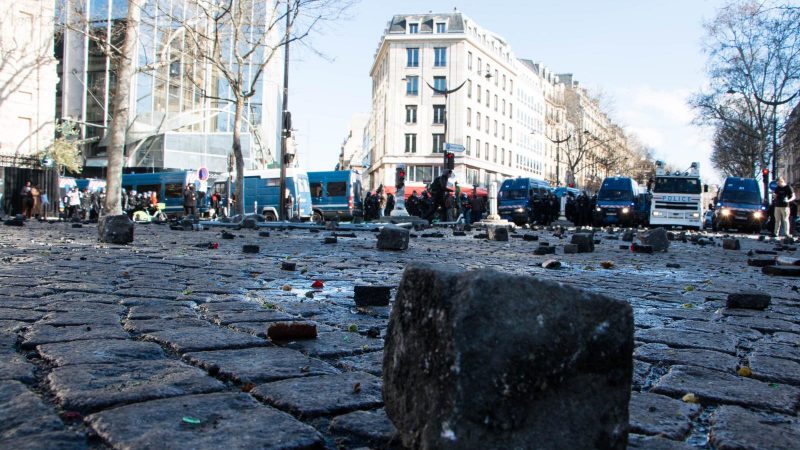 The scene after a yellow vest protest that turned violent. Photo taken on March 18, 2019, in Paris, France. Photo by the author, used with permission.

A protest movement that won’t go away

Yellow vest protests kicked off in France as a reaction to fuel tax increases but rapidly transformed into weekly protests. Every Saturday, protesters take to the streets to campaign for new tax policies, greater purchasing power, a citizen’s referendum, and the resignation of President Emmanuel Macron.

Since November, the demonstrations have led to numerous instances of damage to property in several towns. Ten people have lost their lives “indirectly” in road accidents connected to the demonstrations. In Marseille, a woman died after being hit by an exploding grenade.

Although the Ministry of the Interior acknowledges 2,200 injured, including ten with “irreparable eye damage,” the government presses on with its strategy of maintaining order. Questioned by journalists during a visit in January 2019 to Aude, in southwest France, over the police violence, Minister of the Interior Christophe Castaner asserted that “no officer or constable” had “attacked any Gilets Jaunes.”

In February, Castaner returned to the argument, justifying the use of force, saying that hooligans have regularly infiltrated the demonstrators’ ranks. The law enforcers’ aggressive response, according to the minister, were reactions to this violence:

If there were no shops being looted, barricades being put up.
If there were no cars being set alight, public buildings being sacked.
If there were no law enforcement officers being mobbed.
In other words, if the law was being respected, no one would be getting hurt. pic.twitter.com/C3wQQq2fVv

Alexis Kraland, an independent journalist, instantly responded on Twitter, drawing attention to the injured without any direct connection to the demonstrations.

Lying, state propaganda!  There are so many who have been hurt when nowhere near barricades, burning vehicles, sacked public buildings, banks or apartment blocks, looted shops embattled officers

UN calling for an inquiry

Since November, when the movement began, 243 complaints have been submitted to the General Inspectorate of the National Police Service, whose mission is to ensure police follow correct procedures.

It has a total of 174 active investigations, according to Castaner, the Minister of the Interior. These investigations will establish whether officers have applied “proportionate” force.  “Abuses will be punished,” announced the minister.

Defender of Rights, France’s official human rights ombudsman, Jacques Toubon, expressed concern in his annual report over the “routine use of rubber bullet launchers,” and urged a ban on them as well as explosive grenades.

United Nations’ Michelle Bachelet of the High Commissioner of Human Rights, has also called for an “in-depth inquiry” into incidences of police violence in France.

Do not speak of ‘repression’ or ‘police violence’ — these words are unacceptable in a state under the rule of law.

In the town of Nice, during the yellow vests’ “Act 19,” which stands for 19th consecutive weekend of protest by the Yellow Vests,  a 73-year-old demonstrator sustained a head injury in a fall.

Before the investigation was over, Macron assured the newspaper Nice-Matin that the demonstrator had not been “in contact with the law enforcement agencies.”

Ten days later, this version was disproved by the examining magistrate of Nice, who ruled that an individual police officer had in fact been the cause of the senior citizen’s fall.

Adam Long has a Degree in French and Russian, followed by career in UK local government IT

Be the first to comment on "In France, Police Violence Escalates To Quell Yellow Vests Protests"