On May 10th, 2018, the hacktivist group Anonymous attacked the official website of Russia’s Federal Agency for International Cooperation (Rossotrudnichestvo) by hacking and defacing its subdomain against the ongoing censorship in the country, citing the recent ban on the encrypted messaging app Telegram.

To recap, last month the Telegram app (along with 16 million IP addresses) was blocked in the country after the company declined a court-ordered request to hand over encryption keys of its users to Federal Security Service (FSB) of Russia.

Last month, Roskomnadzor, Russia’s equivalent of the FCC, began telling mobile networks that they had to block access to Telegram.

According to the head of RKN, Aleksandr Zharov, the authority has managed to block 30 percent of Telegram networks, and the amount of complaints from services that have suffered as a result of the ban is “quite low.” RKN has also issued warnings to proxy and VPN service owners about upcoming bans,citing “extremism and calls for mass disturbances.”

Then, recently on May 3rd, 2018, Russia’s media and communication regulatory authority Roskomnadzor blocked over 50 virtual private networks (VPNs), Web Proxies and Anonymizers amid its crackdown against the Telegram messaging service, HackRead reported. 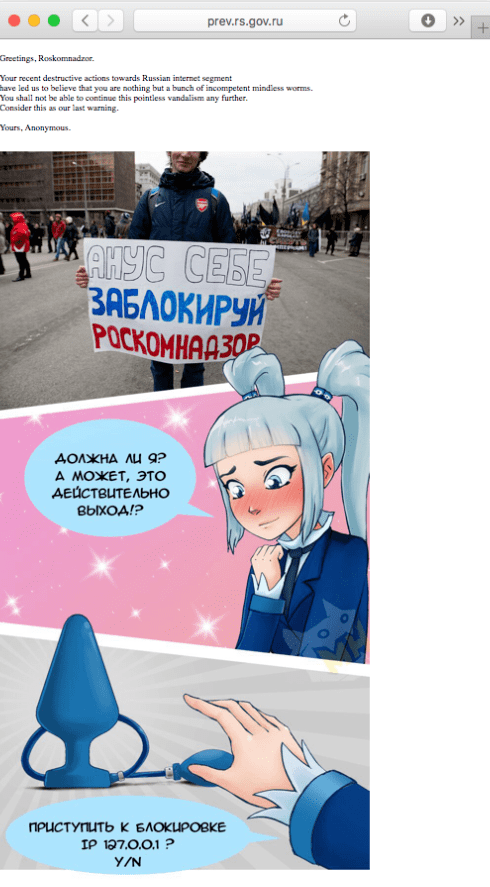 These two moves spurred Anonymous to take action against the Russian government where they threatened that this is Russia’s “last warning.” In an exclusive interview, I talked to one of the Anonymous hackers who said they wished the interview to be Anonymous and didn’t seek any fame or recognition for the hack. The individual said his group did it to bring Anonymous back and didn’t seek credit to their SEC, but rather they wanted to encourage Anons to go back to their roots before SECs became a thing.

“Greetings, Roskomnadzor. Your recent destructive actions against Runet led us to the idea that you are just a handful of incompetent brainless worms. You no longer have to be able to continue this pointless vandalism. Consider this as our last warning. Yours, Anonymous,” the defaced webpage read complete with an anime comic book-style recommending Roskomnadzor “block itself” captioned in Russian.

I sat down to email with one of the Anons who claimed responsibility for the attack for a rare question-and-answer session with Anonymous where I asked them the following questions:

1. Why did you attack Russia what are the motivations behind the attack?

3. Will this be an ongoing Op, can further attacks be expected by Anons?

4. Can we expect old fashion lulzsec/anti-sec database dumps in the near future?

5. Should Russia have expected us?

6. Why are you choosing to keep the attack under Anonymous rather than a SEC group within Anonymous?

7. Do you have a message to Russia?

We hacked the Russian Federal Agency for International Cooperation, to send a message to the Russian Government censorship will not be tolerated.

The Russian Government is destroying what keeps Anonymous alive “Anonymity” this is a threat to Anonymous as a whole and activists in Russia. Under the guise of “terrorism” reminiscent of the United States fear-mongering tactics to promote an agenda/war.

The subdomain of Rossotrudnichestvo (rs.gov.ru) was defaced and we have access to many government databases, Russia is not as strong as you think they are..

I want to make this clear to the public that Anonymous will not tolerate censorship from any government and we will continue to attack the Russian Government if they continue to oppress anonymity..

If they continue yes we will dump massive data leaks, and show no mercy to these fascists!

Yes, Russia you should’ve expected us…. 🙂

This attack was done by Anonymous, to send a message to the Russian government and to the world we are still the final boss.

The message is already sent to Russia, they are not secure and are not safe from Anonymous. End the censorship and telegram ban or you will see more from us, we are legion.

All of us find common ground fighting censorship, all teams we invite you to help attack Russia!

The latest hijacking bears similarities to the breach of a Russian state environmental watchdog’s website on May 1st, The Moscow Times reported.

“That hack was accompanied by the image of a cartoon character wearing a Roskomnadzor arm patch using a flamethrower on the ‘internet,’ as well as a symbol of Telegram founder Pavel Durov’s ‘Digital Resistance’ which he declared against political censorship,” Moscow Times wrote.

Telegram’s founder posted in defiance (translated) to his VK (a Russian social media account) that “Telegram users should continue to try to connect over VPNs.”

“Thank you for your support and loyalty, Russian users of Telegram. Thank you, Apple, Google, Amazon, Microsoft — for not taking part in political censorship,” Pavel Durov expressed.

“We promised our users 100 percent privacy and would rather cease to exist than violate this,” Telegram founder Durov told The Telegraph.

Anonymous has put out a video in support of Durov, calling on other hacktivists to join them in going after Russia and any governments that seek to take away anonymity hindering privacy, liberty, and freedom, noting the “censorship of encryption will not be tolerated anymore.”