The government of Cambodia has exposed and expelled a US network attempting to interfere in the nation’s political processes. The US National Democratic Institute (NDI) was reportedly ordered to end its activities in the country and remove all of its foreign staff.

In a statement, the foreign ministry accused the National Democratic Institute (NDI) of operating in Cambodia without registering, and said its foreign staff had seven days to leave.

Authorities were “geared up to take the same measures” against other foreign NGOs which fail to comply with the law, the ministry added.

The article also noted that:

Prime Minister Hun Sen, who has ruled Cambodia for more than three decades, on Tuesday ordered the English-language The Cambodia Daily newspaper to pay taxes accrued over the past decade or face closure. The paper was founded by an American.

He also lashed out at the United States and non-governmental organizations (NGOs) and accused them of funding groups attempting to overthrow his government.

The American-owned Cambodia Daily newspaper in its own article titled, “NDI Ordered to Halt Operations, Foreign Staff Face Expulsion,” would note that:

The announcement comes less than a week after documents leaked on Facebook and circulated on government-affiliated media appeared to show political cooperation between NDI and the opposition party, amid increased tension in recent weeks between the government and U.S.-backed NGOs and media outlets.

Radio Free Asia and Voice of America have also both been accused of not fulfilling tax and registration obligations. The Cambodia Daily, whose publisher is a U.S. citizen, was hit with a $6.3 million unaudited tax bill and threatened with imminent closure if it is not paid by September 4.

Reuters would cite NDI’s own website in an attempt to inform readers about what its role is in Cambodia claiming, “the NDI works with political parties, governments and civic groups to “establish and strengthen democratic institutions.””


Yet, even a cursory investigation of NDI and the media and political organization in its orbit and the very nature of even its proposed role in Cambodia’s political process indicates impropriety and subversion Reuters is intentionally failing to convey to readers.

What NDI Really is and What it Really Does

NDI is a US government and US-European corporate-funded organization chaired by representatives from America’s business and political community.  Of the 34 listed members of NDI’s board of directors, virtually all of them either have direct ties to US corporations and financial institutions, are members of corporate-funded policy think tanks or previously were employed by the US State Department, or a combination of the three.

Directors with particularly prominent conflicts of interests include:

NDI director Thomas Daschle, for example, actually has foreign political parties as paying clients through is “Daschle Group,” including VMRO DPMNE based in Macedonia as revealed by The Hill. NDI is likewise active in Macedonia, providing support directly to VMRO DPMNE, even co-hosting events in the country according to NDI’s own social media account on Facebook. 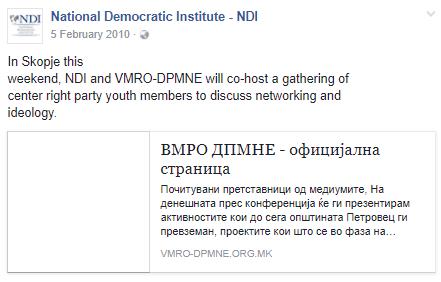 It appears that such conflicts of interests are not the exception, but the rule indicating that NED and its subsidiaries including NDI pursue the collective corporate and financial interests of their boards of directors merely behind the guise of “strengthening democratic institutions.”

An examination of NDI’s corporate sponsors casts further doubts upon its alleged mission statement. Its financial sponsors, according to NDI’s 2005 annual report (PDF), include:

Donors also include convicted financial criminal George Soros’ Open Society Foundation as well as the National Endowment for Democracy (NED) of which NDI is a subsidiary of, as well as the US Agency for International Development (USAID) and the US State Department itself.

Corporations like BP, Chevron, Citigroup, Coca Cola, Exxon, defense contractor Honeywell and IT giant Microsoft are not interested in promoting democracy. They are using democracy promotion as a means behind which to create conditions more conducive to expanding markets and increasing profits. This includes undermining governments impeding foreign corporate control of national resources and markets, or entirely removing and replacing governments with more obedient client regimes.

The contemporary history of American foreign wars and its practice of “regime change” and “nation building” provides self-evident confirmation of the motives and means used to expand US hegemony and clearly illustrates where organizations like NDI fit into the process.

In Cambodia’s case, a much larger, overarching agenda is in play than merely national resources and markets. US activities in Cambodia to coerce or replace the current government in Phnom Penh is done specifically to encircle and contain China through a united front of client states assembled by the United States across Southeast Asia.

Cambodia, along with the rest of Southeast Asia, has begun strengthening ties with Beijing economically, politically and militarily. Large infrastructure programs, weapon acquisitions, joint-training exercises and trade deals are all on the table between Beijing and Phnom Penh.

The US, conversely, has provided few incentives beyond its failed Trans-Pacific Partnership scheme and coercion through networks like NDI and the myriad media and political proxies they fund and operate in Cambodia.

With NDI shuttered, its foreign staff expelled and the organizations and publications it was funding facing similar closures and evictions, it appears what little the US had on the table has been swept away. Cambodia’s particularly bold move may be replicated across Southeast Asia where similar US networks are maintained to manipulate and coerce the political processes of sovereign states.

“Democracy Promotion” From Abroad is a Contradiction

The notion that NDI is “promoting democracy” is at face value an absurdity. Democracy is a means self-determination. Self-determination is not possible if outside interests are attempting to influence the process.

A political party funded and directed by US interests through organizations like NDI, supported by media outfits and fronts posing as nongovernmental organizations likewise funded from abroad preclude any process of self-determination and is thus not only in no shape, form or way “democracy promotion,” it is a process that is fundamentally undemocratic.

In the US where it is widely understood that money dominates campaigns and wins elections, it is difficult to perceive the US pouring money into opposition parties abroad for any other reason besides skewing electoral outcomes in favor of US interests.

Additional irony is provided by the fact that should any other nation attempt to pursue similar programs aimed at America’s domestic political process, those involved would be quickly labelled foreign agents and their activities halted immediately.

The mere allegations that Russia attempted to interfere with America’s domestic political processes resulted in sanctions and even threats of war. Cambodia is a nation that cannot afford nor effectively impose sanctions upon the United States nor wage war against it, but shuttering a flagrant example of foreign interference in its internal political affairs is something Cambodia and its neighbors in Southeast Asia can and are beginning to do.

Cambodia’s use of existing laws regarding taxation and the registration of foreign entities has been effectively used to deal with these organizations. Neighboring nations may begin to require foreign-funded organizations to register as foreign lobbyists, subject them to taxation and more stringent regulations and taking away from them the smoke screen of “democracy promotion” and “rights advocacy” they have cloaked their activities behind for decades.

Joseph Thomas is chief editor of Thailand-based geopolitical journal, The New Atlas and contributor to the online magazine “New Eastern Outlook”., where this article first appeared.