Normalizing the use of stand-off weapons like cruise missiles makes it easier and more likely that similar attacks will unfold in the near future – particularly if Syria and its allies fail to demonstrate a significant deterrence against future attacks.

The use of stand-off weapons by the United States and the routine use of airstrikes by US allies including Israel within Syrian territory will likely open the door to wider and more direct military intervention against the Syrian government.

Punitive strikes will shift incrementally to a concerted effort to dismantle Syria’s fighting capacity, inviting either US proxies to overthrow the Syrian government, or for US forces to do so directly – or likely a combination of both.

Preparing for just such an escalation are not only US forces continuously expanding the scale and scope of their presence in eastern Syria and NATO-member Turkey’s forces in northern Syria, but also a US-led proxy army being staged in and operated from, for years now, in Jordan.

Jordan: The Other “Turkey”

It was from Jordan that a rumored column of US armored vehicles recently entered Syrian territory. CNN, in an article titled, “Coalition and Syrian opposition forces repel ISIS attack,” would report that:

Anti-ISIS coalition troops and allied Syrian opposition forces have repelled an attack by the terrorist group on a joint base in southern Syria, according to the coalition.

The US-led coalition said ISIS initiated a complex attack on Saturday at the At Tanf Garrison on the Syrian-Jordanian border using a vehicle-borne IED, and 20-30 fighters followed with a ground assault and suicide vests.

CNN would also report that:

Some American forces were at the base at the time of the assault, the official said.

Additionally, for years, US policymakers and media platforms have discussed both potential plans for staging an invading force in Jordan, as well as ongoing efforts to stand up a proxy force in Jordan before moving it into Syrian territory.

In 2015, the Guardian in an article titled, “US begins training Syrian rebels in Jordan to become anti-Isis force,” would report:

Jordanian officials told reporters on Thursday that coalition forces have begun training prescreened rebels at a site inside the Middle Eastern kingdom. Training locations are also expected to begin operation in Turkey, Saudi Arabia and Qatar.

A 2016 article by the Washington Post titled, “Revamped U.S. training program, with new goals, has trained fewer than 100 Syrians so far,” would report:

U.S. military officials are considering ways to ramp up training of Syrian fighters against the Islamic State as the Pentagon moves cautiously forward with a revamped program to create an effective local ground force.

The series of setbacks hindering the creation of an “opposition army” from scratch, and even setbacks in training and effectively utilizing existing militant and terrorist groups may be why the US has also sought to create its own large and growing military presence in Jordan. 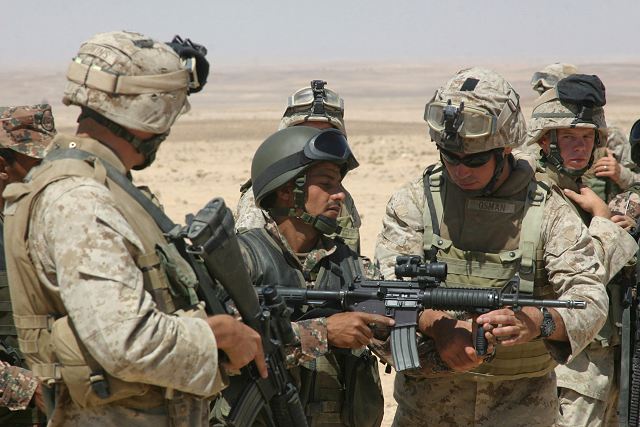 In 2013, the Heritage Foundation would publish an article titled, “Hagel Announces Deployment of U.S. Troops to Jordan in Response to Worsening Syria Crisis,” claiming:

Although initially tasked with playing a support role in assisting Jordan in developing contingency plans for mitigating the destabilizing spillover effects of Syria’s civil war, the troops could “potentially form a joint task force for military operations, if ordered.” The headquarters staff will lay the foundation for a formal U.S. military presence that could grow to 20,000 troops or more, if the Obama Administration activates contingency plans for a major U.S. military intervention.

According to most estimates from across the Western media, approximately 1,000-2,000 US service members are currently stationed in Jordan. Expanding that number to 20,000 or more would surely be noticed by Syrian, Russian, and Iranian intelligence agencies. Likewise, the creation and deployment of a full-scale invasion force created by America’s Persian Gulf allies or NATO-member Turkey would likewise be noticed long before having a chance to storm Syrian territory.

Instead of a full-scale invasion, what is more likely is the incremental Balkanization of Syria, with Turkey already holding significant territory in the north, Israel maintaining its long-term occupation of the Golan Heights in the west, US troops occupying Syrian territory in the east, alongside Persian Gulf sponsored terrorists holding both the eastern city of Raqqa and the northern city of Idlib.

A US-led incursion into southern Syria could likewise carve off territory even if such an incursion falls short of reaching Damascus or toppling the government presiding there.

With focus elsewhere – particularly along Syria’s border with Turkey and amid operations aimed at taking back both Raqqa and Idlib – Jordan has enjoyed relative obscurity amid geopolitical analysis. However – as the endgame approaches and the US increasingly becomes desperate – Jordan’s role as a staging point and potential vector into Syria for additional US troops and for the carving out of additional Syrian territory should be noted and brought to the public’s attention.

Additionally, it is important for the public to understand that America’s “new policy” toward Syria is simply a redux of years – even decades – of attempts to use both proxy and direct military force against the Syrian state to depose its government and create either a proxy or a failed state to take its place. While many personal and political motivations will be assigned to US President Donald Trump for why “he” is pursuing expanded aggression against Syria, it should be noted that the plans “he” is now executing sat on former President Barack Obama’s desk for years waiting for the right moment to be implemented – only to be complicated by Syrian resilience and Russia’s 2015 intervention.

With this in mind, and with pressure on the Jordanian government, Jordan may rein in US forces operating from its territory, hindering, even if ever so slightly, US ambitions to further compound Syria’s tragic, ongoing conflict.