Most of us think of blimps as an antiquated technology. On the rare occasion that we see one, we assume that we’re probably going to see an ad on the side. But Americans are largely unaware that the sight of one of these aircraft could also mean that the NSA is spying on them.

That’s because, according to The Intercept, the NSA has several blimps, which can be equipped with devices that are capable of eavesdropping on people below it. One of these blimps has actually become a common sight in Maryland, which is where the NSA headquarters is located.

Ostensibly these airships are to be used in countries like Iraq and Afghanistan, and Maryland is just where they’re being tested. You wouldn’t think that a blimp would be suitable for the battlefield, but apparently some of them have a low infrared signature, and are invisible to radar. 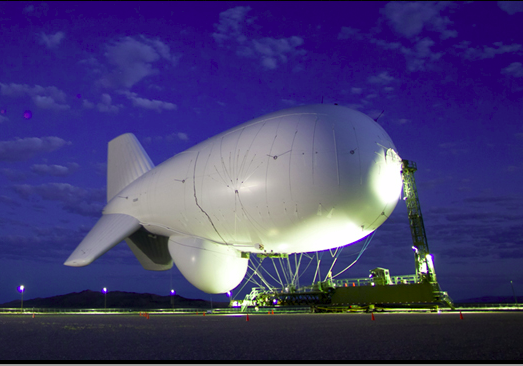 However, that doesn’t mean the NSA has never tested one of their blimps on the American people.

Back in 2004, a division of the NSA called the National Tactical Integration Office fitted a 62-foot diameter airship called the Hover Hammer with an eavesdropping device, according to a classified document published Monday by The Intercept. The agency launched the three-engine airship at an airfield near Solomons Island, Maryland. And from there, the blimp was able to vacuum up “international shipping data emanating from the Long Island, New York area,” the document says. The spy equipment on the airship was called Digital Receiver Technology — a proprietary system manufactured by a Maryland-based company of the same name — which can intercept wireless communications, including cellphone calls.

The author reveals that “Unsurprisingly, privacy groups have expressed concerns about the prospect of the blimps being used domestically to spy on Americans. However, military officials have often been quick to dismiss such fears.”