Trump told ABC News he was “very honored” that the stock market gave his presidency a symbolic vote of confidence. “Now we have to go up, up, up. We don’t want it to stay there,” he said.

Everyone loves a bull market. Expecting stocks to go up forever, however, is a dangerous mindset to have as an investor. Recent history suggests that major milestones for the Dow should be viewed less as cause for celebration and more as warning signs.

The financial media, of course, cheered the milestone, feeding the public Wall Street propaganda rather than healthy skepticism.

Sure, the perma-bulls will always concede, there might be a pullback at some point. But books like Dow 36,000, released in 1999, bolstered the conventional wisdom that stocks were destined march higher over the next decade.

Anyone thinking of buying stocks at today’s lofty valuations would be well advised to take heed of what happened to investors who bought at Dow 10,000 in 1999 and held on through today.

Yes, they did double their money (before dividends) in nominal terms.

But in real terms, the Dow hasn’t made any progress.

Investors would have been better off selling stocks when the Dow hit 10,000 and using the proceeds to purchase gold bullion.

Trump Knows He Inherited a Bubble

The price/earnings ratio on the Dow is now arguably in bubble territory. Valuations have been artificially inflated in no small part by the Federal Reserve. Last September, candidate Donald Trump called the Fed-fueled market “a big, fat, ugly bubble.”

President Donald Trump no longer sees it that way. Dow 36,000 here we come!

It will come eventually – even if only because of currency debasement. That doesn’t necessarily mean the next 5,000 point move in the Dow will be to the upside.

History suggests that investors will have better odds of making real gains in stocks by waiting to buy at lower valuations. A bear market in equities could commence at any time, and a final bottom could be years away. In the meantime, stocking up on alternative assets including precious metals will give you other opportunities to make real gains regardless of where the Dow heads over the next few years.

Will Trumpflation Be to Metals What Stagflation Was in the 1970s?

Gold and silver markets have posted some of their biggest up moves when the stock market has been down or flat. The stagflationary late 1970s weren’t kind to stocks, but they gave rise to a spectacular bull market in precious metals. It culminated in January 1980 with the price of an ounce of gold briefly equaling the quote on the Dow Jones Industrials. 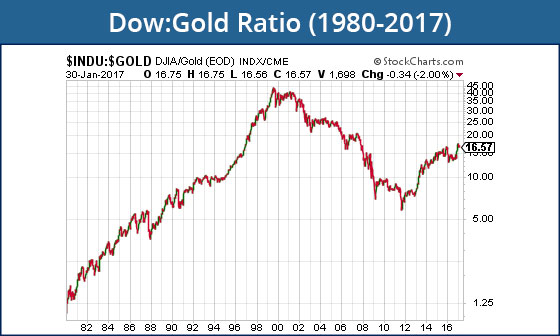 Could gold prices one day meet the Dow at 20,000 or some other number? A return to the 1:1 ratio is an extreme scenario, to be sure. But it’s not far fetched at all to suppose that history might repeat itself.

Even if Dow to gold only got back to a 4:1 ratio, moving out of stocks and into precious metals at current levels would be the trade of a lifetime. It would imply a potential $5,000 gold price to a 20,000 Dow – a 317% return on gold versus a 0% return on stocks in this hypothetical scenario.

In any major bull market for precious metals, the more volatile metal – silver – can be expected to post the bigger returns. Silver, being both a precious metal and an industrial metal, may also be well suited to benefit from Donald Trump’s pro-industrial policies. Silver is essential in many areas of manufacturing, especially electronic and high-tech products.

Silver is also one of the world’s most enduring forms of money. Along with gold, silver stands as a “hard” alternative to depreciating fiat currencies and bubbly financial assets.