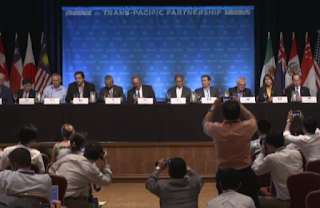 Negotiators of the secretive Trans-Pacific Partnership (TPP) announced Friday that they had failed to finalize the deal after several days of talks in Hawaii.

Negotiations stalled when national governments failed to accede to corporatist demands to open their borders and allow “people, goods, capital and information to flow freely through the zone,” as Japanese Trade Minister Akira Amari described TPP’s goals at a news conference Friday evening.

Striking a deal over how long to protect data used to develop biologic drugs was described as the biggest source of frustration by a source from a non-U.S. negotiating nation.

U.S. drug manufacturers want 12 years, but Australia wants five. A compromise of seven or eight years is seen as a possible compromise.

“The US was on one side of the issue, while practically every other country were on the other side,” the source told Associated Press.

Division between the U.S. and Japan over cars and New Zealand’s reluctance to set terms on dairy also played a role in the halting of finalization, reports ABC Australia.

The talks in Hawaii were expected to bring about the finalization of the economic regulatory deal which spans 12 nations. This would have satisfied the Obama Administration who had pressed Congress earlier in the summer to delegate their ability to amend treaties to the President for quick ratification.


As Curtis Ellis of WND concludes, the negotiations are likely now to stretch into the upcoming presidential election.

“The failure to reach an agreement assures TPP will be an issue in next year’s presidential contest. Insurgent candidates Donald Trump on the right and Bernie Sanders on the left oppose the deal, pressing establishment candidates to take a stand on a pact that is deeply unpopular with voters across the political spectrum,” Ellis writes.

The Trans-Pacific Partnership has been described as the largest economic regulatory deal to come under negotiation. The deal involves the nations of Brunei, Chile, Singapore, New Zealand, Australia, Canada, Japan, Malaysia, Mexico, Peru, the United States, and Vietnam, encompassing 40 percent of global GDP.

The TPP has come under harsh scrutiny due to the level of secrecy surrounding the deal. Members of the U.S. Congress have been threatened with reprisal if they speak publicly about the treaty’s contents.

What’s also extremely concerning is the fact that members of Congress must enter a private room in the basement of the capital, where they must surrender their belongings while totally absent of legal assistance in order to review some of the text in the treaty.

Some have even argued that the TPP has very little to do with trade.