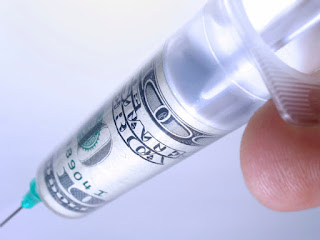 “When people say, ‘Follow the money,’ they forget that modern culture itself is about dollars, and where the big money goes tells you a great deal about the culture and its legalized crimes against the population. This isn’t hard to understand. It’s like saying, ‘The vampires who sell war do it for profit.’ And lo and behold, war and violence are a centerpiece of our culture. If you don’t understand that, just go to the movies.” (The Underground, Jon Rappoport)

The recent California law (#SB277) ordering all public and private schoolchildren to receive the full schedule of vaccines has a context.

I’m not just talking about corporate donations to legislators. I’m talking about the state of California itself and the businesses that operate here.

For example, the University of California system of colleges is a vast sprawling kingdom. Biomedical $ grants pour in, and a significant portion of the money funds vaccine-related research.

I began searching for and itemizing such grants. They’re easy to find. But then, something overtook me: California companies that do biomed and biotech research and sell related products.

At a site called labrat.com, I found a list of California “biotech, pharmaceutical, medical device, and chemical company jobs.”

I scrolled down the list and counted. It took a long time. I arrived at a total of 517 companies. I was somewhat taken aback. That’s a large number.

But then I found a site called biopharmguy.com. It featured its own list of “Biotech companies in San Diego and Southern California.” In just that part of the state, I counted an astonishing 660 biotech companies.

And in that context, a mandatory vaccine law is simply par for the course.

Individual rights re vaccination? The freedom to choose? Vaccine dangers? Never heard of it.

Yes, the natural health dollar is also significant in California, but it has yet to become a major political force. Proponents of a 2012 GMO ballot initiative to label GMO food couldn’t get their measure passed. And owing to a 2014 California law regulating agriculture, there will apparently be no more bans against growing or selling GMO food. Prior to the law, four California counties had banned GMOs.

Biotech, biomed, GMO, medical drugs, pesticides—all these areas overlap. The companies who do business in these sectors form a strong money culture. And state politicians, including Governor Jerry Brown, are aware of that fact.

Illustrating Brown’s position, here is a quote from James Fallows’ 2013 profile in The Atlantic:

Brown’s reduced and balanced budget includes more spending for what he considers the big challenges of the future: clean-energy initiatives, an expensive (and controversial) north-to-south high-speed-rail project, new canals and aqueducts, even California-based medical-research projects beyond those sponsored by the National Institutes of Health. (emphasis added)

Even with a reduced state budget, and even though there is already a flood of $$ for medical research, Brown saw fit to inject more.

Turning back, rejecting, stepping on the mandatory vaccination bill would have sent the wrong signal to biomed businessmen. It was never going to happen.

One of the largest natural health companies in California, Whole Foods, is no help, to say the least. Now that the US Congress is on the verge of denying any state the right to pass a mandatory GMO labeling law, Whole Foods is poised on the edge of a new upswing in sales. Why? Because it uses a private company to verify that many of its products are GMO-free. So it has a leg up. It produces its own food labels. Under the guise of stating “we don’t endorse political positions,” Whole Foods makes more money as the culture becomes more repressive. And the company knows that.

What about the business of doctors in California? A 2014 report titled, “California Physicians: Surplus or Scarcity?” from the California Healthcare Foundation Almanac, presents a mixed bag of very interesting figures:

From 1993 to 2011, the number of doctors in California has grown by 39%, double the rate of population growth. Patient demand for medical care will continue to expand.

And finally, nearly 20% of medical care in California is delivered by non-physicians (i.e., nurse practitioners and physicians’ assistants).

What do all these statistics imply? Increasingly, to serve (toxify) the population, medical care in California will become “automatic,” one-size-fits-all, quick in and out.

That’s a perfect climate for mass vaccinations, which will cover all the disease labels drug companies can exploit.

When searching for reasons governments pass laws, the money trails need to be followed—especially the trails that are not so obvious.

It turns out that California isn’t really the “health nut” state. It’s the biomed biotech state now. On every front. That’s where the dollars are, and where they are going.

The power players are on board.

Mandatory vaccination was a slam-dunk from the start. It took a while to make it happen, but when the ducks were assembled in a row, the movers moved.

The last thing they care about or think about is the highly toxic effects of the vaccines.

As I’ve pointed out for the past 25 years, the medical cartel is intent on enrolling every person in a cradle-to-grave system of treatment. Trudging along a half-light somber path, the patient receives 40 or 50 diagnoses of diseases and disorders during his life, is drugged, and sliced and diced, into a debilitated state that ends in the graveyard.

Vaccines are a central feature of this plan. Aside from their toxic effects, the ongoing schedule of shots and boosters trains the patient in the vital item called compliance—which sets up the rest of the medical program through the years and decades.

Which is why the freedom to reject medical treatment is vital.

Which is why mandating vaccines is viewed by the cartel as phase one. Compulsory vaccines today, compulsory drugs tomorrow.

This is the covert op behind all national health insurance programs, including Obamacare.

3 Comments on "Mandatory vaccination in California: follow the biggest money"