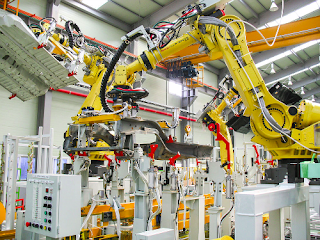 Ever since China joined the World Trade Organization in 2001, the US has had millions of manufacturing jobs outsourced to the growing nation. But what most Americans don’t realize is that many of these Chinese workers also feel cheated by this arrangement. They’re just as frustrated with us, because they can’t afford the products that they build for the American consumer. Over the years, this resentment has fueled a surge of labor strikes and demands for better pay for these workers.

So it should come as no surprise that factory owners are more than willing to automate these jobs. While American workers have good reason to be pissed about having their jobs shipped overseas, in the very near future they’re going to find themselves in the same boat as every other blue-collar worker in the world. Their jobs won’t be outsourced to other countries, they’ll disappear entirely. Hundreds of employees with the Changying Precision Technology Company just experienced this trend firsthand.

The Changying Precision Technology Company factory in Dongguan has automated production lines that use robotic arms to produce parts for cell phones. The factory also has automated machining equipment, autonomous transport trucks, and other automated equipment in the warehouse.

There are still people working at the factory, though. Three workers check and monitor each production line and there are other employees who monitor a computer control system. Previously, there were 650 employees at the factory. With the new robots, there’s now only 60. Luo Weiqiang, general manager of the company, told the People’s Daily that the number of employees could drop to 20 in the future.

The robots have produced almost three times as many pieces as were produced before. According to the People’s Daily, production per person has increased from 8,000 pieces to 21,000 pieces. That’s a 162.5% increase.

The increased production rate hasn’t come at the cost of quality either. In fact, quality has improved. Before the robots, the product defect rate was 25%, now it is below 5%.

This is the world we live in now. The days of being able to receive decent pay for a difficult, but simple job, are pretty much over. So if you have a job that doesn’t require creativity in some way, consider yourself warned. These jobs can and do disappear overnight, and if you don’t have some skill that will be viable in the future, the robots will leave you in the dust.

But I digress. The big question that is on my mind, is how will a nation like China absorb the ramifications of this trend? While the US has some very severe issues with income inequality, even our poorest workers often still earn much more than most workers around the world. When our manufacturing base started hemorrhaging jobs, we still had some distance to fall.

China, however, never became wealthy from absorbing these jobs. Sure, the government and their financial elite reaped plenty of benefits, but most of their people are still very poor. They’re not going to experience what the American worker experienced in the 19th and 20th centuries. Their factory workers will never reach the point where they will be able to make a middle-class wage from a blue-collar job. Those jobs will disappear before that happens.

Not only is China’s debt-fueled economy unraveling, and not only has their one-child policy all but guaranteed a future with more seniors than their system can support, but hundreds of millions of their young workers won’t have any of these manufacturing jobs to carry them through. What then? Will they do what America has been struggling to do for several decades? Will they try to make the transition from being a manufacturing juggernaut, to being a service economy? And, if they do, how much more will these jobs pay?

Those questions should inspire dread among America’s current workforce. The vast majority of our jobs are now in the service sector. If China turns into a service-dominated economy, how many of those jobs will we lose?