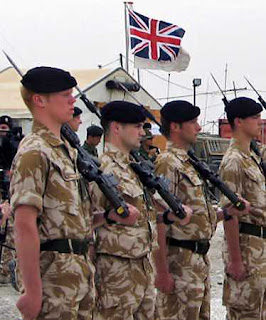 “More than 120 members belonging to the elite regiment are currently in the war-torn country” covertly “dressed in black and flying ISIS flags,” engaged in what’s called Operation Shader – attacking Syrian targets on the pretext of combating ISIS.

Around 800 Royal Marines and 4,000 US counterparts were on standby to intervene on short notice if ordered.

At least part of its current covert ground operation is under US command – so-called “smash” units traveling in pickup trucks able to launch mini-UAVs to scan terrain for targets to attack.

Over 250 UK (and perhaps US) specialists are involved to provide communications support, the Sunday Express explained.

British Defense Secretary Michael Fallon said “(o)ur actions and surveillance capabilities are freeing up other countries to strike in Syria.”

UK SAS forces are in Saudi Arabia training anti-Assad terrorists along with US operatives doing the same thing – including in Turkey, Jordan, Qatar and perhaps Israel.

US and UK claims about training so-called “moderate” rebels reflect smoke-screen cover for working directly with ISIS terrorists – trained, armed and funded abroad, funneled cross-border into Syria to fight Assad, now with US/UK and Canadian air support along with covert commandos on the ground.

A separate article discussed US airstrikes defending ISIS terrorists serving as US foot soldiers against Assad.

Separately, Turkish media reported President Recep Tayyip Erdogan saying Putin may have softened on Assad. (H)e may give up on” him.

Obama said he was “encouraged by the fact that Mr. Putin called him (in late June) and initiated the call to talk about Syria.”

I think they get a sense that the Assad regime is losing a grip over greater and greater swaths of territory inside of Syria and that the prospects for a (jihadist) takeover or rout of the Syrian regime is not imminent but becomes a greater and greater threat by the day. That offers us an opportunity to have a serious conversation with them.

“The Russian view is well-known,” he explained. “(I)t was reiterated by (Putin) during (his) conversation” with Obama. It hasn’t changed.

Putin opposes outside interference by any nations in the internal affairs of others. He supports the sovereign right of Syrians and other people to choose their own leaders and legislators.

Putin aide Yury Ushakov said “the current leadership of Syria is one of the real and effective forces confronting the Islamic State.”

Stephen Lendman lives in Chicago. He can be reached at lendmanstephen@sbcglobal.net. His new book as editor and contributor is titled “Flashpoint in Ukraine: US Drive for Hegemony Risks WW III.” http://www.claritypress.com/LendmanIII.html Visit his blog site at sjlendman.blogspot.com. Listen to cutting-edge discussions with distinguished guests on the Progressive Radio News Hour on the Progressive Radio Network. It airs three times weekly: live on Sundays at 1PM Central time plus two prerecorded archived programs.