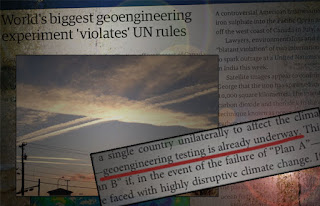 After years of critics in the alternative media pointing to the lines in the sky left by planes laying so-called “chemtrails” or persistent aerosols, and tying it to efforts to alter the climate, the official narrative is catching up.

A team of elder Silicon Valley scientists is building an audacious device that might solve one of humanity’s most profound dilemmas — a “cloud whitener” designed to cool a warming planet. […]

Their goal is to launch the nation’s first open-air field trial of controversial “geoengineering” at a still-unidentified site in Moss Landing. There, they would test the ability of an energy-efficient machine to hurl tiny seawater droplets into a graceful trajectory — the first step of a research project to boost the brightness of clouds to reflect rays of sunlight back into space. […]

“We are not interested in deploying it unless it’s necessary. But we’d like to have something available, so we know what works and what doesn’t work.”

Uh huh. So they just started for the first time ever? Right…

In truth, this cloud brightening experiment is being launched just months after several major meetings on geoengineering in the fall of 2014 and early months of 2015, which discussed moving geoengineering efforts “out of the lab and into the open.”

In the great wide open: Scientific studies of techniques for deliberately modifying the climate are getting ready to move out of the laboratory.

The only problem is that the definition of “laboratory” is ill defined — scientists cannot test this technology inside research buildings and may have been unofficially testing them in open air “lab” we live in — just as GMO crop scientists have done.

In other words, this is all according to the script, not reality.

Closer to reality, the evidence for chemtrails, and the uninvited use of geoengineering to modify cloud cover, remains hotly debated and very controversial, but continually observed and reported all across the world.

We don’t have proper disclosure about what exactly has been going on, but we weren’t born yesterday either. Citizen journalists remain our best chance of pressuring those working on these secretive projects to admit what has been taking place, and what, if anything, the ramifications may be for human health and the environment.