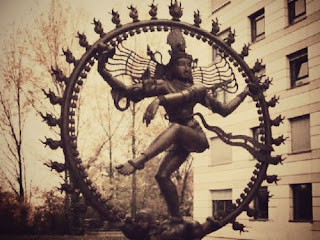 Many have already pointed out how strange (or absolutely fitting but in a chilling way) it is that they decided to put up a statue of Nataraj, the dancing form of the Lord Shiva that some have called the “dance of destruction,” outside of the large hadron collider CERN.

You can listen to Brave New World author Aldous Huxley explain the symbolism of that statue here.

Notice anything about this logo?

Now ask yourself why they are allowing bizarre occultic dance opera performances inside the collider itself (see below).

Guess searching for that God particle is so important they would build a multi-billion-dollar facility but take time out in their scientific pursuits for… performance art?

Even if you are not inclined to believe there is anything conspiratorial going on at CERN, you have to admit… at the very least, this is really, really bizarre.

15 Comments on "Why Are They Hosting a Weird Occultic Dance Opera Inside CERN?"