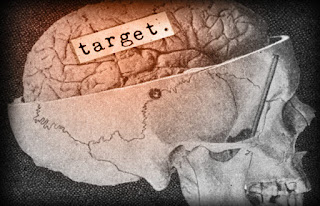 Have you ever wondered what it would be like to randomly come down with a touch of schizophrenia?

Probably not. Or if you did, it was probably in a nightmare.

Well now, with the help of a little futuristic technology, companies who just can’t get over themselves long enough to respect your privacy for one second can make your worst nightmares come true.

In the future, no one will be able to nap quietly for five minutes on a train without being sold some $#%&! And from INSIDE his or her head!!

From the video’s description:

A silent, vibrating window is turned into a completely new audio medium. A special transmitter releases high-frequency oscillations that are converted into sound in the brain — without any acoustic signals travelling through the ear.

That’s right. Now companies will be using silent sound technology to send out high frequency vibrations through commuter train windows to beam sounds directly into a person’s head, and he or she will be the only lucky person that can “hear” it.

This is reminiscent of that sonic billboard the show Paranormal State put up a few years back:

People walking underneath it would suddenly hear what sounded like a voice whispering to them “It’s not your imagination,” and “What’s that? Who’s there?” Many likely failed to realize it was a giant billboard sitting atop a nearby skyscraper transmitting an “audio spotlight” from a speaker on the rooftop of the building which could only be heard by an individual (and only that individual) as he or she passed on the sidewalk below.

This kind of technology isn’t new; it’s just that, until recently, only the military was wielding it.

Go back a few years. Published on October 27, 1992, U.S. patent 5,159,703 for a “silent subliminal presentation system” was reportedly developed for military use. The abstract defines the technology as,

A silent communications system in which nonaural carriers, in the very low or very high audio frequency range or in the adjacent ultrasonic frequency spectrum, are amplitude or frequency modulated with the desired intelligence and propagated acoustically or vibrationally, for inducement into the brain, typically through the use of loudspeakers, earphones or piezoelectric transducers.

“For inducement into the brain…” It’s been widely reported that the Pentagon secretly tested this technology out on the Iraqis in Operation Desert Storm, causing tens of thousands to surrender without a single shot fired. According to a paper entitled, “The Sound of Silence: The Antithesis of Freedom” by Dr. Ott, these tests were later reported on in foreign press, but censored here in America:

On March 23, 1991, a news brief was released in the form of an ITV News Bureau Ltd (London) wire service bulletin entitled “High-Tech Psychological Warfare Arrives in the Middle East”. This was during the administration of George Bush Sr., during “Operation Desert Storm” and describes in remarkable detail a US Psychological Operations (PsyOps) covert operation successfully deployed against Iraqi troops in Kuwait…

Here is what the British press reported on the incident –while the American press was censored:

… an unbelievable and HIGHLY CLASSIFIED PsyOps program utilizing “Silent Sound” techniques was successfully deployed. The opportunity to use this method occurred when Saddam Hussein’s military command-and-control system was destroyed. The Iraqi troops were then forced to use commercial FM radio stations to carry encoded commands, which were broadcast on the 100 MHz frequency. The US Psy-Ops team set up its own portable FM transmitter, utilizing the same frequency, in the deserted city of Al Khafji. This US transmitter overpowered the local Iraqi station. Along with patriotic and religious music, PsyOps transmitted “vague, confusing and contradictory military orders and information”.

Subliminally, a much more powerful technology was at work, however. A sophisticated electronic system designed to ‘speak’ directly to the mind of the listener; to alter and entrain his brainwaves, to manipulate his brain’s electroencephalographic (EEG) patterns and thus artificially implant negative emotional states — feelings of intense fear, anxiety, despair and hopelessness were created in the Iraqi troops. This incredibly effective subliminal system doesn’t just tell a person to feel an emotion, it makes them feel it; it implants that EMOTION in their minds.

Is it possible? The military has admitted as much in a declassified Army document entitled, “Bioeffects of Selected Nonlethal Weapons,” released via FOIA in response to a request regarding microwave hearing effects back in 2006. Under the heading “microwave hearing,” the document discusses the use of pulsed radio frequency fields to communicate directly into someone’s head.

The following year, DARPA released its plans for a “Sonic Projector” (as reported in Wired):

The Sonic Projector will be designed to be a man-deployable system, using high power acoustic transducer technology and signal processing algorithms which result in no, or unintelligible, sound everywhere but at the intended target.

These have also been referred to as “voice of God” weapons. The LRAD, or Long Range Acoustic Device, can make people hear much more than just painful, high-pitched screeching sounds….

These are just a few examples. Do a little research. This stuff has been around on record for decades.

Making people hear voices that no one else can hear is not even remotely new anymore, yet when stories come out about people who claim to be victims of these kinds of technologies today, those victims are automatically called insane, diagnosed with schizophrenia and other mental illnesses, drugged up, pitied and/or ostracized.

Meanwhile, companies are using similar technologies to make people hear advertisements directly in their heads that no one else can hear in order to sell products!

Anyone see a problem here (especially with the increasing rates of schizophrenia over the last four decades)?

By the way, wasn’t it George Orwell’s 1984 that talked about how the mind was the last refuge?

2 Comments on "Who Needs a Billboard? Ads of the Future Will Be Beamed Directly into Your Head"