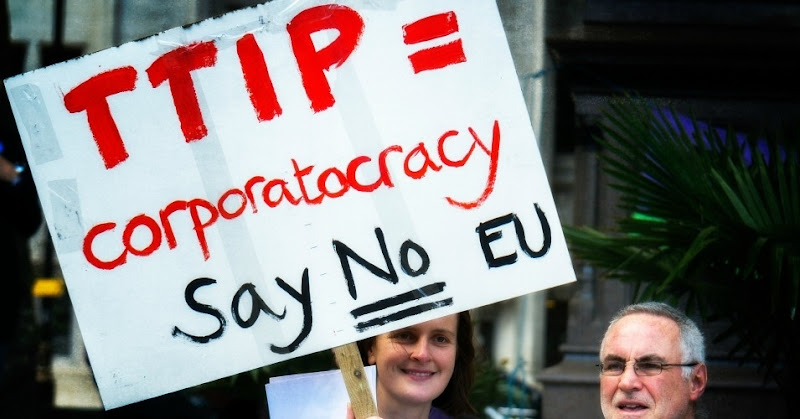 While most of Europe had their eyes and ears on the financial situation in Greece, a controversial trade deal that would affect all of the European Union was being negotiated.

On Wednesday, the European Parliament voted to pass a resolution that advanced the international trade deal being negotiated between the U.S. and the E.U.—the Transatlantic Trade and Investment Partnership (TTIP).

With a vote of 436 to 241, the parliament approved a resolution related to the Investor-State Dispute Settlement, or ISDS. Under ISDS, foreign corporations would be allowed to appeal legal decisions to international tribunals rather than face domestic courts. Critics fear that this could lead to a loss of sovereignty and the enrichment of transnational corporations. The provision has been criticized by opponents of the TTIP and the equally unpopular Trans-Pacific Partnership (TPP).

The resolution approved on Wednesday is designed to fix ISDS by creating a system where “the jurisdiction of courts of the EU and of the member states is respected, and where private interests cannot undermine public policy objectives.” As with the TPP in America, the European Union Parliament is powerless to change the TTIP—they can only approve or reject the agreement.

The Independent reported that the vote did little to inflict positive change on the ISDS:

…[T]he vote itself was controversial. An amendment rejecting ISDS entirely, which the European public has repeatedly called for, wasn’t even voted upon thanks to some creative procedural changes from (Parliamentary President Martin) Schulz. Instead a watered-down version of ISDS was passed which doesn’t tackle the fundamental issues and which has been described as ‘ISDS lite.’

A European Citizens’ Initiative against TTIP currently stands at over 2,300,000 signatures, a number which should have triggered a response from the European Commission, the unelected body negotiating the deal. Instead the EC dismissed it out of hand as illegitimate. The EC’s own public consultation on one of the most controversial parts of TTIP received a resounding no from a staggering 97 per cent of respondents – again, ignored.

What today’s vote also signals is that the old system of investor-state dispute settlement should not and cannot be reproduced in TTIP – Parliament’s call today for a ‘new system’ must be heard, and it will be.

Following the vote, the Center for International Environmental Law (CIEL) said that “the resolution fails to address the threat to public health and environmental laws in the EU posed by TTIP, and it ignores a growing chorus of voices that have raised concerns about this risk.”

In April, Reuters reported that “a recent YouGov poll showed that 43 percent of Germans believe TTIP would be bad for the country, compared to 26 percent who see it as positive.” The numbers seem to represent discontent across the E.U.. Recently, the town of St. Gilles in Brussels adopted a resolution criticizing ISDS, also voting to declare itself “a TTIP free zone.”  In April, thousands of activists across Germany and other E.U. member-states rallied against the TTIP.

What are the activists worried about? Much of the fear around the TPP and TTIP seems to be related to fear of national laws being overridden by international bodies, or nations being forced to accept products from other nations who are also signatories to the treaties. But is there any truth to these fears?

In late May, The Independent reported that the TTIP was being used to force American pesticides onto the European Union.

According to documents obtained by the Pesticides Action Network (PAN) Europe, a visit from high-level officials from the US Mission to Europe and the American Chambers of Commerce (AmCham) in July 2013 convinced the EU to drop planned rules that could have led to the banning of 31 pesticides containing health hazardous chemicals.

AmCham representatives reportedly ‘complained about the uselessness of creating categories and thus, lists’ of prohibited substances during the meeting, and US trade officials ‘emphasised the need for an impact assessment,’” The Guardian has reported.

The European Commission at first resisted, claiming that though they back TTIP ‘they would not like to be seen as lowering EU standards,’ but relented later that same day, a letter from the desk of the Commission’s secretary-general has shown.

It seems like these “free trade” deals are designed to strip individual nations of their resources and empower global governmental institutions. If the people of the world want to have a choice in their food, privacy, and freedom, now would be a good time to spread the word about the dangers associated with the TTIP and the TPP. But spreading the word is only one part of this resistance. If future generations are to know what freedom means we must actively build the new world we wish to see.

What is the TPP? The TTIP? Find out in the video below:

4 Comments on "The Vote You Missed: TTIP Moves Closer to Reality"