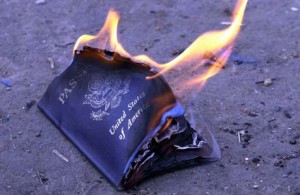 Another small step for authoritarian bureaucracy, another massive leap forward in the destruction of Americans rights to due process and full protection under the law.

Increasingly, designations on watchlists, both official and unofficial, are replacing due process of suspicion, investigation, arrest, charge and trial, and skipping ahead to simply blacklist individuals and deny them equal rights.

This time, the legislation centers around passports, which would now be revoked upon any suspicion, whatsoever and despite a lack of evidence of wrongdoing, or links to foreign terrorists groups. But these links to ‘terrorism’ are not legally defined or limited, nor do they result as a penalty for criminal convictions, but from being added to a list. Gestapo, anyone?

A bill passed by the U.S. House of Representatives would allow the government to restrict Americans’ travel through the revocation of passports based upon mere suspicions of unscrupulous activity. This bill represents another dangerous step forward in the war on terror and the disintegration of American due process.

H.R. 237, the “FTO (Foreign Terrorist Organization) Passport Revocation Act of 2015,” will allow the U.S. Secretary of State the unchecked authority to prohibit individuals from traveling internationally. According to the bill, the Secretary may unilaterally revoke (or refuse to issue) a passport from “any individual whom the Secretary has determined has aided, assisted, abetted, or otherwise helped an organization the Secretary has designated as a foreign terrorist organization pursuant to section 219 of the Immigration and Nationality Act (8 U.S.C. 1189).”

The bill did not bother to define what the terms “aided, assisted, abetted, or otherwise helped” actually mean, in legal terms. The power has been left open-ended so that it can mean whatever the secretary wants it to mean. Needless to say, a bill like this would be easily abused.

The travel restriction requires no presumption of innocence for the targeted individual; no explanation; no public presentation of evidence; no opportunity for a defense; no checks and balances on the power. The bill does not outline any appeals process for the targeted individual. The only stipulation is that the Secretary of State must issue a report to the Senate Committee on Foreign Relations and the House Committee on Foreign Affairs — “classified or unclassified.” The bill does not state that either committee can reverse the secretary’s decisions.

In over-the-top language, the bill’s sponsor Rep. Ted Poe (R-TX) vows to go after “turned Americans” and subject them to a legal status backwards enough to predate the Magna Carta:

“The House has now acted to locate and contain these traitors,” Rep. Poe said in a press release. “These Benedict Arnold traitors who have turned against America and joined the ranks of foreign radical terrorist armies should lose all rights afforded to our citizens.”

Poe’s statement about “losing all rights” is rather startling, considering that about half of the Bill of Rights is explicitly written to protect people suspected of crimes from being abused by overzealous government! The dangers of a government wantonly revoking the rights of citizens just because the a bureaucrat puts them on a list would be severe indeed; fitting of a police state. Recall that these individuals can be targeted without even facing official charges of wrongdoing.

If trying to defend”freedom”, he has missed the point.

If owing allegiance to the fascist oligarchy, then be warned. Anyone deemed an “enemy” of the state, rightly or wrongly, has been targeted, while the entire population has been designated a potential enemy, monitored for suspicion and “examples.”

Poe’s bill is in close keeping with Sen. Lindsey Graham’s stunning endorsement of the NDAA, adamantly stating that “enemy combatants” do not get American rights, and do not get a lawyer, regardless of birthplace.

Consider what this could mean in cases where the person of interest is not a suspected member of ISIS, but a suspected patriot/militia/Constitutionalist/sovereign citizen. Can you be stripped of your rights for criticizing your leaders or speaking out about issues?

These concepts, even if cheered on in the context of fighting a terrorist enemy, are poorly defined and inviting abuse, and speeding up the destruction of our rights.

Also See:
Disloyal to the United States? Wesley Clark Wants to Detain You For Duration of War on Terror