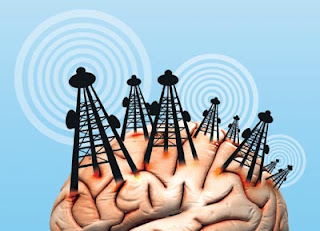 Every pro-‘smart’ technology proponent – be it manufacturer, supplier, utility or Public Utility Commission – invariably likes to trot out ‘safety’ studies done 50 or more years ago on the then emerging radar technology that was considered ‘safe’. Why? Furthermore, what does that apparent ‘conspiracy’ say about keeping current and up to date on the very real science of how non-ionizing radiofrequencies (RFs) and electromagnetic frequencies (EMFs) cause harm to humans – the brain, in particular – and especially, children’s brains and bodies?

Well, recently the citizens’ ad hoc committee PASMA put out a Press Release, which addresses that very issue: RF/EMF radiation. I have permission to cite it verbatim; it’s listed below. Certainly, the information imparted there should cause every parent to become concerned about those ‘smart’ technology devices and the harm they are causing their children, especially 24/7/365 “dirty electricity” from AMI Smart Meters for electricity, natural gas and water utilities.

A real and pressing concern should be about Wi-Fi in schools and the workplace, which increasingly is being implicated in migraine headaches and numerous other sorts of health anomalies. Young children are particularly vulnerable. I’ll let the PASMA Press Release speak for itself:

WHY ARE THE PA PUC AND PA UTILITY COMPANIES, INCLUDING THE PA STATE LEGISLATURE, EXPOSING PENNSYLVANIA’S CHILDREN TO POSSIBLE BRAIN CANCER?

Pennsylvania’s children are being subjected to excessive electromagnetic frequencies in cell phones, Wi-Fi, and other “smart” gadgets that function by using radiofrequencies.

Dr. Mary Redmayne, of Monash University in Melbourne, Australia, published the paper “International policy and advisory response regarding children’s exposure to radio frequency electromagnetic fields (RF-EMF)” in the journal Electromagnetic Biology and Medicine, 2015; 1 DOI: 10.3109/15368378.2015.1038832, in which she advises, “[U]sing and storing a device at least 20cm away from the body, and when using devices offline then to put them in flight mode, turn Wi-Fi off at night, and to avoid keeping devices in the bedroom.”

PASMA wants to advise parents, legislators, and utility companies that certain devises cannot be turned off—at night or any time. We are referring to the AMI Smart Meters, which constantly gather and transmit information using microwave technology 24/7/365, plus send “dirty electricity” into homes.

Children’s bodies, because of their size and quick growth patterns, are more vulnerable to RF and EMF radiation, the brain in particular. What moral, or supposedly legal, rights do the PA PUC, PA state legislature, PA utility companies, and PECO, an Exelon Company, in particular, have to mandate and harass consumers into accepting RF-EMF emitting AMI Smart Meters or cut off their electric power?

According to the U.S. EPA, exposing people to toxins and cancer-producing substances is considered criminal activity. Furthermore, the EPA, as published in The Indiana Gazette of October 4, 1990, knew about the cancer-causing ability of EMFs when that newspaper stated, “But the EPA has stopped short of the probable carcinogen conclusion, which could have drastic implications for regulation of the American utility industry and in the workplace. Louis Slesin, power-industry watchdog and the editor of Microwave News, published in his journal’s most recent issue a paragraph from a rough draft of the EPA study recommending that low-frequency electromagnetic fields be classified as probable human carcinogens.” The Indiana Gazette article goes on to say, ‘The paragraph,’ Slesin said in a recent interview with The Morning Call, ‘has since been deleted from the report, which won’t be issued in official, final form until this month, according to the July 20 issue of TIME magazine.’” What did EPA know; did not want to admit; and why did the EPA delete “the paragraph” from the report?

However, the World Health Organization’s International Agency for Research on Cancer (IARC) has declared electromagnetic fields a class 2b carcinogen, the same as lead, DDT, dioxins, PCBs, etc., based on an increased risk for glioma, a malignant type of brain cancer, associated with wireless phone use—the same RF/EMF technology Smart Meters use to surveil, transmit and receive information to and from homes retrofitted with those dangerous AMI meters.

The seriousness of Smart Meter electromagnetic radiation pollution increases because of “dirty electricity” Smart Meters send into homes through electrical wiring. Furthermore, those Smart Meter EMFs are constant 24/7/365 with no escaping from them, and no turning them off!

PASMA suggests that a class action lawsuit needs to be instituted against Pennsylvania utility companies that install mandatory Smart Meters, and the PA PUC, for enabling and supplying, under duress for many customers, a cancer-producing – class 2b carcinogen – technology that subjects Pennsylvania children to constant exposures to brain-cancer-producing EMFs and RFs.

The Pennsylvania state legislature must come to grips about RFs/EMFs/Smart Meters and become involved to correct this horrendous and ever-present health hazard for Pennsylvania’s children.

Smart Meter RF/EMF and dirty electricity exposures are 24/7/365, plus more serious than school funding or any aspects that affect children—the future of humanity – and their brains and lives. That RF/EMF radiation constant exposure probably is the ultimate in child abuse, should be a no-brainer. Why is that permitted, especially in Pennsylvania?

My research into cell phones, which use the same radiofrequencies as Smart Meters do to collect, transmit and send back instructions to smart appliances on the Smart Grid, found the April 2013 Briefing Paper, “Campaign for Safe Cell Phone Use” [CSCPU] [1] in which some pretty interesting facts are supplied that everyone in today’s tech world needs to know, especially if you are having memory problems.

It’s gratifying that FCC is considering revamping mobile radiation standards and testing methods, as the same methodology has been in place for more than 15 years,” Davis said. “In a world where there are more mobile phones than people, and where cell phones are increasingly used by young people and children, it is essential that any new standards for cell phones or other wireless devices be based on protecting the youngest and most vulnerable populations.” [CJF emphasis added]

This was cited from the President’s Cancer Panel voicing its concern:

The 2009 U.S. President’s Cancer Panel pointed to cell phones and other wireless technologies as potential causes of cancer. In its recommendations, the panel stated:

Methods for long-term monitoring and quantification of electromagnetic energy exposures related to cell phones and wireless technologies are urgently needed given the escalating use of these devices by larger and younger segments of the population and the higher radiofrequencies newer devices produce.

Panel chairman, Professor Lasalle Lefall noted, “The increasing number of known or suspected environmental carcinogens compels us to action, even though we may currently lack irrefutable proof of harm.” [CJF emphasis added]

Then, there’s this cited from the U.S. Government Accountability Office (GAO) report, “Telecommunications: Exposure and Testing Requirements for Mobile Phones Should be Reassessed”:

By not formally reassessing its current limit, FCC cannot ensure it is using a limit that reflects the latest research on RF energy exposure. FCC has also not reassessed its testing requirements to ensure that they identify the maximum RF energy exposure a user could experience. Some consumers may use mobile phones against the body, which FCC does not currently test, and could result in RF energy exposure higher than the FCC limit. [CJF emphasis added]

Consider this in the CSCPU report:

The image below demonstrates the increased absorption of cell phone radiation within the brains of children. Studies show that those who begin using cell phones as children develop brain tumors at a faster rate. [CJF emphasis added]

The published study, “Exposure Limits: The underestimation of absorbed cell phone radiation, especially in children,” (Gandhi et al, 2011), notes that the industry-designed process for evaluating microwave radiation from phones results in children absorbing twice the cell phone radiation to their heads, up to triple in their brain’s hippocampus and hypothalamus, greater absorption in their eyes, and as much as 10 times more in their bone marrow when compared to adults.

A major study found an eight-fold increase in brain tumors in 20-29-year-olds after only five years of cell phone use (Hardell et al, 2004). Children and teens will have a lifetime of exposure; a 2011 Pew Research Study found that eight out of 10 teens sleep with their phones under their pillows. [CJF emphasis added]

The ironic part about all those pushers and enforcers of electronic communication and/or gadgets – be they Smart Meters, cell phones, Wi-Fi, etc. – is they ALL use radiofrequencies that emit non-ionizing radiation to send and receive signals, voice, photos, etc.

Additionally, Dr Sanjay Gupta, a neurosurgeon and CNN medical consultant, is on record as saying,

The data showed people who used a cell phone 10 years or more doubled the risk of developing a glioma, a type of brain tumor. [1]

May I direct readers to page 8 of the CSCPU report to understand what really goes on when you carry a ‘live’ cell phone on your body! Page 9 tells about the deceptive consumer radiation exposure warnings. Page 11 cites “myths cooked up by the cell phone industry.”

Several pages at the end of the CSCPU report contain a “gold mine” of scientific reports and media information regarding the serious electromagnetic frequencies harms from ‘smart’ and cell phone technologies. Many thanks to the producers of the CSCPU report for an excellent job.

Equipped with this information, what will you do to protect your children’s brains, especially from Smart Meter RFs/EMFs “dirty electricity” coming into the house 24/7/365, plus their constant Wi-Fi exposure in just about every U.S. classroom?

16 Comments on "Smart Meters, Wi-Fi and Cell Phones Can Cause Brain Cancers"