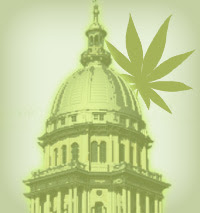 These are just two of several marijuana reforms advancing in Congress. Meanwhile sentencing reform is gaining steam, and the U.S. is shifting towards treating drug use as a health issue instead of a criminal justice issue.

“The stage has been set to end the federal government’s failed war on marijuana,” said Michael Collins, policy manager at Drug Policy Alliance’s Office of National Affairs. “A bi-partisan consensus has emerged in favor of reform.”

Last November nearly 72% of D.C. voters approved a ballot measure making it legal to possess and grow marijuana for personal use. The campaign to pass Initiative 71 was driven by public demands to end racially-biased enforcement of marijuana laws and was seen as the first step at taking marijuana out of the illicit market. A broad base of community support from multiple civil rights organizations, faith leaders and community advocacy groups supported Initiative 71, viewing it as an opportunity to restore the communities most harmed by the war on drugs.

After a political tug-of-war House Republican leadership was able to push through a controversial spending amendment that prohibited D.C. from legalizing and regulating marijuana sales, but the amendment allowed Initiative 71 to take effect. Thus, it is legal to possess, use, and grow marijuana in the nation’s capital but the sale of marijuana remains illicit and unregulated. D.C. officials, police, and drug policy experts have complained that Congress is undermining public safety by preventing the city from regulating marijuana, with some calling the situation “the dealer protection act.”

The Financial Services spending bill adopted by the Senate Appropriations Committee today deletes the congressional ban. If the bill becomes law, D.C. could finally regulate marijuana – setting time and place restrictions, requiring proper labeling and content control, establishing age restrictions, and taxing marijuana and using the proceeds for treatment, education, and rebuilding communities devastated by the failed war on drugs. While the House funding bill contains language restricting sales, the Obama Administration’s budget included language that would allow DC to move forward with regulated sales. A funding deal is expected to be hashed out by the House, Senate, and the Administration later this year.

The Senate Appropriations Committee also overwhelmingly approved, 16 to 14, an amendment today by Senators Merkley (D-OR) and Murray (D-WA) allowing banks to provide services to marijuana stores in localities where marijuana is legal. Currently, because marijuana is illegal under federal law, both medical and non-medical marijuana businesses are unable to access banking services like any other business. Consequently, many marijuana businesses operate on a cash-only basis, leading to huge public safety issues as businesses become the target of robberies, and are forced to hire armed security to protect their takings. Conducting business in all cash also makes it difficult for regulators and police to oversee marijuana businesses, track money, ensure people are paying taxes, and keep the marijuana industry transparent and accountable. By allowing marijuana stores to have access to checking accounts, credit cards, payroll companies and other financial services the Merkley amendment improves public safety and oversight.

Progress on D.C. and banking issues is just the latest victory for the Drug Policy Alliance and the marijuana reform movement:

Reform of U.S. drug policy is also moving forward in other areas:

The next 16 months is the biggest opportunity yet for ending the war on drugs. Voters in a number of states could vote on legalizing marijuana, including Arizona, California, Maine, Massachusetts, Ohio and Nevada. Several cities could move forward with implementing a LEAD-like program, including possibly Atlanta, Baltimore, Chicago, Houston, New Orleans, and San Francisco. Congress could finally overhaul federal drug laws.

“At this point, it’s probably only a question of when, not if, the failed war on drugs will come to an end,” said Bill Piper, director of national affairs for the Drug Policy Alliance. “We basically tore a page out of the campaign playbook for repealing alcohol Prohibition – get state after state to adopt reform and then force the federal government to change.”