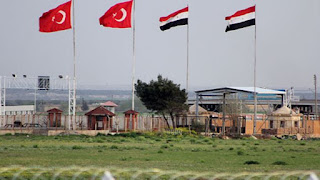 On Thursday (July 23, 2015), Turkey scrambled fighter jets and launched a small amount of ground forces into Syrian territory after clashes with ISIS fighters on the Turkey-Syria border.

Some are now wondering if the incident is an omen of a coming attack on Syria’s northern region.

The Turkish military claims that a Turkish border unit was attacked by 5 ISIS fighters armed with a rocket launcher and Kalishnikovs. The Turkish army unit reported that it had seized the weapons, killed one of the fighters, and destroyed three vehicles.

“The Daesh [Isis] terrorist who opened fire on our staff was killed and his ammunition was seized. […] Three vehicles belonging to the Daesh terrorists have been severely damaged in a fire attack,” the Turkish army statement said.

The Turkish Anadolu News Agency reported that one Turkish solider had been killed in the attack.

Turkish media also reported that F-16 fighter jets were being scrambled to the Turkish border in response to the incident.

The clashes come soon after Turkey announced a “crackdown” on ISIS across the country as well as after an ISIS bombing of a Kurdish demonstration. The PKK responded by taking the lives of two Kurdish policemen, threatening to throw the region back into the chaos it suffered years ago.

Still, such a military response is concerning given the fact that Turkey has been rumored to be considering an attack on Syria for some time and that these plans were moving ahead over the last few months.

It was reported by the Huffington Post on April 12, 2015 that the Turks and the Saudis are now in “high level talks” regarding an agreement to form a military alliance to remove Bashar al-Assad from power in Syria. The talks are being mediated by Qatar and have been known for quite some time. In fact, they have been taking place since at least February of this year.

When the meetings were finally made public to Western audiences, Barack Obama chimed in to support the plans by stating that

We both [Obama and the emir of Qatar] are deeply concerned about the situation in Syria. We’ll continue to support the moderate opposition there and continue to believe that it will not be possible to fully stabilize that country until Mr. Assad, who has lost legitimacy in the country, is transitioned out.

How we get there obviously is a source of extraordinary challenge, and we shared ideas in terms of how that can be accomplished.

Sources cited by the Huffington Post suggested that, if the Turkey-Saudi Arabia talks go well, the two countries would move forward with their plans regardless of American support, military or otherwise.

As Grim, Jones, and Schulberg wrote,

The Turks generally support the removal of Assad, but have said that as a non-Arab nation, they are unwilling to take a greater role in Syria without expanded intervention by Saudi Arabia, a Sunni Arab power. Turkey’s leadership has criticized the U.S.-led coalition striking Islamic State targets in Iraq and Syria for its refusal to also go after the Syrian regime.

Saudi Arabia recently demonstrated its willingness to intervene militarily in the region by leading a coalition of Arab nations in launching airstrikes against the Shia Houthi rebels in Yemen. While the U.S. did not participate directly, American officials said the U.S. provided logistical and intelligence support to the mission.

There have been previous indications that Turkey and Saudi Arabia were discussing a cooperative effort in Syria. On March 2, Turkish President Recep Tayyip Erdogan and Saudi Arabia’s King Salman bin Abdul-Aziz Al Saud Salman, met in the Saudi capital of Riyadh, where they announced an agreement to jointly boost aid to the Syrian opposition and broaden overall cooperation on defense and security matters.

The latest news of high-level talks, however, is the first indication of direct military participation against Assad by either country.

Turkey and Saudi Arabia have traditionally found themselves at odds, despite both cooperating with their allies in NATO and the US. This tendency to work together closer and openly, however, has surprised many. As Andrew Korybko writes,

This deadly collaboration proves that the two have temporarily put aside their ideological differences and agreed to sort it out in the aftermath of their unified regime change operation. Furthermore, it highlights that Saudi Arabia is front-and-center in destabilizing the Mideast, and that even Riyadh’s rivals have no choice but to eventually end up collaborating with it in order to pursue what they identify as shared military interests.

Grim, Jones, and Schulberg point out that Turkey has recently taken more open steps indicating that it is preparing to deploy ground troops in Syria. They write that,

Weeks after he met with the Saudi king, the Turkish leader signed a defense deal with Qatar to facilitate intelligence sharing, military cooperation and possible deployment of Turkish and Qatari troops in one another’s countries. This agreement builds upon a joint training deal the two countries signed in 2012, and positions Qatar well to mediate the discussions between Turkey and Saudi Arabia.

Osman Taney Koruturk, the main representative of the leading Turkish opposition Republican People’s Party (CHP) on Turkey’s foreign affairs committee, is concerned that Turkish ground troops could soon be in Syria. He and other opposition members on the committee expressed this concern during official talks over the deal, and later in a press conference after it was signed by the committee on March 2, according to documents obtained by The WorldPost. The deal was then sent to the Parliament and Erdogan to be signed.

At the very least, there has been a clear intensification of death squad activity in Northern Syria in the areas bordering Turkey. This is obviously because of Turkish assistance, training, arming, and funneling of jihadists into Syria through their borders. It is also because the recent strengthening of the alliance between Turkey and Saudi Arabia has resulted in even further alliances between the two interlopers’ proxy forces who often fought separately from one another due to minor differences in religious ideology (at the bottom levels of their fighting forces).

The only reason that these differing terrorist groups cooperate and don’t behead another is because their external patrons are now on the same page in pursuing regime change first and settling intra-jihadist scores second. Specifically, it’s being widely reported that Turkish President Erdogan and new Saudi King Salman agreed to a de-facto alliance over Syria when the former visited the new regent last March, meaning that pro-Muslim Brotherhood groups led by Turkey are fighting alongside Wahhabist ones led by the Saudis, or put another way, that mortal Mideast enemies are now wartime comrades.

The plans to invade Syria directly are no doubt known by the Syrian government. After all, it was an issue that was addressed by Permanent Syrian Representative to the UN Bashar al Jaafari, when he stated on May 4, 2015 that “Any serious attempt to occupy Aleppo will be met with ‘open war’ with the party that it would resort to whether Turkey or any other.”

Indeed, in the last several weeks, geopolitical alliances and talks have begun to coalesce so as to indicate that such an attack is not only possible but probable in the near future. After all, the US and NATO have attempted to gin up support for a direct assault on Syria since early on in the crisis when it became apparent that proxy armies of terrorists alone were not going to accomplish regime change.

The plans – at least from Turkey’s side of the fence – appear to be twofold. First, the plan to attack Syria has been part of the NATO agenda from the moment the death squads were routed by Assad’s forces and Turkey has always been a major playing in this regard.

Secondly, Prime Minister Recep Erdoğan’s own governing party has been suffering under a number of scandals, criticisms, and failures over the last several months and, as is the case in every country, a foreign war is more than helpful in diverting the attention of the local population away from domestic concerns. While certainly not the cause, plunging support from the Turkish public is certainly a stick used to prod Erdoğan into further action.

Interestingly enough, Hurriyet Daily News (a Turkish news agency) recently reported that Turkey has now agreed to allow the United States to use the Incirlik Air Base located in Ankara for alleged “strikes against ISIS.” This move in itself has also served to fuel suspicion that NATO is preparing for an attack on Syria for the purposes of destroying the secular government of Assad or, at the very least, establishing a Buffer Zone.

Turkey is becoming increasingly destabilized due to lack of support for the Islamist and geopolitically foolish Erdogan’s policies as well as an emboldened Kurdish community becoming inspired by more autonomous Kurds in Iraq and Syria while simultaneously being repressed at home.Indeed, the Turkish government appears more and more nervous about the Kurds in its eastern provinces and the possibility that war could break out once again. A Buffer Zone in northern Syria would not only serve to weaken the Assad government but it would also help curb the Kurdish problem (from the point of view of the Turkish government) and the growing Kurdish desire for autonomy.

It remains to be seen how far Turkey will take its latest military operation. However, it is important to remember that, in March, 2014, a YouTube video was released containing the audio of Turkish intelligence Chief Hakan Fidan, Foreign Minister Ahmet Davutoglu, and Deputy Chief of Military Staff Yasar Guler as well as other top Turkish officials discussing a possible attack on Syria. The operation, if implemented, would have been publicly predicated on the basis of “securing the tomb of Suleyman Shah.”

Two weeks prior to the release of the YouTube video, the Turkish government had publicly threatened to respond to any attack on the tomb after a confrontation between fanatical death squads ISIL and other related “rebel” groups in the area.

The audio recording in the leaked video presents Foreign Ministry Under Secretary Feridun Sinirlioglu as stating “An operation against ISIL has international legitimacy. We will define it as al Qaeda. There are no issues on the al Qaeda framework. When it comes to the Suleyman Shah tomb, it’s about the protection of national soil.” Sinirlioglu was referring to the fact that Turkey would be able to invade Syria under the pretext of fighting ISIS and protecting Turkish soil. Soon after the comments were made, Turkey did indeed launch an incursion into Syrian territory on the basis of protecting the tomb from al-Qaeda militants.

Whether or not this military operation is merely an isolated cross-border incident or whether it will turn into a full scale invasion remains to be seen. Regardless, it does not bode well as an omen.

Be the first to comment on "Recent Turkey-Syria Border Clashes A Bad Omen Of Invasion?"