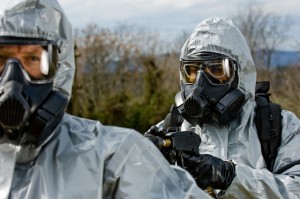 The government of North Korea has leveled accusations that the U.S. is involved in germ warfare research and intends to deploy bacteriological weapons on a large scale. These accusations came in the wake of the recent revelations that the Pentagon mistakenly sent live anthrax to over 65 labs in the United States and also to labs in Japan, South Korea, Australia, Canada and Great Britain.

The Korean National News Agency, in a report published on June 4, 2015, called the anthrax “horrible white powder” which has the killing potential of “95 percent.” The report stated that “the US secretly introduced anthrax germs into south Korea for its experiment to seriously threaten the existence of mankind…” The report also stated that “The above-said anthrax germ experiments in south Korea are heinous war crimes committed pursuant to the U.S. scenario for world domination.”

In a separate release, North Korea called for the responsible American officials to be brought in front of the International Criminal Court.

These statements come on the heels of the recent auction of the Needham Report, published in 1952, which documents the use of biological warfare by the U.S. during the Korean War. This rare copy of the report, officially titled “Report of the International Scientific Commission for the Facts Concerning Bacterial Warfare in Korea and China,” was put up for auction by South Korean filmmaker Lim Jong-Tae, who had stumbled upon it several years ago in a British bookstore.

Prior to his purchase, the Needham Report was considered to have been permanently lost.

According to investigative journalist Jeffrey Kaye, who recently put parts of the Needham Report on his website, “The U.S. collaboration with Japanese war criminals of Unit 731 was formally admitted in 1999 by the U.S. government, though the documentation of that has never been published.”

>Kaye goes on to discuss efforts to debunk the Needham Report by multiple governments, including the U.S. and the U.K. Kaye writes, “The charges of U.S. use of biological weapons during the Korean War are even more incendiary than the now proven claims that the U.S. amnestied Japanese military doctors and others working on biological weapons who experimented on human subjects, and ultimately killed thousands in operational uses of those weapons against China during the Sino-Japanese portion of World War Two. The amnesty was the price paid for U.S. military and intelligence researchers to get access to the trove of research…”

The Needham Report details U.S. bacteriological warfare in Korea and China. According to the Report, U.S. planes sprayed plague-infected fleas in both China and Korea. Insects and spiders carrying anthrax were also dropped in China. Plague-infected voles were parachuted down by U.S. planes in Korea, and cholera-infected clams were dropped on a Korean hillside apparently in an effort to contaminate a nearby drinking water supply.

Testimonies of captured U.S. airmen were also included as buttressing evidence in the report.

WHY IS ANTHRAX BEING MAILED TO SO MANY LABS, ANYWAY?

The recent reports of the Pentagon accidentally mailing live anthrax to 68 labs in 19 states, as well as to the District of Columbia, Japan, South Korea, Britain, Canada and Australia have resulted in a flurry of attention to the methods used to ensure our collective safety from a potential release. Article after article has appeared in the press in the past couple of weeks discussing the methods by which anthrax is killed and how to ensure that an accidental release does not take place again. One question that is not being asked, however, is why the U.S. government is mailing anthrax to so many labs, worldwide.

According to Inbios, a Seattle lab that was named as a recipient of the live anthrax, that lab did not expect to receive anthrax, live or killed. According to personnel at Inbios, the lab had applied for a potential contract involving detection systems. As part of the winnowing out process, the lab was to receive an unspecified agent at which point it could develop the detection system as part of the bidding process. Inbios states it was unaware that the agent they were being mailed was anthrax.

Stanford University was also named as a recipient of the accidental live anthrax mailing.

There are at least four accidents involving accidental release from U.S. labs reported every week.

WHAT ELSE IS BEING MAILED?

According to a recent article published in the Hankyoreh, the U.S. has brought other lethal agents into South Korea without informing its government. The highly dangerous botulinum toxin is also named as an agent brought into South Korea for experiments.

Behind all this activity involving agents for germ warfare in South Korea is JUPITR. JUPITR is an acronym for Joint USFK Portal and Integrated Threat Recognition. According to Peter Emanuel, Bioscience Division Chief for the U.S. Army Edgewood Chemical Biological Center, JUPITR was planned as a military project to enable U.S. forces in South Korea to defend against a germ warfare attack from North Korea.

JUPITR involves state of the art biosurveillance, with environmental detectors as well as mobile labs which can quickly determine if a biological threat is at play. According to a 2014 interview with Emanuel, four different agents are being assessed – anthrax, plague, bacillia and botoxin. It was unclear if these four agents were all sent to South Korea for tests.

One of the consistent problems with determining whether or not an offensive germ warfare program exists is the “dual-use” bugaboo. What this means, in a nutshell, is that in order to create countermeasures, whether they be vaccines or detection systems, one must have the germ itself on hand. This could potentially provide a smokescreen for an offensive biological weapons program.

The U.S. has consistently denied that it was engaged in biological warfare in Korea during the Korean War.

….the U.S. was not serious about conducting any investigation into such charges, despite what the government said publicly. The reason the U.S. didn’t want any investigation was because an “actual investigation” would reveal military operations, “which, if revealed, could do us psychological as well as military damage.

Referencing the recent mailing of live anthrax, Department of Defense spokesperson Col. Warren stated: “We are investigating the inadvertent transfer of live anthrax from a DoD lab from Dugway Proving Ground.” A separate DoD statement said “There is no known risk to the general public, and no personnel have shown any signs of possible exposure.”

The Department of Defense has reported that at least 31 people have been put on post-exposure treatment.

Be the first to comment on "North Korea Blasts U.S. for Germ Warfare Program"