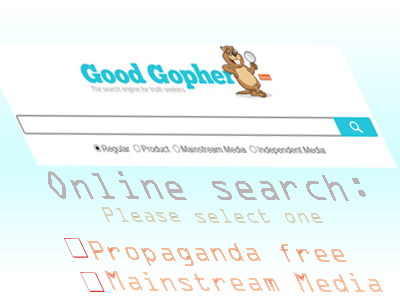 A new search engine GoodGopher.com is now available for the average truth seeker and critical thinker to enjoy a clean, unbiased search of a topic without interference and contamination with CIA’s mainstream media, mental junk food, propaganda “news”. This fresh new approach to searching online for information will now catch news infected with mainstream media and purge it out of the search engine system to keep your news options clear and focused on what actually happened.

If successful, this move takes the concept of online information searching and the information war in a new direction. One in which we have the option to begin to drown out the mental noise that blocks humanity’s progress and one where we continue to create solutions for ourselves to make our lives better. Now is the time to remove government and transnational corporations out of your life as much as possible and ideally even make them obsolete.

GoodGopher.com I believe is an example of a way to start moving in that direction if you haven’t started yet. As mentioned, this search engine will filter out mainstream media propaganda so that you can look at a story without any input from mainstream media. Imagine that!

What I like in particular about this search engine is how mainstream media news is separated from other independent news. Hopefully this will serve as a reminder to everyone that mainstream media news is a unique brand of news not only controlled by the CIA, but it’s a unique circle of only 6 corporations with the exact same interests. This tiny group of corporations eventually will be seen for what they are – a small set of companies with an agenda. Independent media on the other hand is just that, independent and unbiased without ties to political parties, government or preconceived agendas. Hopefully, in time people who are not familiar with this information will begin to see the difference. That alone will be a huge victory for humanity.

Want to start getting a feel for what life is like without the control system’s search engines in place keeping their engineered deceptive paradigm alive and the truth suppressed? Then start using search engines like GoodGopher.com and refer others to the search engine so that they will start to realize that the choice is there. Then hopefully we can some day render powerless the globalist propaganda machines. But we have to start with awareness.

Another important thing you can do to help humanity in this technological information war is to stop using “Google” as a verb. So many people have empowered the transnational globalist anti-humanity organization by using their name as a verb as though “googling” information on the Web is a proper term. There are many solutions being implemented to solve the problems we face today of big government, tyranny, illegal surveillance, corruption, endless war, the police state and more – and this search engine idea along with other search engines committed to protecting your privacy are all a big part of the overall solution.

So help spread the word and start restructuring how you use the Internet. Remember that here in America operation Jade Helm 15 is already underway. The globalists are now officially using their U.S. military to focus on conquering or “mastering” the “human domain” with artificial intelligence led psyops, staged events and false flags. Now is the time to pay attention to events happening, the timing of events and the underlying purpose of events.

Face it, the information war just got a bit more intense and complex and it is up to you to stay awake, stay vigilant and think ahead for the sake of survival. Are you up to it? Can you visualize a world where CIA’s mainstream media is completely irrelevant? A world where the opinions of those still asleep in the matrix are as relevant as the opinion of mentally disturbed hobos roaming the streets? Is this prospect still unimaginable or out of reach to you? Or are you beginning to see the reality of it?

Can you visualize the start of a world where solutions and independently researched developments are the only acceptable pieces of news and where all the sickness that surrounds the government psychiatric control system is only distantly relevant?

Here is something you need to know. In order to get to that place where the control system is irrelevant you’ll have to start somewhere. You will have to reconcile that the old mainstream media paradigm really is over with. You’ll have to truly embrace change … and I mean real change. You’ll have to not just talk about change but actually find ways of implementing it in your life. The change has to happen, even if it’s gradual and slow, at least it’s moving forward. Otherwise you’ll never see change and the controllers will win and suck you into their world of endless war, surveillance, depopulation, Agenda 21, global dictatorship and all.

Now is the time for change in your personal life so that what you implement is eventually manifested at a mass scale. In the past I have written about how to implement changes and actually fight back against the control system while living a busy life, and that’s a wonderful thought. It’s encouraging to know that there are small ways to fight back while working or going to school full-time. This here is just another solution that you can implement at a personal level.

Make a list of some of these changes you can make in your own life to fight back against the control system, then once you officially implement one change then work on the next one and so on. You’ll soon find that a significant part of your life has changed. And this as a whole will help humanity move forward by creating a self-sustaining, open-source interdependent environment where the individual need not look to government or transnational corporations for anything. These control mechanisms will serve only as a laughable source of steady propaganda and disinformation to be ignored by those consciously awakened.