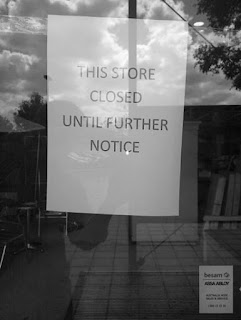 Reduced consumer spending is heralding a looming economic downturn, if not collapse, with an unprecedented shutdown of major box stores, restaurants and grocers underway.

It doesn’t bode well for the millions of Americans who are already seriously struggling, and will only accelerate the death of the middle class.

Along with this massive shrinkage of the retail sector will go thousands of jobs. Natural News reports:

There is chatter across the web about dozens of major retail chains that are expected to permanently shutter a large number of their store locations this year. Popular names like Abercrombie & Fitch, Barnes & Noble, Chico’s, Children’s Place, Coach, Fresh & Easy, Gymboree, JCPenney, Macy’s, Office Depot, Pier One, Pep Boys, and many others are named as soon-to-be casualties in what some news sources are now referring to as the coming “retail apocalypse.”

The Economic Collapse Blog pins 2015 as a significant “turning point” for the U.S. economy, ominously warning that at least 6,000 retail store locations are expected to close this year based on company announcements. Many American consumers are already witnessing the birth pangs of this retail apocalypse as brick-and-mortar department, specialty, and even food shops close their doors for good.

The list of store closures (see here) is truly massive, and in no way accounts for everything that’s coming.

But Americans are still buying one major retail category — technological gadgets like iPhones, wearables, smart devices and computers. As technology purchases soar, shopping malls that have long specialized in clothing and fashion retail are falling in on themselves.

Business Insider calls it a slow and painful death, noting the collapse not only of thousands of stores from dozens of chains, but even the fall of giants like Gap:

Gap once ruled the retail world. But today America’s largest apparel retailer is closing a quarter of its stores and laying off hundreds of workers after disappointing sales.

Gap’s closures are indicative of a larger trend in American retail.

According to National Real Estate Investor, more retailers are planning to close, but are holding on for the end of the holiday shopping season:

After a tsunami of store closing announcements during the first half of the year, experts forecast that the remainder of 2015 will be relatively quiet as retailers focus on getting through the holiday season. However, retailers will continue to shutter stores throughout the year as leases expire.

And the tenants aren’t being replaced by new stores; the retail sector is just shrinking. Business Insider notes:

More than two dozen malls have shut down in the last four years and another 60 malls are on the brink of death, The New York Times reported, citing Green Street Advisors, a real-estate and real-estate investments trust analytics firm.

The elephant in the room in clearly online sales, with major sites like Amazon undercutting and dwarfing brick-and-mortar box stores.

And with online sales impacting on-the-ground retail, local jobs are destroyed as well. The future of retail will be more compacted, less physical and more out of reach for those with shrinking pocketbooks and dwindling means.