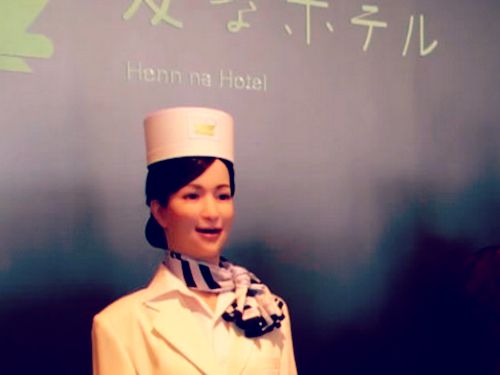 In the coming “smart” future run by artificial intelligence, it has been predicted that robots will begin taking over most of the low- to medium-wage jobs first. Why? Because tech is increasingly cheap and doesn’t require any benefits or lunch breaks.

For example, eight out of the ten jobs that employ the most people in the U.S. and account for about 20% of our current workforce stand a greater than 90% (and in some cases a 98%) estimated chance of being replaced by a robot.

In other words, once the smart grid robo-future is fully instituted, millions across America and the world will likely lose their jobs to robots.

Now the first hotel run almost exclusively by robots has opened up in Japan… specifically to offset labor costs.

While a dino receptionist does the check-in and check-out for English-speaking visitors, a female android resembling a remote ancestor of the robotic servant from the “Humans” TV-series welcomes guests in Japanese. They are accompanied by an automated trolley that takes guests’ luggage to their room. A transparent locker system, called a “robot cloak room,” features a giant industrial-looking robotic arm.

During check-in, visitors still have to type in information on a touch panel screen. They will also have to get used to facial recognition technology replacing standard electronic keys.

The virtual concierge, a doll-like robot with voice recognition, is responsible for reminding guests of breakfast time and scheduled events. Moreover, there is a lamp-sized robot in every room, nicknamed Tuly for its fat, pink tulip shape, which can provide information on time and weather, turn the lights on and off, and even give guests a wake-up call.

Hideo Sawada, owner of the Henn na Hotel specifically said he made this move not because it’s a cool gimmick but in order to save on labor costs and create “the most efficient hotel in the world”.

Welcome to the trendy new future.