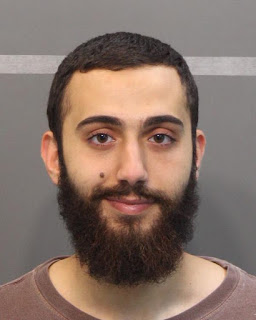 Once again, another convenient shooting has helped supercharge anger, hatred, fear, and division across the Western World after an alleged “Islamist extremist” opened fire on and killed 4 US Marines at a recruiting station in Chattanooga, Tennessee.

Without any knowledge of how the US has in fact created Al Qaeda and its many global affiliates, including vicious terrorist groups plaguing Southeast Asia, and the most notorious to date, the so-called “Islamic State” (ISIS), the American public will predictably react in a manner that will simply further justify America’s meddling across the globe amid its self-created and perpetuated “War on Terror.” It will also help in efforts to further tighten control over the American public itself, with increased justifications for expanding police state measures and future pushes to disarm the American people.

A U.S. official told the Associated Press that Abdulazeez had not been on the radar of federal law enforcement before Thursday’s shooting.

His father had been investigated several years ago for “possible ties to a foreign terrorist organization” and added to the U.S. terrorist watch list, according to a report in the New York Times, but that probe did not surface information about Abdulazeez, the paper said.

This means that yet another case of “domestic terror” has involved someone either investigated by the FBI, entrapped by an active FBI operation where FBI investigators posed as terrorist leaders and walked a patsy through every step of a terrorist attack before arresting them and thus “foiling” the attack, or linked directly to someone the FBI was investigating.

Ironically, the immense omnipresent police state the West has erected to combat the so-called “terrorist” threat, including the total surveillance of all communications online and across all telecommunication networks, at home and abroad under the National Security Agency (NSA) will only expand, despite it once again apparently failing, and despite attempts by special interests on Wall Street and in Washington to claim this latest attack “again” somehow circumvented these already sweeping measures.

And while this latest attack is passed off as a “domestic terrorist attack” and the result of “Islamic extremists,” rather than a false flag event, the US continues to openly support the very “terrorists” it claims threatens its homeland and has inspired these sort of attacks.

Just recently, the Washington Post literally allowed a spokesman of Al Qaeda to defend his faction’s role in the fighting in Syria, and his condemnation of the United States for not rendering more aid for the cause of overrunning and destroying the Syrian nation – a goal the US itself is likewise pursuing.

Stuck inside their own bubble, White House policymakers have allocated millions of U.S. taxpayer dollars to support failed CIA efforts to support so-called “moderate” forces in Syria. But these “moderate” groups have proved to be a disappointment on nearly every count, not least of all in confronting the Islamic State.

That question should prompt Washington to admit that the Islamic State’s extremist ideology can be defeated only through a homegrown Sunni alternative — with the term “moderate” defined not by CIA handlers but by Syrians themselves.

Essentially, the Washington Post afforded a terrorist organization space to make an appeal to the American public for military support. Ahrar al-Sham regularly coordinates with and fights within operations led by Al Qaeda’s Al Nusra Front, a US State Department designated terrorist organization from which ISIS itself sprung.

Al Nusra and Ahrar al-Sham are described as the “closest” of allies by Western think-tanks and media reports. It is also revealed that Ahrar al-Sham worked along side ISIS itself.

Ahrar al-Sham quickly became one of the largest military organizations operating in Syria, and it has been active in efforts to unite the Islamist opposition under a single banner. It rejects the idea of Western intervention but sometimes works alongside Free Syrian Army brigades. It routinely cooperates with al-Nusra and, until relations soured in 2013, also worked with ISIS. In February 2014, the U.S. Director of National Intelligence called Ahrar al-Sham one of the three most effective rebel groups in Syria.

The Washington Post isn’t the only voice in the Western media promoting Al Qaeda. Foreign Policy in 2012 abhorrently proclaimed, “Two Cheers for Syrian Islamists: So the rebels aren’t secular Jeffersonians. As far as America is concerned, it doesn’t much matter.” As much as an admission that the US is backing what is essentially terrorism in Syria, the Foreign Policy article attempted even then to promote the alleged “pragmatism” of supporting Al Qaeda to eliminate America’s foreign enemies.

And while Foreign Policy and terrorists writing in the pages of the Washington Post demand more weapons and support from the West, it is already a documented fact that immense and constantly flowing supply convoys are streaming out of both NATO-member Turkey and US-ally Jordan’s territory, into Syria and Iraq, for the purpose of resupplying ISIS. This explains ISIS’ otherwise inexplicable ability to not only maintain its impressive fighting capacity as it simultaneously wages war against both the Syrian and Iraqi armies, but to expand its fighting to all fronts opposed to US regional hegemony.

This includes Yemen, Libya, and even Egypt where ISIS most recently managed to hit an Egyptian naval vessel with a missile. Foreign Policy would again weigh in. Their article, “Islamic State Sinai Affiliate Claims to Have Hit Egyptian Ship With Missile,” states:

The use of a guided missile to strike an Egyptian ship represents a higher level of technological sophistication than what has been previously observed in Sinai attacks. It is unclear, however, exactly what kind of missile was used in the attack, beyond the militant group’s claim that it was a guided munition.

Militant groups in the region have in the past used guided missiles to attack government ships in the Mediterranean. During the 2006 war between Israel and Hezbollah, an Iranian anti-ship missile fired by the militant group struck the Israeli warship Hanit, badly damaging the vessel and killing four crew members.

Of course, Foreign Policy and others across the Western media will be quick to point out that Hezbollah is a state-sponsored militant organization which receives its weapons from Syria and Iran. The question then becomes how ISIS replicated this level of “technological sophistication,” and which state-sponsors put the missiles into their hands.

The US supporting Al Qaeda is not really news. Al Qaeda was initially a joint US-Saudi venture to create a mercenary army to fight the Soviets in Afghanistan during the 1980s. This mercenary army would again fight Russian interests in Serbia and Chechnya before eventually being used as the pretext for US invasions and occupations of both Afghanistan and Iraq from 2001 onward. In 2007, it was revealed that the US, Saudi Arabia, and Israel sought to use the terrorist organization to raise a proxy military front to overthrow Syria and Iran. The resulting bloodbath in Syria beginning in 2011 is the operational execution of this documented conspiracy.

Al Qaeda and its various affiliates serve both as a proxy mercenary front to strike where Western forces cannot, and a pretext to invade abroad. It also serves as a constant justification for increased tyranny at home. With the most recent shooting carried out by yet another target of the FBI’s “investigations,” and the predictable divisive backlash that will follow, it is assured that the American public will be further blinded to the fact that this so-called “Islamic extremism” was born in Washington and on Wall Street, in Riyadh and Tel Aviv, not in a mosque or springing forth from the pages of the Qu’ran.

In fact, the vast majority of the world’s Islamic people are locked in mortal combat with the West’s mercenary terrorist forces, with tens of thousands of them having shed their blood fighting Al Qaeda everywhere from Libya to Egypt, to Iraq and Syria. While the US attempts to pose as the leading power in the fight against extremism, its token airstrikes deep within Syrian territory are quickly undone by the torrent of supplies it itself oversees flooding into Syrian territory. For every fighter killed by a US airstrike, 10 more are being trafficked in through US and NATO-run networks stretching as far afield as Xinjiang, China.

The US presence in Iraq and Syria serves simply as one of several planned stepping stones to eventually and directly intervene militarily in toppling either or both governments, before moving on to Tehran.

The “War on Terror” is a fraud, and each “terrorist attack” a carefully orchestrated means of further perpetuating that fraud.