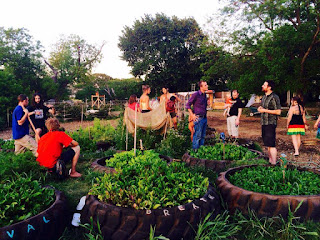 In August of 2013, Bob Tuskin reported on an Arlington, Texas SWAT raid of the Garden of Eden eco-village, a small private community dedicated to sustainability and conscious healing. The community operates an organic farm, as well as offers free food programs and support to individuals who have experienced trauma, addiction, and childhood abuse.

The SWAT raid on the morning of August 2, 2013 resulted in 8 adults being handcuffed at gunpoint, including the mother of a 22 month old and a two-week-old baby who was separated from her children during the raid.

According to a Garden of Eden press release, after hours of being held in handcuffs at gunpoint, a warrant was finally produced which alleged that the community was operating a drug trafficking operation, as well as being considered armed and dangerous.

Community members were subsequently detained inside their home and watched at gunpoint for an additional 8 hours while a significant amount of their property was removed and/or destroyed.

No drugs were ever found and no charges ever resulted from the warrant.

Nearly two years later, Garden of Eden has now initiated a lawsuit against the city of Arlington, Texas.

Their lawsuit cites a number of specific amends to be made by the City aimed at creating a more honorable standard for the whole country, including a budget reveal for this operation and a refund to taxpayers for wasted funds.

In dedication to being an inspired example of how money can benefit the world instead of destroying it, I will donate 100% of all money received from this suit to creating sustainable systems that can feed and house hundreds of people for the rest of their lives for free. We are willing to see this suit through to the very end, even if it takes ten years, all the way to the Supreme Court. We will have justice for the wrongs perpetrated against us by the very public servants who are sworn to protect “we the people” in exercising our Constitutional and God Given rights to life and liberty.

As Garden of Eden also notes, there has been speculation about the true reason for this raid. One is that the City and connected real estate investors desired to use Garden of Eden land along with adjacent land for profitable development, likely related to the City owned and operated Tierra Verde Golf Course, less than one mile from the eco-village.

Another theory is that certain officials were strongly opposed to Garden of Eden’s alternative lifestyle, and they wanted to send a message to the community and a warning to any others considering the same.

Now Garden of Eden is sending their own message to the Police State:  heavy-handed tactics do not intimidate true lovers of freedom; they only provide further motivation to work toward freedom’s preservation.

To follow this developing story, please visit www.intothegardenofeden.com, or connect with the Garden of Eden Facebook Page.