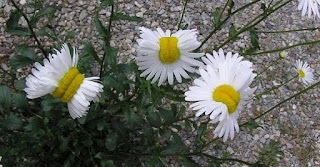 In March 2011, a devastating tsunami struck Japan, causing a meltdown in three of Fukushima’s nuclear reactors. Though it’s generally regarded as the most alarming and destructive nuclear disaster since Chernobyl, mainstream scientists consistently downplay the risk of radiation from the reactors. Meanwhile, troubling mutations and anomalies in the local ecosystem continue to surface.

The latest visual evidence—photographs of mutated daisies going viral on the Web—suggests residual damage that may or may not extend beyond the immediate area. Four years after the disaster, we can now add deformed plant life to the growing list of ecosystem damage.

Twitter user @San_kaido from the city of Nasushiobara, who posted the photo 110 kilometers from Fukushima, describes it in detail:

The right one grew up, split into 2 stems to have 2 flowers connected each other, having 4 stems of flower tied belt-like. The left one has 4 stems grew up to be tied to each other and it had the ring-shaped flower. The atmospheric dose is 0.5 μSv/h at 1m above the ground.

The Internet erupted with reactions to the images. Some people claimed the photos were doctored while several scientists say the abnormalities may be caused by a hormonal imbalance called fasciation — though they stopped short of completely ruling out radiation as the culprit.

These daisies aren’t the first sign of extreme environmental damage. The science magazine Journal of Heredity published a series of articles about the nuclear damage inflicted upon the local biological organisms in the region.

“A growing body of empirical results from studies of birds, monkeys, butterflies, and other insects suggests that some species have been significantly impacted by the radioactive releases related to the Fukushima disaster,” it reported.

Further studies by the group are focusing on possible abnormalities in mitochondrial DNA, which, notably, were one of the tragic results of the infamous 1986 nuclear disaster in Chernobyl, Ukraine.

Other research has focused on “mutant vegetables,” which include “a giant tomato apparently bubbling with tumors, a five-fingered turnip, and two peaches which have grown into figures of eight.”

Additionally, while insects are generally considered resistant to radiation, butterflies aren’t so lucky. For several years, studies conducted by researchers have shown that radionuclides, including iodine-131 and cesium-134/137, are having a measurable effect on the butterflies in the region.

Butterflies netted six months after the release had more than twice as many abnormalities as insects plucked two months following the release, the team found. The rise in mutations means radiation from the accident is still affecting the butterflies’ development, even though levels in the environment have declined.

Despite the aforementioned evidence of widespread genetic abnormalities, the general scientific consensus remains cautiously optimistic that the radiation released from Fukushima is not a danger to animals or humans outside of the immediate affected area.

“Though [cesium] isotopes are elevated 10 to 1,000 [times] over prior levels in waters off Japan, radiation risks due to these radionuclides are below those generally considered harmful to marine animals and human consumers, and even below those from naturally occurring radionuclides,” said marine scientist Ken Buesseler of the Woods Hole Oceanographic Institution.

What do you think? Is radiation from Fukushima an overblown global conspiracy theory? Or is it a legitimate concern for people outside of Japan?

Jake Anderson joined Anti-Media as an independent journalist in April of 2015. His topics of interest include social justice, science, corporatocracy, and dystopian science fiction. He currently resides in Escondido, California. Learn more about Anderson here!

6 Comments on "Did Radiation From Fukushima Create These Mutant Daisies?"