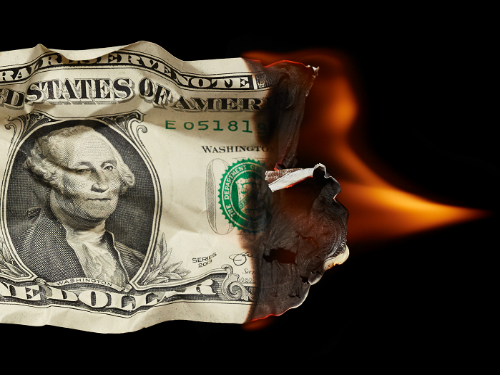 As the situation in Puerto Rico has recently revealed, Greece is not alone. The world is filled with debt-laden nations, many of which may never be able to pay down their liabilities.

All told, the world is $200 trillion in debt, of which $57 trillion was accumulated in the past 8 years. And, for the record, all the wealth in the world, including assets, amounts to $241 trillion (as of 2013). It’s safe to say that the human race is on one massive debt bender, and there won’t be any easy way out.

As for which countries are worse off than others, a recent article from The Guardian happens to reveal which of the world’s nations are on the fast track to a debt crisis. As I read it, however, there was a country that was suspiciously missing from the list. Can you spot this missing debt junky? (Hint: it’s America. The answer is always America.)

New analysis by the Jubilee Debt Campaign reveals that Greece’s plight is far from unique: more than 20 other countries are also wrestling with their own debt crises. Many more, from Senegal to Laos, lie in a debt danger zone, where an economic downturn or a sudden jump in interest rates on world debt markets could lead to disaster…

And, yet, the United States gets a pass. How on Earth did that happen? Currently it’s estimated that the US has the same debt-to-GDP ratio that it had during the middle of World War Two. Not to mention that our unfunded liabilities rest at around $127 trillion and rising.

There’s no way that we will ever pay that off, which means that the United States, while perhaps not in the same boat as Greece, is definitely in the same fleet. Our debt-to-GDP ratio may not be the worst, but that debt is larger than any other in human history. And, unlike Greece, our economy is more connected and codependent on the global economy than any other. Once we go down, we’re taking the whole world down with us.

You’d think we’d be worth mentioning, but I guess our debt is a hard pill to swallow.

3 Comments on "Debt Crisis Central: Let’s Not Forget About America"