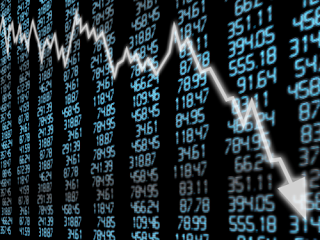 Just last month, Chinese stocks were on one hell of a hot streak. The Shenzhen and Shanghai stock exchanges had risen to unprecedented heights, and were worth a total of $10 trillion.

But by early July, their value had plummeted by a whopping 30% in a very short time frame.

The Chinese government stepped in with several market controls to stabilize their stocks, which actually succeeded for a while. The government worked with several top financial firms to buy $20 billion in stocks, and over 1,400 companies were allowed to suspend the trading of their shares, among many other measures.

However, they just found out the hard way, that you can’t really plug a sinking ship.

The Shanghai Composite index fell 8.5pc despite emergency measures to shore up the market, with a roster of the biggest blue-chip companies down by the maximum daily limit of 10pc. The mood was further soured by news that corporated profits in China are now contracting in absolute terms, falling 0.3pc over the past year.

The violence of the moves unnerved investors worldwide, stirring fears that the Communist Party may be losing control after stoking a series of epic bubbles in property, corporate investment and equities to keep up the blistering pace of economic growth.

In all honesty, this was entirely predictable. I described how well this strategy would work on July 7th when the Communist party first decided to dump money into their stock market, in the hopes that this would stop its precipitous decline.

What’s worse, is how financial institutions in China are reacting to the healthy dose of realism that their stock market so desperately needed. The country’s top stock brokerages decided to collectively buy almost $20 billion in stocks to help stabilize the market, part of which was supplied by the government. You might recognize this as the award winning strategy that was employed by several top financial firms in the US, just after the market crash of 1929. The Great Depression quickly followed.

Of course, anyone could have predicted that. While a depression has yet to develop in China, their stocks are falling despite the best efforts of their government and other major financial institutions (which are really just an extension of the Communist Party). There is a clear historical precedent for this sort of thing. Once a bubble pops, pumping more air into it will never blow it back up. The best you can do is blow more bubbles into other sectors of the economy, which is exactly what China has been doing for years to stave off a genuine correction in their markets.

You might notice that this is the same strategy employed by America’s financial elite. We’ve managed to keep our economy afloat for decades by bouncing from one economic bubble to the next, accumulating more and more debt along the way. But at the end of the day, that can’t work forever. There needs to be a correction at some point, and the longer they wait, the worse it will be when it finally comes crashing down. And that day seems to be long overdue for the likes of China, the US, and the rest of the world.