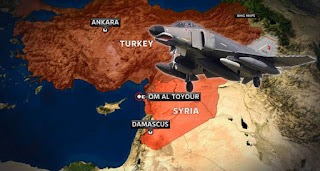 As the NATO Article 4 meeting concludes with little or no fanfare and no major decisions made regarding a “no-fly zone” over Syria, many onlookers may take the opportunity to sit back in satisfaction that the meeting was concluded without any announcement of further direct military involvement in Syrian affairs. For many, the lackluster meeting was simply more proof that Turkey and the United States will not attempt a frontal assault on the Middle Eastern country.

Unfortunately, however, the big decision was not made at the NATO Article 4 meeting, it was made bilaterally days before between Turkey and the United States.

The new agreement effectively creates a “buffer zone” that will span from the Turkish border line into Syria. It will extend from Azaz in the East to Jarablus in the West and as far south as al-Bab. The width of the zone would be about 68 miles and would extend around 40 miles deep into Syria, right on the doorstep of Aleppo.

The zone will be much smaller than that which Turkey and the United States have been calling for over the last few years and will not even stretch the length of the Turkey-Syria border. But it is a start.

True to form, the US and Turkey are attempting to obfuscate the fact that their new agreement is the creation of a no-fly zone by renaming it an “ISIL-free zone.” This is the same tactic used when the term “no-fly zone” and “buffer zone” began to draw too much ire from observers only a year ago. Then, the term became “safe zone.” Now, the NATO powers are playing semantics yet again and deeming the area an “ISIL-free zone” as if it were merely the unveiling of a new soda minus a crucial ingredient.


The description of the “ISIL-free zone” is that it will be a distinguished area in which the Turkish and U.S. military will engage in aggressive operations against ISIS. It is said that this area will also function as a place where civilians displaced by the Syrian crisis may run to for safe haven and where “moderate rebel” forces can maintain a higher presence free from the battles with ISIS.

“Once the area is cleared, the plan is to give control to as-yet-unidentified moderate Syrian rebel groups. The United States and Turkey have differing interpretations as to which groups can be defined as ‘moderate,’” the Washington Post reports.

The reality, however, is that the “ISIL-free zone” will be nothing more than a Forward Operating Base deeper into Syrian territory, working under the direct protection of the U.S. military and Turkish air force.

If the answer to either of these questions is “yes,” the “ISIL-free zone” is actually a “no-fly zone.” After all, the Syrian military is the only party in the Syrian crisis that maintains and uses an air force.

It must also be pointed out that the justifications on which the ISIL-free zone are based are nothing than myths.

First, the idea that there is even such a thing as a “moderate rebel force” operating inside Syria has been debunked time and time again. From the beginning, there were no moderate forces fighting against the secular government of Bashar al-Assad. The alleged opposition was nothing more than death squads, jihadists, snipers, and terrorists – a presentation the West attempted to maintain until images of beheadings, torture, and cannibalism were too numerous to control any longer.

ISIS was never a truly separate force from the cannibals operating in Syria since the beginning of the crisis. It was always on the ground in Syria, going by the name of Jobhat al-Nusra or al-Qaeda, the Free Syrian Army, Yarmouk Brigade, or Harakat Hazm. The name ISIS is truly nothing more than a name.

It has, however, been immensely successful at drumming up American fear and support of military adventures abroad. Unfortunately, with just the right amount of propaganda, Western audiences are easily convinced of just about anything.

The second myth is that there is a war on ISIS being conducted by the U.S. coalition and Turkey. For two countries opposed to ISIS, one would easily be convinced of the opposite after examining the facts on the ground. Turkey has long acted as a funnel and a conduit for ISIS crossing into Syria, and the United States can be credited with the creation of the terrorist organization entirely. With aid being provided to so-called moderate rebels, the U.S. and Turkey have directly armed ISIS, funded them, and provided them with the necessary logistics and intelligence to conduct successful attacks in Iraq and Syria.

U.S. airstrikes allegedly against ISIS in Iraq and Syria have likewise been questionable at best. U.S. airstrikes have largely targeted Syrian infrastructure, civilian areas, and Syrian food storage facilities. American airpower has been notorious for dropping supplies to ISIS and firing on the Iraqi military. In instances where the U.S. has targeted ISIS, it has largely been an effort of “death squad herding,” border shaping, or protection of Western oil fields from terrorist brigades who may have briefly gotten off the reservation.

Even the idea of a “Buffer Zone” has been in the cards since the beginning of the Syrian crisis. Both the United States and Turkey have long argued for the creation of a “no-fly zone,” with Turkey renewing its calls for such a zone on an almost weekly basis. Indeed, the infamous military-industrial complex “think tank” The Brookings Institution has provided detailed propositions for the creation of “buffer zones” and a “multi-front war” for the ultimate purposes of destroying the secular government of Bashar al-Assad.

Regardless, the Anglo-American powers are successfully using semantics yet again to achieve a goal that was unpalatable to the public when different words were originally used. Unfortunately, the change from “no-fly zone” to “ISIL-free zone” will be an effective mechanism to ensure that the small portion of the American public attempting to follow current affairs support the new U.S. moves in Syria.

While the overwhelming majority of Western audiences tuned in and dropped out a long time ago, it will unfortunately be the Syrian people who pay the price for their absence.