On September 29th 2011, a group of masked men burst into the Paseo Boricua Grocery & Deli in Chicago.

Witnesses say they initially thought it was a robbery. It turned out to be the police showing up to kidnap five men taking them to the secret detention warehouse known as Homan Square, a facility just publicly uncovered last week that sparked a protests in Chicago and nationwide.

John Vergara, an art teacher, who was taken to Homan Square in this incident said:

At first I thought it was a robbery. I didn’t know it was the police until the sergeant walked in.

The cops had machine guns, according to Jose Garcia, one of the other men dragged into Homan Square. In his interview with The Guardian he claims:

They all had masks, all of them. They looked like Isis – put it that way.

So John Vergara and Jose Garcia were taken to Homan Square with the deli manager and 2 others; they were detained for about 9 hours. They were, of course, denied access to a phone call, a lawyer, or any form of due process.


If you were unaware, Homan Square is a secret prison where people have been tortured and killed by the Chicago police, bringing up images of Guantanamo Bay in the minds of many. After the powerful revelation, the Twitter storm #Gitmo2Chicago not only trended on its intended platform, but it trended on Facebook as well. In addition to the storm, a protest of about 200 people occurred right outside the facility.

During their incarceration, police tried for hours to get them to falsely confess to crimes until one of the incarcerated men name-dropped a particularly good Chicago lawyer. They were then released on the condition that they never speak of what happened at Homan Square. Garcia:

We’re in an abandoned building, we’re freaking out, we’re seeing these guys with masks coming in and out, and John is telling them they’re bogus, ‘You guys are doing this illegally,’ and this and this and this.

Then they came back and all of a sudden they seemed scared.

I pretty much was kidnapped.

I did not have any idea where I was. I didn’t even know about that building until that day.

Referring to his employer who was falsely targeted by police, Garcia said

This guy’s never been in trouble, and the next thing you know, they come out with drugs [charges]. We’re like: ‘What?’

An original article from The Guardian about the incident said:

Unlike the seven other people held at Homan Square interviewed by the Guardian, Garcia and Vergara said all five of them were held in the same room. It was no ordinary cell: three sides of it were concrete and the fourth, containing a door, was metal-link fencing – reminiscent of the “cages” described by Homan Square arrestees Brock Terry and David Smith, as well as former police superintendent Richard Brzeczek.

Vergara says he was handcuffed to a metal bar by one hand and an elderly customer from the deli’s hospital bracelet by the other hand in a cage-like area he drew in the picture below. 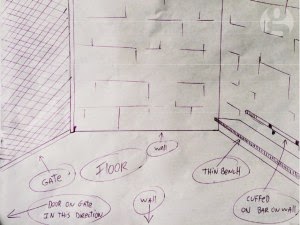 We were cuffed to each other and to the bar,

They thought I was a threat because of my size. I was like, ‘Dude, you don’t have to put me like I’m an animal.’

Vergara remembered what the police threatened him with:

So when Vergara mentioned the name of lawyer Blake Horowitz, he recalled:

When I mentioned his name, the whole game changed.

“Humboldt Park, everybody could be a paralegal there. That’s how much they fuck with you, the police. We know the ins and outs,” and “They probably thought we was some dumbass Ricans or whatever, we don’t know shit. So when we start spitting out some of this paralegal stuff we know – oh, shit, damn.”

Vergara paraphrased the deal eventually offered to him by a police sergeant:

I said, ‘John, look, bro, just tell them anything so we can get the fuck out of here.’

About an hour later, he came back and they uncuffed us all.

Police drove them back to the deli – all, that is, except Calderon, who was taken to Central Male Lockup on 26th Street and California Avenue and charged with possession with intent to distribute cocaine.

Calderon eventually took a plea deal; he may have falsely confessed.

Vergara has shown the public that the Chicago police department can kidnap and secretly interrogate people for having done nothing more than get a cup of coffee at the wrong restaurant at the wrong time.

“I seen that, and I’m saying to myself, Chicago police officer? Wait a minute, those sons of bitches – that’s how they did us,” and ‘I said to myself, that’s how those fuckers did us, that same shit, that Guantánamo Bay shit.” “It was like we were terrorists, you know what I’m saying? Off some petty shit.“

The Homan Square revelation was a turning point in the movement to oppose the police state; the revelations about this continue coming and they have extreme implications. Protesters of Homan Square have specifically expressed concern for the police’s ability to legally detain and kill anyone they want with no due process. All made possible by the NDAA (National Defense Authorization Act).

Another protest is coming to Homan Square this Saturday along with another Twitter storm to spread the word about Homan Square. The last one was enormously successful.

You can participate in the Twitter/Facebook hashtag storm by posting as much as you’d like informing people of this facility with the hashtag #Gitmo2Chicago.

It truly is effective. If you ask people how they heard about Homan Square, you may be surprised to learn that several people discovered it from the Twitter storm. It’s the very least you can do if you cannot show up to the Shut Down Homan Square protest in person.

Please share this with beyond as many people as possible.

This is the perfect issue to bring together activists and concerned citizens of all kinds; this is your opportunity to exercise your ability to spread information. It’s time to organize as people to fight back against pure tyranny and abuse of power.

This can’t continue. Let’s actually do something about this.