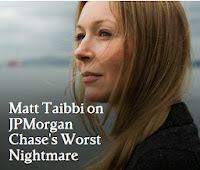 The attention that Matt Taibbi is receiving for the Rolling Stone essay, The $9 Billion Witness: Meet JPMorgan Chase’s Worst Nightmare, may push forward a serious debate on the systemic corruption that is common knowledge among informed observers of the financial structure.

In reality, there is nothing surprising in Matt Taibbi’s latest piece since returning to Rolling Stone from the Intercept, as it tells a story everyone is by now is all too familiar with: a former bank employee (in this case Alayne Fleischmann) who was a worker in a bank’s (in this case JPM) mortgage operations group, where she observed and engaged in what she describes as “massive criminal securities fraud” and who was fired after trying to bring the attention of those above her to said “criminal” activity.

The story doesn’t end there, and as Carmen Segarra already showed, when she revealed that Goldman runs the NY Fed, once Alayne was let go and tried to “whistleblow” on the house of Jimon from the outside, she found the that US Department of Justice headed by Eric Holder is just as, if not more, corrupt, and in his desperate attempt to prevent discovery and bring JPM et al to justice, he would stretch the statue of limitations on frauds committed during the crisis long enough to where nobody had any legal recourse any more, up to and including the US taxpayer.”

Well, that is a sober and tragic assessment. Even more heartbreaking is the statement made by Ms. Fleischmann as reported in Straight Line Logic.

And now, with Holder about to leave office and his Justice Department reportedly wrapping up its final settlements, the state is effectively putting the finishing touches on what will amount to a sweeping, industrywide effort to bury the facts of a whole generation of Wall Street corruption. “I could be sued into bankruptcy,” she says. “I could lose my license to practice law. I could lose everything. But if we don’t start speaking up, then this really is all we’re going to get: the biggest financial cover-up in history.

The only coherent response that regular citizens can exert, when dealing with the mega financial houses, is to avoid entanglements whenever possible. What good is it to establish accounts, whether as loans, savings or investments, when the rules of survival are stacked against main street customers?

Firms like JP Morgan or Goldman are not terrified by fines because they are protected by the “Too Big To Fail” culture. Bailouts are a way of life and infusion of easy money into the liquidity flow of balance sheets employs the most creative accounting techniques to cover up accurate net worth.

The threat of principals actually doing jail time is so remote that the probability is far greater that the next Secretary of the Treasury will come from their ranks.

This plight produces a true dilemma of confidence. In this environment only brave souls dare become a whistleblower. Public support for such individuals like Fleischmann and Segarra is faint because neither are public persons, readily recognized by most people. This lack of notoriety as individuals is far less important than the criminal activity both are documenting.

However, in a media driven and social networking society, the personality of celebrity far outpaces the substance of the offenses. Matt Taibbi’s star persona, deserved or manufactured, illustrates that getting attention through the clutter and noise of the sound bites is possible. For an unknown person, getting your 15 minutes of fame requires even more creative strategies, to expose the basic purpose in the news revelations.

The dying mainstream presstitutes will not confront the intrinsic nature of the abuses because their own financial futures depend upon Wall Street support. Yet, struggling Middle America foolishly relies upon their reporting and advice in most financial matters.

JPMorgan Chase’s Worst Nightmare fundamentally is the unwinding of the derivative debt black hole of their making. The essential risk of a collapse and implosion of the financial manipulated markets only grows because no effort or willingness exists to purge the system of crooked companies, practices or individuals. The culture of corruption survives because the pattern of exposing and demanding justice is so brutally punished.

How can meaningful accountability come from internal reform, when the price of disclosure is the end of your professional endeavors and even your livelihood?

Arguments, data and evidence of generational embedded fraud have been made by some of the most intuitive minds on finance and economics. Nonetheless, the degeneracy accelerates. The wolves of Wall Street target their prey when they lobby regulators to allow for more exotic financial products that are designed to fleece the public and place the entire monetary system in greater jeopardy.

Activists rally during elections cycles to pressure the establishment. The Occupy Wall Street movement, misguided on potential solutions, did muster awareness with media exposure. However, most taxpayers do not exert sufficient outrage about the selling out of their financial security.

Stopping “massive criminal securities fraud” is a true national security requirement. Internet revelations can only expose the latest schemes. As stated in the essay, Repeal of Glass-Steagall and the Too Big To Fail Culture, is a major reason for the current unsustainable breakdown in trust and lack of liability consequences for financial institutions.

Take the opportunity of the Alayne Fleischmann disclosures to demand that your newly elected representatives exert the courage to advance a national debate on a major overhaul of the ground rules for Wall Street.

While the prospects are slim that any constructive and critical legislation will come out of the new Congress, public indignation needs to grow and intensify. The battle for economic viability and preservation of capital is being lost for ordinary citizens. An angry constituency is necessary to confront the outrageous abuses that pass as normal conduct. The sacrifices of Alayne Fleischmann and Carmen Segarra need not be in vain. Mobilize for action; boycott the big banks and security fraudsters.