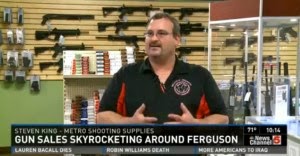 Fear of the possible unrest which may result from the St. Louis grand jury decision on Darren Wilson’s fate has driven the residents of Ferguson, MO and nearby towns to arm themselves with firearms.

Steven King, owner of Metro Shooting supplies located right outside of Ferguson, told CNN on Monday that sales in the last week or so have skyrocketed.

“In August gun sales went up exponentially, not only at our store but around the entire St. Louis metropolitan area. It kinda tapered off for the last couple of months and now in the last week or so sales have started to skyrocket once again,” King explained.

When asked who was buying firearms and why, King said..

Well we have a wide variety of people purchasing firearms right now, we’ve got many first time buyers, we’ve got elderly people, we’ve got white, black, Asian, we’ve got women, men, head of households. But primarily we’ve got, 100%, this weekend, 100% of the people that have bought a firearm have bought it because of some sort of fear of the unknown, whats going to happen this week or so with the Ferguson verdict.

King goes on to explain that residents are preparing to protect themselves form the looting and rioting of the likes that took place in August right after the shooting of Michael Brown.

John Stephenson, a manger of a different gun shop near Ferguson also says that sales of firearms for personal protection are on the rise, having shot up 50%.

Stephenson believes that undoubtedly the spike in sales is a result of the Michael Brown shooting and the ensuing unrest.

The St. Louis County Prosecutor’s Office has said the verdict in Darren Wilson’s case is expected in the middle of November as the grand jury is continuing to pour over evidence of the racially charged case.

The preparation on behalf of Ferguson residents and those in neighboring towns is a move which mirrors actions of St. Louis law enforcement who have spent more than $100,000 stocking up on body armor, tear gas, handcuffs and other crowd control items since August.