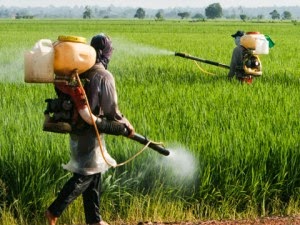 Sri Lanka has decided to completely ban glyphosate from their country; it’s the active ingredient in Monsanto’s Roundup herbicide. In doing so they join a growing list of countries that have/are doing the same. The ban comes out of concern that the chemical may be linked to a fatal kidney disease that could kill agricultural workers. Glyphosate was patented as a herbicide by Monsanto in the early 1970s, and it is the most widely used herbicide in the world.

A chronic kidney disease has been affecting poor farming regions all over the world, and a new study that was published in the International Journal of Environmental Research and Public Health suggests that Roundup, or glyphosate, becomes highly toxic to the kidney once mixed with “hard” water or metals like cadmium and arsenic. These metals often exist naturally in the soil or are added via the fertilizer.(0)(6)

An investigation carried out by medical specialists and scientists has revealed that kidney disease was mainly caused by glyphosate. President Mahinda Rajapaksa has ordered the immediate removal of glyphosate from the local market soon after he was told of the contents of the report. (8)

The new study also noted that even the World Health Organization (WHO) found that Chronic Kidney Disease (CKDU) is caused by exposure to pesticides.

Researchers point out that political changes in Sri Lanka in the late 1970s led to the introduction of agrochemicals, especially in rice farming. They believe that 12 to 15 years of exposure to “low concentration kidney-damaging compounds” along with their accumulation in the body led to the appearance of CKDU in the mid-90s. (7)


When you ingest Roundup, or glyphosate, you are altering the chemistry of your body. It’s unnatural, and the body doesn’t resonate with it. Scientists have demonstrated that glyphosate interrupts the CYP pathway. CYP enzymes have many important functions. They are critical for normal, natural functioning of multiple biological systems within our bodies. Because humans that’ve been exposed to glyphosate have a drop in amino acid tryptophan levels, they do not have the necessary active signalling of the neurotransmitter serotonin, which is associated with weight gain, depression, Parkinson’s and Alzheimer’s disease. (1)

Another report linked glyphosate to birth defects. The report provides a comprehensive review of the peer-reviewed scientific literature documenting the serious health hazards posed by glyphosate and roundup herbicide formulations.(2)(3)

Our examination of the evidence leads us to the conclusion that the current approval of glyphosate and Roundup is deeply flawed and unreliable. In this report, we examine the industry studies and regulatory documents that led to the approval of glyphosate. We show that industry and regulators knew as long ago as the 1980′s and 1990′s that glyphosate causes malformation, but that information was not made public. We demonstrate how EU regulators reasoned their way from clear evidence of glyphosate’s teratogenicity in industry’s own studies to a conclusion that minimized these findings in the EU Commission’s final review report. (2)(3)

Studies have also linked glyphosate to cancer, in that it is a potential endocrine disruptor. Endocrine disruptors are chemicals that can interfere with the hormone system in mammals. These disruptors can cause developmental disorders, birth defects and cancer tumors. (4)

Many countries around the world have completely banned GMOs and the pesticides that go along with them. This has been a growing trend within the past few years and will continue to move forward as the world continues to wake up. No matter the justification, herbicides make absolutely no sense.