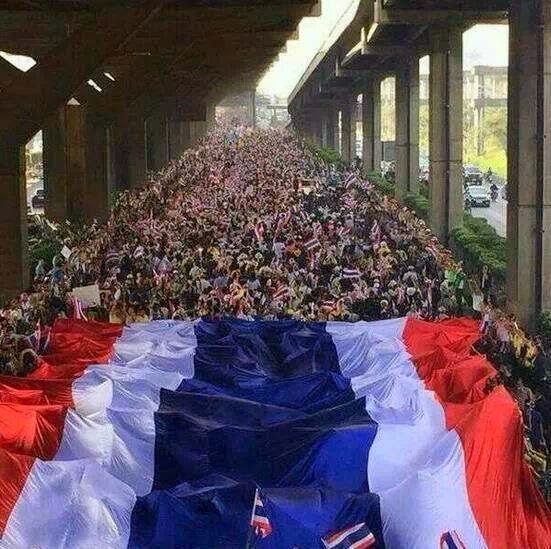 Protesters in Thailand’s capital of Bangkok are planning another mass march this Saturday in opposition of convicted criminal, fugitive, accused mass murderer, billionaire, autocrat Thaksin Shinawatra and his proxy regime. Protesters have been carrying out demonstrations continuously since late October 2013, including a lengthy “Occupy Bangkok” campaign preceding sham elections that saw 7 massive encampments across the city bring its major avenues to a standstill for weeks.

The elections resulted in an unprecedented nationwide boycott of the polls, where over half of all eligible Thai voters refused to cast their ballots. Of those that did, many chose to deface their ballots or mark “no vote” in protest of both the regime and the democratic process it has hijacked and hidden behind now for nearly a year of political division and national instability.

What Did Thaksin Shinawatra Do? What Have His “Red Shirt” Followers Done?

In addition to carrying out armed insurrection in both 2009 and 2010, Thaksin’s “red shirts” have carried out a campaign of violence, terror, and intimidation designed to keep Thailand’s “silent majority,” silent for years: Image: While the regime and its Western backers claim violence in 2010 was the result of a brutal, unprovoked military crackdown on “unarmed” protesters, in reality Thaksin Shinawatra deployed some 300 armed mercenaries onto the streets to augment his “red shirt” supporters. Weeks of gun battles involving the above pictured “men in black,” would result in 92 deaths. Why Are Elections Currently Impossible?

The regime and its Western backers insist that the solution to the current political impasse is an election. Of course, this is impossible because the current regime is openly run by Thaksin Shinawatra, a convicted criminal and fugitive who was neither on the ballot nor even in the country during last elections, and will simply resume control of the nation after any future election in which his proxy party wins.

While Thailand is technically under the premiership of Thaksin’s sister, Yingluck Shinawatra, by his party’s own admission, Thaksin is still literally running the country. The election campaign slogan for the last general election in 2011 was literally, “Thaksin Thinks, Puea Thai Does,” Puea Thai being his political party. Forbes would report in their article, “Thaksin in Exile: Advising Sister, Digging for Gold,” that:

Regarding his behind-the-scenes role in the party and policy, he is not shy: “I am the one who thinks. Like our slogan during the campaign, Thaksin thinks, Pheu Thai acts.”

The New York Times admitted in an early 2013 article titled, “In Thailand, Power Comes With Help From Skype,” that:

The NYT piece would also report:

“He’s the one who formulates the Pheu Thai policies,” said Noppadon Pattama, a senior official in Mr. Thaksin’s party who also serves as his personal lawyer. “Almost all the policies put forward during the last election came from him.” Image: The New York Times openly admits that Thailand is currently run by unelected convicted criminal/fugitive Thaksin Shinawatra. Clearly any proxy government or elections in which it participates in are illegitimate by both Thai and international standards. Thaksin’s foreign ties are what have afforded him impunity regarding an otherwise cartoonish, 3rd world dictatorship.

There is no question that an accused mass murderer and convicted criminal hiding abroad from a 2 year jail sentence, multiple arrest warrants, and a long list of pending court cases, is illegally running Thailand by proxy. Being unelected, Thaksin Shinawatra is by all accounts a dictator, and his “government” a regime, however cleverly they try to dress it up.

Elections in any other country featuring a convicted criminal openly running a contending party would be unacceptable – and in Thailand as well, they are equally unacceptable until after reforms that prevent such a scenario from occurring again. The Illusion of Thaksin Shinawatra’s “Popularity”

While the regime and its Western backers continue to claim they represent the majority of Thai people, it should be remembered that the final tally conducted in 2011 by Thailand’s Election Commission showed that Thaksin Shinawatra’s proxy political party received 15.7 million votes out of the estimated 32.5 million voter turnout (turnout of approx. 74%). This gave Thaksin’s proxy party a mere 48% of those who cast their votes on July 3rd (not even half), and out of all eligible voters, only a 35% mandate to actually “lead” the country.

In a 2010 Asian Foundation report titled, “Survey Findings Challenge Notion of a Divided Thailand,” it was revealed that a meager 7% of Thailand’s population identify themselves as being “red,” with another 7% describing themselves as “leaning toward red.” The survey also revealed that by far, most Thais constitute what is called the “silent majority.” The survey included multiple questions that explained the leanings of this silent majority.

For instance, regarding violence that erupted when Thaksin Shinawatra attempted to seize back power in 2010 with large street mobs augmented by armed mercenaries, only 37% blamed the government, 40% squarely blamed Thaksin, 4% held both sides responsible, and the remaining 19% weren’t sure. 62% found the army (which ousted Thaksin in 2006, and restored order in Bangkok both in 2009 and 2010 after pro-Thaksin mobs turned violent) as an important independent institution that has helped safeguard and stabilize the country. Graph: Up from 62% the year before, the public perception of the military as an important independent institution stood at 63%. Even in in the regime’s rural strongholds, support stood at 61%. The only group that did not support the military, was the regime’s tiny “red” minority, but even among them, 30% still supported the army. With only 7% of the population identifying themselves as “red,” the illusion of Thaksin Shinawatra’s popularity crumbles under statistical scrutiny.

Toward the End Game

Peaceful protesters will continue to defy the illegitimate proxy regime of Thaksin Shinawatra until it crumbles under a withering undermining of its authority, legitimacy, and operational capacity to administer the country. The regime is expected to continue its use of violence and terrorism in attempt to intimidate protesters, but its fear of spurring the military to intervene means that it most likely will never be able to muster enough force to break the growing momentum of dissent against them.

For now, protesters are well entrenched in the streets and can easily continue to remain there for months to come. There is a golden opportunity for the protesters to form a “shadow government” to begin administering areas they have now retaken from the regime. Administering these areas publicly and attending to the needs of businesses and residents who may be affected by the protests would further undermine the legitimacy and credibility of the current regime – who already spends much of its time hundreds of miles to the north in the Thai city of Chiang Mai.

As reported many times before, current anti-regime protesters are not trying to end “democracy.” They are simply trying to end the abuse of the democratic process by an overt criminal. Elections must be carried only after Thaksin Shinawatra and his entire political machine have been safely and completely dismantled.

Be the first to comment on "Thailand: Mass Mobilization This Saturday – March 29, 2014"