At the federal level, the illusion of representative government is now over. With a few exceptions, for-profit interests have colonized government systems that were originally intended to serve people.

The danger of allowing this virus to continue, of course, is that the casualty always eventually becomes life itself. Like any virus.

Presented to you is Exhibit A: chief telecom industry lobbyist Tom Wheeler now chairs the FCC. This is yet another FDA-Monsanto-esque revolving door of corruption, which sidelines the rights and safety of an entire nation. 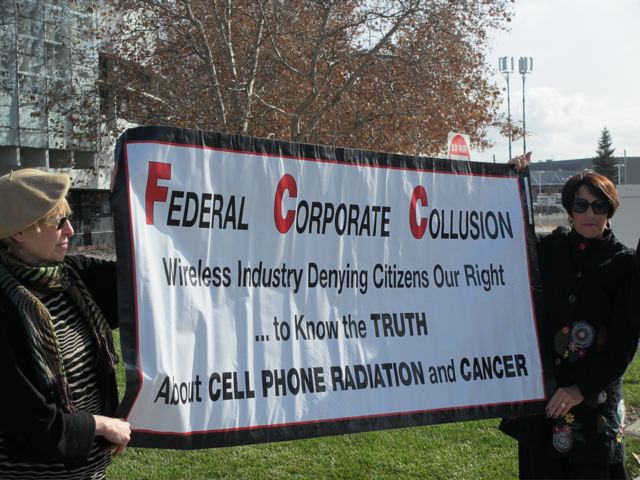 Activists rallied to call out FCC chair Tom Wheeler on January 9 in San Francisco,
and will be directly addressing the CPUC on January 16.

All of the senators in the Commerce Committee know Tom as a lobbyist who funnels funds to them, not as a stand-up guy from a regulatory agency who is able to take heat.

Wheeler’s career has been dedicated to obsessively expanding the telecom industry to what it is now: an uncontrollable behemoth in league with the NSA and its ilk. And a facade which intentionally suppresses an avalanche of scientific evidence for the harm it is causing.

According to thousands of scientific studies, the inescapable truth is that Big Telecom’s cell phones, towers, and the offshoot “smart” networks which have spawned and are spidering throughout neighborhoods in the Western world are harming all biological life – from the whole being down to the cellular level.

From brain tumors to DNA damage to functional impairments such as tinnitus and insomnia. And from bees losing their homing ability to trees prematurely dying. This is the conclusion presented from, literally, thousands of peer-reviewed studies.

View a Take Back Your Power clip, exposing what utilities
are not telling about health risks from ‘smart’ meters.

Despite the unconscionable practice by Wheeler’s wireless industry to systematically cover all this up, skew the science, invent fake studies and oppress dissident researchers, the truth is becoming obvious. Or maybe not, if you’re one of perhaps several million who have had symptoms after having a “smart” meter installed – such as inability to sleep, increasingly foggy thinking, ringing in the ears, headaches or heart palpitations – but haven’t connected the dots as to the cause.

Last Thursday, activists brazenly called Wheeler out during his recent visit to San Francisco. And this coming Thursday, they will face down corrupted power brokers at the California Public Utilities Commission.

The so-called “smart” grid infrastructure facilitates unprecedented illegal data-mining by utilities and government, made complete with utility meters that enable their colonization of your home. (The CPUC has admitted plans to take the detailed in-home data harvested by “smart” meters, and sell it on the open market. And the US Government and Department of Justice have done a secret deal which facilitates the sharing of data harvested from “smart” grids, exempting utilities and other industries of any wrongdoing. Note: There is no requirement to allow a “smart” meter on your home. See the resources at bottom and contact your utility.)

These facts make it clear there is much at stake for our civilization, and this needs to be spoken of openly, stripped of propaganda. The movement at present is teetering on the edge of mainstream awareness. The handicap we face: It’s hard for people to conceive that industry and government can be this corrupt – that this could actually be happening. But unfortunately, it is.
Of course, all of this is illegal. And it’s based on baldfaced lies, misinformation and propaganda. The show has been taken over. There is no oversight left in town. No agency or department within this broken-down system is coming to our rescue.

Corruption has no capability to auto-correct. Intervention is required.

When wrongs are pressed because it is believed they will be borne, resistance becomes morality. – Thomas Jefferson

The global power-grab charade will continue until we realize the power to change and to create is in us. We have the rights – innate in our very existence – and we have been giving them away.We have allowed ourselves to be hypnotically seduced by un-conscious propaganda designed to have us gratify ourselves, not take responsibility, not challenge so-called authority, and generally be a technologized lemmings. These are programs of self-imposed limitation and of fear; catching the human race off-guard and hijacking thought.

In the film After Earth, Cypher Raige (played by Will Smith) succinctly put it this way:

Fear is not real. It is a product of thoughts you create. Do not misunderstand me. Danger is very real. But fear is a choice.

Remember this: to whatever one fears, one’s power follows. If we are fearing repercussions of speaking truth, or being on some corporate agency’s watch list, or being a social “weirdo” – then it’s not us who’s really living. It’s a conditioning program which we’ve allowed to call the shots.

All of this may seem like fiction-come-to-life – and perhaps it is. This global play is run by kids with magnifying glasses and anthills. They just never grew up.

But there’s now an open casting call out for directors, actors, and production crew who can still remember the plot.

Solutions and resources from Take Back Your Power:

Josh del Sol is the director and producer of Take Back Your Power, a revelatory documentary feature film uncovering the worldwide ‘smart’ metering and grid agenda. Watch the film and subscribe to updates at www.takebackyourpower.net, where this article first appeared.

Be the first to comment on "The Real Consequences of Corporatism, “Smart” Grid and Corrupt Government"