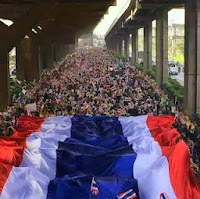 Monday December 9, 2013 at 9:39am was set to be the largest anti-regime rally yet in Thailand’s latest bid to oust the Wall Street-backed dictatorship of Thaksin Shinawatra. Even the night before, massive numbers of people flooded into several protesting sites, and by morning a torrent of tens of thousands poured through the streets of Bangkok to join them.

For miles in every direction, protesters could be seen streaming to and from protest sites on foot, by train, subway, bus, car, motorcycle, and bike. Several organized mass rallies marched through the streets, while thousands upon thousands made their own way. Food courts, restaurants and cafes across the city were filled with protesters staging in small groups before setting out with larger ones.

By evening, the trademark Thai flag arm bands, ribbons, and flags could be seen carried by people scattered all over the city. Areas such as the prime minister’s office (Government House), were filled to capacity and no longer accessible by additional protesters. Impressive protest sites that had occupied the entire width of major roads in the city for weeks, now had protester camps sprawling deep into side streets. Image: In what is usually an empty intersection on the edge of one permanently occupied protest site, has been filled to capacity by protesters on Monday, December 9, 2013. This second historical turnout in as many months has further shaken the illusion that the regime commands the support of the vast majority of the Thai population. The regime would go on to cancel a planned counter-rally scheduled for the next day, surely to be embarrassingly dwarfed by today’s events.

Videos: Just 2 of 9 separate main protest groups on the march, set to merge at Government House later on during the day. There were also up to 40 smaller groups organized by schools, unions, and other organizations, as well as a constant stream of thousands of individuals, families, and groups of friends moving to and from the different protests on their own.

While numbers are not in yet, it is safe to say several hundred thousand at the very least were present in the streets at any given time, and that the number of overall participants throughout the day was well over a million. In the suburbs late that night, miles away from the protest sites, groups of protesters could still be seen traveling together in small groups either returning home, or setting out to camp overnight in the center of the city.

The Message is Clear: Thaksin is Never Coming Home

With the vast resources of Wall Street and his own personal ill-gotten gain, de facto dictator of Thailand, Thaksin Shinawatra, has never managed to marshal so much support. His counter-rally planned for the next day in a nearby province was canceled – his regime claims because it has already stepped down and is waiting for elections. However, realistically, the fight is far from over, and if Thaksin had the support, now would be the time to show it. It simply isn’t there. Image: Regime thugs line the streets in Thaksin Shinawatra’s rural stronghold, the province of Udon Thani in the nation’s northeast. Their goal was to intimidate would-be protesters into not taking to the streets, as hundreds of thousands were all over the country else where. Despite the fear and division Thaksin has tried to sow in the Thai population, protesters in Udon Thani still marched.

Even in his stronghold, the rural northeast of Thailand, anti-regime protesters flocked to provincial halls. In what could be considered one of the the very centers of his support, the province of Udon Thani, the regime deployed thugs armed with clubs, but still failed to deter protesters from demonstrating. The barriers of fear and helplessness carefully created and cultivated by the regime, are at last crumbling.

While Thaksin may have no true support in the streets, what he does have is an impoverished, intentionally poorly educated, exploited, and manipulated constituency at the polls. They are eager for his destructive populist policies, either indifferent or ignorant of the short- and long-term damage they will do (and already have done) to the country. He is eager to call for elections he knows he will readily win with reckless handouts no other party would be irresponsible enough to propose, in an attempt to once again return himself and his proxy regime to power.

Why Elections are Currently Unacceptable

The regime’s current strategy is to appear reasonable, even soft, in the face of unreasonable demands and “mobs” it and its Western backers have portrayed as violent. By calling for elections, it is hoped that the average onlooker only sees a government attempting to do the reasonable and “fair” thing – to let the “people” decide. What it doesn’t want onlookers to see is how it has rigged the elections through cartoonish campaign promises (cars, houses, free computers, overpaying for rice) readily believed by an exploited electorate.

And while the country is officially run by prime minister Yingluck Shinawatra, her position is one in title only. Her brother, Thaksin Shinawatra openly runs the country from various locations around the world, as he evades a 2-year jail sentence, 2 arrest warrants, and a lengthy list of pending court cases. His “openly running” the country is not merely the accusations of his political opponents within Thailand, but the observations of Western journalists as well. Earlier this year, the New York Times wrote in its article, “In Thailand, Power Comes With Help From Skype:”

Millions of people across the globe have cut the tethers to their offices, working remotely from home, airport lounges or just about anywhere they can get an Internet connection. But the political party governing Thailand has taken telecommuting into an altogether different realm.

Of course, this fact is now conveniently skipped over by the same Western media, or brushed off as insignificant, now that the regime’s credibility has been called into question and it clings desperately to power. Another election would only see another proxy put into place for Thaksin to remotely direct from his private jet, 5 star hotel in Dubai, or luxury lodgings in Cambodia or Hong Kong.

The enduring myth used to justify Thaksin’s grip on power is that he holds popular support across Thailand. However, this myth can easily be challenged by election results themselves and detailed electorate surveys carried out by Thaksin’s own Western backers.

According to the Election Commission, in 2011’s general election, Thaksin’s proxy party received 15.7 million votes out of the estimated 32.5 million voter turnout (turnout of approx. 74%). This gives Thaksin’s proxy party a mere 48% of those who cast their votes on July 3rd (not even half), and out of all eligible voters, only a 35% mandate to actually “lead” the country.

And while careful choreography is used to portray Thaksin’s so-called “red shirt” supporters as omnipresent and holding a commanding majority across Thailand’s political landscape, a detailed survey of Thailand’s electorate in 2010 revealed a mere 7% identified themselves as being “red,” with another 7% considering themselves only “leaning toward red.” The political rank and file that support Thaksin’s opponents in the Democrat party have an equally unimpressive following – leaving what is widely referred to in Thailand as the “silent majority.”

The silent majority, in recent months, is silent no more. People who have avoided Thailand’s color coded political struggles have decided Thailand would be better without the Shinawatra family, their regime, their political machine, including the “red shirt” movement, and the foreign interests that have propped them all up for the last decade. They do not follow the leaders on stage, but rather the idea of uprooting this regime and preventing another from taking its place.

With a second unprecedented display of dissent against the ruling regime, and with prime minister Yingluck Shinawatra dissolving the parliament, the next battle will be to challenge the regime’s intentions of simply re-installing itself in another round of stolen elections. Protest leaders had promised to end the rally today if no one showed up – of course, the rally will now continue on, building additional pressure upon the regime until it can finally be lifted up from the ground, and hauled away for good.

Be the first to comment on "Thailand: Historic Turnout Shakes Regime"