The Federal Reserve System is a parasite that feeds off human suffering. It is indeed the dragon that must be slayed for humanity to experience true freedom. I want to End the Fed, but I want it to end as peacefully and orderly as possible. That is why I buy Bitcoin.

In June 2011, I wrote this about Bitcoin: “It seems the precise remedy to such a system would be decentralization of currency and banking, or functioning in an underground economy outside the system. There may be hope for accomplishing both with the crypto-currency that is beginning to gain recognition, the Bitcoin.”

Over two years later, Bitcoin remains by far the best, most disruptive tool we’ve ever had to overthrow the corrupt banking system. Before Bitcoin, our only option was to fight the current system with protests and begging our politicians to “audit” the Fed, all while arguing about what’s a better replacement; the gold standard or public debt-free money. There have been few viable ways to simply opt out of or withdraw our consent from the current financial matrix, until Bitcoin.

I view my monthly Bitcoin purchase as a donation to unseat the bankers as the puppet masters of our world.  If it gains in value, fantastic, but I will never sell them for dollars. If vendors choose not to accept them, then they won’t get my business. If it goes to zero; well, it was certainly a better option than contributing to Campaign for Liberty to get a partial audit of the Fed, right? But, to be clear, I’m firmly convinced that Bitcoin will be the world’s reserve currency.

Actually, the Bitcoin protocol has more potential than merely rendering the banks and Wall Street obsolete. It could become the global ledger of companies, stocks, contracts, patents, insurance and so on without the need for paper pushers in the middle. This protocol changes everything.  The sooner you comprehend that, the better for you and for society. But that’s a whole other article.


For now, here are ten ways Bitcoin is better than the Federal Reserve System:

Voluntary: Bitcoin is voluntary, whereas Federal Reserve notes are enforced at the barrel of a gun domestically and by a vast military complex abroad. Yet, no army can stop an idea whose time has come. Americans now have a choice in Bitcoin — and China, Russia, and many others are dropping the dollar like a bad habit in global trade. A police state or more war can’t stop the rush out of dollars, though they will try.

Decentralized: Bitcoin has no central authority voting to give your money to their friends. Being decentralized also gives Bitcoin its security because there’s not one website or company that can be hacked, corrupted or seized.

Supply Controls: The supply of Bitcoin is controlled by a fixed algorithm where only 21 million will ever be created, although it’s nearly infinitely divisible. The Federal Reserve System has no supply controls over its unit of account. They can print and lend as much into existence as they want, and do it in secret.

Transparent: The Bitcoin protocol code is open source, as is its ledger of every transaction ever made. The first ever partial audit of the Fed revealed over $16 trillion in secret bailouts before they quickly closed their books again to public representatives tasked with controlling the purse strings.

Free Market Value: The value of Bitcoin is based purely on the free market’s voluntary adoption of it due to its utility as a payment system protocol.  Sure some is speculation, but well deserved. Although many market mechanisms exist that contribute to the value of Federal Reserve Notes, ultimately it is about supply n’ demand and interest rates which are manipulated by an unaccountable board of directors. 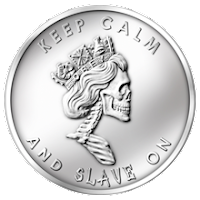 Debt Free: There is interest owed on every dollar created in the Federal Reserve System.  That interest is money yet to be created, which perpetuates a system of exponentially growing debt deliberately designed to gain control of entire populations. It’s indeed the greatest scam in the history of mankind. Bitcoins, on the other hand, are interest-free and transaction fees are microscopic.

No Middlemen: There are no middlemen needed to use Bitcoins. No middlemen making free money from government bonds. No middlemen charging high fees to store and use your money. No SWIFT clearing house needed to collect a fee to verify and approve global transfers. Gone. Bitcoin makes them all irrelevant.

No Favoritism: During the 2008 financial crisis the Federal Reserve and the US government literally chose economic winners and losers depending upon who they gave special bailouts to. Only innovation and production will choose the winners and losers in the Bitcoin economy.

No Income Tax: The Federal Reserve Act of 1913 was quickly followed up by the income tax. Without the income tax, debt-based money could not exist.  Bitcoin needs nothing but voluntary cooperation to exist, and you might be able to hide transactions from the IRS. This one should get double points on this list.

Gain in Value: When a currency is increasingly devalued, salaries will consistently fall behind the cost of living. The Federal Reserve System should be viewed as the number one cause of poverty. Bitcoins are naturally deflationary because of its fixed supply. As more people adopt them, the more they’ll be worth. It’s that simple. Meanwhile, the Fed is still printing like crazy as the world moves away from the dollar. Which would you rather be paid in or invest in?

I know there are naysayers in the alternative community; gold-silver purists, some preppers, and the “it was started by the NSA” crowd. Of course gold, silver, food, tools and skills of independence are excellent investments in this current environment. Yes, get those things first. But just buy a small amount Bitcoin, use them, and learn about them. Invest them in other altcoins.

When you experience how it works and what it’s capable of you will instantly know the value of it — not conceptualize or rationalize — but know the power of this technology. Barring an unforeseen catastrophe, it will render bankers and Wall Street completely obsolete. And it is highly unlikely that it can be stopped.

In short, I buy Bitcoin as an act of defiance. I consider them a donation to build something better. I buy them because I support uninhibited free trade between peers without asking for permission or giving a cut to the mafia. Finally, I buy them because I think they’re a safer bet than holding dollars.