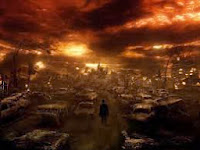 We all have our own ideas about what the terminal event will be. The event that above all others, tips mankind over the edge, throws us into a level of turmoil that the human race has never experienced before.

After doing a great deal of reading, and visiting dozens of websites devoted to our survival after such an event, it seems that failure of the power grid, and a total economic collapse are the two things that are at the forefront of most people’s mind.

It’s easy to see why these things should feature so prominently, they both affect the fabric of the society we live in. If one of them happens it could without too much imagination lead to the other.

Obviously there are many other things that could go wrong, Yellowstone could blow its top, a coronal mass ejection could hit, or a new ice age could begin. The list is almost endless. Some people will survive, of that there is little doubt, but surviving well is a different thing entirely.

To me, prepping is something I do to help me live after such an event. I want to do more than exist; merely existing is something that should be reserved for those who have put no effort into preparing. Those of us who have prepared deserve to benefit from those preparations.

Regardless of what most believe, that is that urbanites will perish in the first zombie wave, I refuse to accept this. I refuse to give up, it is not part of my character. I have moved from the city to a much smaller town, but the dreams of rural isolation still exist, alongside my city mindset.

My dream version of my life sees me with a charming log cabin and a gun in my hand; and in my dream these things would enable me to live happily ever after. The reality is I would probably freeze to death the first winter or shoot myself in the foot and die of infection.

The reality of the situation rarely measures up to the dream and often comes as a huge shock. Regardless of our location, our needs are in essence the same. Food, water, shelter, heat, health and a way to defend ourselves. Removing any one of these will most likely lead to our demise. Having them all, however, will not mean we will make it.

State of mind plays a massive part in survival situations. I am not just talking about the will to survive though obviously that is essential. Depression will be a constant bedfellow in dire circumstances. Everyone will experience days when they wonder if it’s worth it, if they can go on.

Everyone has different coping mechanisms that they employ in their daily lives, and if at all possible these mechanisms should continue to be a part of our lives after the arrival of the crisis.

Routine and ritual gives us a sense of continuity, a taste of normality, that can help keep us calm in adverse circumstances. Try to incorporate something that uses little of your resources into your daily routine before the event, so that you can continue to employ it afterwards.

This can be anything: five minutes with a crossword puzzle, meditation, prayer, singing; whatever allows you to detach for a few moments from the stress of the situation you find yourself in.

Many will decry this as psycho-babble, it is not. Depression and constant high alertness actually alters the chemistry of the brain which affects both focus and function in a relatively short space of time, this is something you cannot afford to have happen to you in a SHTF situation. Constant high alert stress can lead to incidents we read about, where a soldier snaps and turns his weapon on those around him, or where a model but under pressure worker can take no more and blows his brains out.

Depression leads to the opposite, you go through the motions but nothing gets done, you fail to see you are neglecting important tasks, and even if you notice, or it is pointed out, it will make little difference. Both of these situations are possible, but you may suffer from neither, you may suffer from one or the other, or from both at different times either under the same or different conditions.

We have no idea what the situation will be and therefore we can have no idea how we will react to it. We all make plans to deal with whatever comes our way, we make plans for how we will occupy our children, care for our elderly, even how we will feed our pets, but little is said about taking care of our own emotional health.

The demands that a crisis situation will make on us are varied and many and as it will be a situation of a magnitude none of us have faced before we cannot assume we will manage to make it through without issues. Taking time to think about this, how you will cope with the demands made upon you, both physically and emotionally can at least allow you assess your emotional health as it stands now and how it changes as you move through the crisis.

Delegation of certain duties and responsibilities in times of crisis is beneficial to the entire group, not least to the person charged with the role of team leader, or head of the group. Even quite young children can be part of the team, being assigned some minor responsibility will make them feel part of what’s going on and will teach them skills that will be valuable to them later in life.

Even those seniors in the family or group who are no longer capable of hard physical work should be given responsibility for something in order that they do not feel a burden. If you know in advance who will be a part of your group, thinking about which tasks will be allocated to whom will make the transition far smoother than leaving it until disaster has struck to start discussing it.

This is the basic principle behind major catastrophe teams operating all over the world. By everyone having a pre-designated list of tasks the team works well together without wasting time and energy, both of which are extremely valuable in a crisis situation.

Whatever we face in the future being aware of the negative side effects of stress can help us plan accordingly, allowing us to maximise the potential of our survival group. A strong leader is one who provides solid foundations that the group can build on both emotionally and physically. Having this firm basis will make the challenging conditions that we all know are coming our way far easier to bear.

Contributed by Lizzie Bennett of Underground Medic. Lizzie Bennett retired from her job as a senior operating department practitioner in the UK earlier this year. Her field was trauma and accident and emergency and she has served on major catastrophe teams around the UK. Lizzie publishes Underground Medic on the topic of preparedness. This article was delivered by The Daily Sheeple.

Be the first to comment on "Tipping Point: The Time When Your State Of Mind Will Make The Difference Between Life And Death"