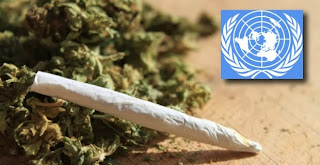 Once again, the United Nations’ General Assembly meeting in New York City has become a forum for calls for drug reform. Leaders from Latin America took the opportunity this week to criticize drug prohibition and challenge the world body to come up with better alternatives.

“Right here, in this same headquarters, 52 years ago, the convention that gave birth to the war on drugs was approved. Today, we must acknowledge, that war has not been won,” Colombian President Juan Manuel Santos told assembled world leaders Tuesday, referring to the Single Convention on Narcotic Drugs of 1961. “And I say this as the president of the country that has suffered more deaths, more bloodshed and more sacrifices in this war, and the country that has also achieved more results in the fight against this scourge and the mafias that underpin it.”

The Colombian president’s remarks echoed those he made last year at the Summit of the Americas, which commissioned the Organization of American States to study new approaches to dealing with illicit drugs. That study was issued in May, and Santos said the UN should give it serious consideration before a General Assembly Special Session on Drugs set for 2016. That session was proposed by Mexico and accepted by the General Assembly.

Also on Tuesday, Costa Rican President Laura Chinchilla said that her nation “joins the call from other States from our region, such as Mexico and Guatemala, to reevaluate internationally agreed-upon policies in search of more effective responses to drug trafficking, from a perspective of health, a framework of respect for human rights, and a perspective of harm reduction.”

That language is from a consensus statement elaborated and agreed on by Santos, Chinchilla, Guatemalan President Otto Perez Molina, and Mexican President Enrique Peña.

On Thursday, it was Perez Molina’s turn. A former general elected to office on a promise of taking a hard-line against organized crime, Perez Molina last year became the first sitting head of state to call for legalizing the illicit drug market at the UN last year. This year, he was still singing the same tune.

“Since the start of my government, we have clearly affirmed that the war on drugs has not yielded the desired results,” Perez Molina told the General Assembly. “We cannot keep on doing the same thing and expecting different results.”

Instead, global leaders must seek new approaches to drug use centered on public health and prevention and designed to reduce violence and respect human rights, he said. Perez Molina also praised voters in Colorado and Washington for their “visionary decision” to legalize marijuana and praised President Obama for “respecting the voice of the citizens of Colorado and Washington, to allow these innovative experiences to provide results.”

Perez Molina also praised Uruguayan President Jose Mujica for proposing marijuana legalization legislation there “instead of following the failed route of prohibition.” That bill has passed the Uruguayan House and is expected to pass the Senate easily next month. Perez Molina and Mujica also met Thursday in a private meeting.

Mexico’s Peña Nieto cancelled his appearance at the UN to deal with the aftermath of the killer hurricanes that swept his country last week, but his foreign minister, Jose Antonio Meade Kuribena, echoed the language of the other Latin American leaders, adding that the consensus statement was also supported by Chile, Paraguay, and others.

The calls for reform from the Latin Americans, whose countries have suffered some of the gravest consequences of the war on drugs, are growing ever louder, and it now appears that the 2016 Special Session could see real fireworks over the issue—if it even happens. While the General Assembly has approved it, the UN Office on Drugs and Crime is opposed, and the International Narcotics Control Board is resolutely oblivious.

Phillips Smith writes for StopTheDrugWar.org where this article first appeared.