Resorting to name-calling, the United Kingdom’s legitimacy slumped further still as it stubbornly maintained its support for terrorists attempting to overthrow the Syrian government, now unsuccessfully for over 2 years. Unlike in Libya where NATO was able to militarily intervene directly and overthrow the Libyan government before the public realized the so-called “rebels” were in fact the US State Department, United Nations, and the UK Home Office (page 5, .pdf)-listed Al Qaeda terrorist organization, the Libyan Islamic Fighting Group (LIFG), the West’s assault on Syria has dragged on much longer. 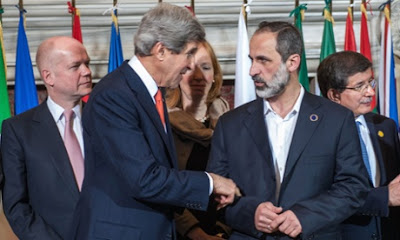 Image: (left to right) Foreign Secretary William Hague, US Secretary of State John Kerry, and the Al Qaeda-coddling Moaz al-Khatib, are all, by US criminal code, providing material support to terrorist organizations, more specifically, Al Qaeda. Hague has even expressed a desire to directly arm these terrorists.

So long in fact, that the entire world is now acutely aware of the so-called “rebels,” their overt affiliations and membership among Al Qaeda, the serial atrocities they’ve committed, and the draconian, barbaric sectarian (and quite “undemocratic”) rule they plan on imposing, already on display in northern Syria where extremist cleric, Moaz al-Khatib, designated by the West as the “opposition leader,” recently visited.

Al-Khatib is portrayed as a “moderate” by the Western media, which makes a point of repeating this every time al-Khatib’s name is mentioned. His profile, as provided by the BBC states:

“We demand freedom for every Sunni, Alawite, Ismaili (Shia), Christian, Druze, Assyrian … and rights for all parts of the harmonious Syrian people,” he said after being elected leader of the National Coalition.Of course, his carefully crafted image and rhetoric is overshadowed by his actual deeds, which included his openly embracing Al Qaeda in December of 2012, demanding that the US delist Al Qaeda’s Syrian franchise, al-Nusra, as a terrorist organization. Reuters quoted al-Khatib as saying:

The decision to consider a party that is fighting the regime as a terrorist party needs to be reviewed. We might disagree with some parties and their ideas and their political and ideological vision. But we affirm that all the guns of the rebels are aimed at overthrowing the tyrannical criminal regime.

Al-Khatib’s comments not only indicated his support for Al Qaeda, but revealed his “opposition” front’s collaboration with the terrorist organization, admittedly leading the fighting across Syria from Daraa in the south, to Idlib and Aleppo in the north, and all along Syria’s border with Iraq, where the very extremists the US fought for nearly 10 years are slinking over the border and now being portrayed as “freedom fighters” by the Western media. It should also be noted that al-Nusra is guilty of some of the most heinous atrocities of the Syrian conflict, including a recent, indiscriminate car bombing in Damascus which killed over 50 people, including school children.

More recently, Al-Khatib, even as he prepared to receive millions in aid from the West, including the US and UK, reiterated his support for Al Qaeda.

Coalition chairman Mouaz al-Khatib angrily appealed for a humanitarian corridor to the besieged city of Homs and said the rebels are tired of Western complaints about extremists in their ranks. He argued that the real enemy is the Assad regime but said too many outsiders are worried only about “the length of a beard of a fighter.”

“No terrorists in the world have such a savage nature as those in the regime,” Khatib said in Arabic.

The Syrian opposition leader’s finger-jabbing anger was in marked contrast to Kerry’s clipped and measured tone. Kerry looked at Khatib without expression as the Syrian spoke.

Al-Khatib’s history as a “cleric,” and his continuous, open, and adamant support for Al Qaeda, even in the wake of repeated atrocities, should be a prompt for the West to add him and his “opposition” organization to its list of foreign terrorist organizations. Anti-terrorist legislation in both the US and UK stipulate that any individual or organization providing material support for a listed terrorist organization is guilty of a criminal offense. Clearly not only does al-Khatib qualify, but so does US Secretary of State John Kerry and his British counterpart Foreign Secretary William Hague, as they hand Al Qaeda-coddling al-Khatib millions to carry on his open support of terrorism.

Syrian President Bashar Al-Assad recently berated the West for its hypocritical support of terrorism in Syria, and likened the West’s attempt to portray itself as attempting to bring peace to Syria to an arsonist trying to put out a fire. While the UK’s Foreign Secretary William Hague resorted to juvenile name-calling as he dismissed accusations that his government is sponsoring international terrorism, President Assad is simply reading articles dating back to 2007 where Western officials openly admitted their plan to use terrorist extremists to overthrow the Syrian government – not for promoting “democracy,” but specifically to undermine and overthrow Iran in turn.

Both Pulitzer Prize-winning journalist Seymour Hersh’s New Yorker 2007 article, “The Redirection,” and the Wall Street Journal‘s 2007 article, “To Check Syria, U.S. Explores Bond With Muslim Brothers,” tell a narrative of a West actively arming and funding sectarian extremists with direct ties to Al Qaeda even then, to begin undermining and overthrowing both Syria and Iran. The conspiracy admitted to then, is now openly being executed to horrific effect in Syria and along its peripheries.

William Hague and John Kerry can deny, spin, and cover up the fact that they are funding and arming Al Qaeda either directly or through a series of increasingly obvious proxies, millions to overthrow the Syrian government, but Syrian President Assad is by no means “delusional” as Hague childishly accused, for pointing out this documented and increasingly transparent conspiracy. Hague, it would appear, would also have us believe the New Yorker‘s Seymour Hersh and the staff at the Wall Street Journal are likewise “delusional.”

It is important that we identify the corporate-financier interests driving this increasingly unhinged, unraveling agenda – interests we most likely patronize on a daily basis, and both boycott and permanently replace them to erode the unwarranted influence they have used to both plan and execute this assault on Syria’s people. Today it is Syria, surely tomorrow, if they succeed, it will be us.